Harry Vatiliotis has been crafting exquisite violins for 65 years, and has a reputation for speed and affordability. But with a big milestone looming, the Cypriot-Australian is preparing to carve what may be his final instrument ever. 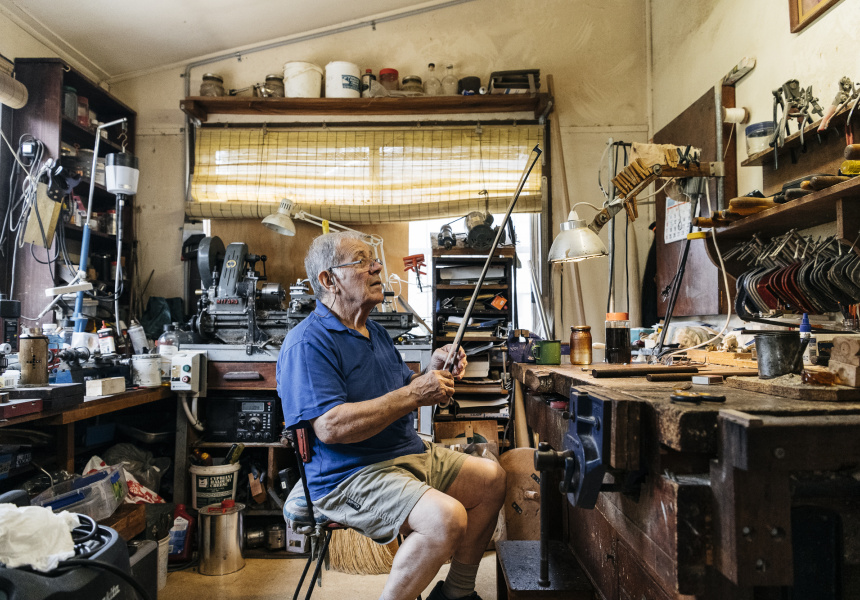 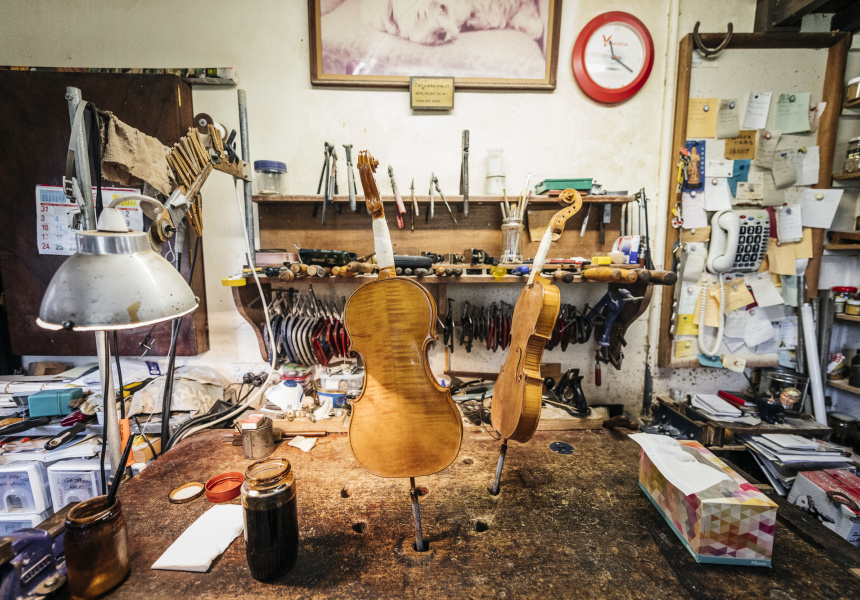 “Ooh, it’s getting closer,” Harry Vatiliotis says as he scans a handwritten ledger of all the people he’s made violins for. “Only 23 to go. I want to make 800 before I retire.”

In his 65-year career the prolific luthier (someone who makes instruments with strings, a neck and sound box) has singlehandedly made 777 violins, with a handful of violas, cellos and double basses thrown into the mix. By contrast, Antonio Stradivari, history’s most famous violin-maker, is estimated to have made 960 violins with the help of apprentices.

While a Stradivarius is imbued with history, status and often a million-dollar price tag, a “Harry” is a humbly made instrument crafted in a cluttered workshop in Concord.

In the Australian violin world, Vatiliotis is well known for his skill, speed and for the fact he sells his exquisite instruments inexpensively. “He charges $6500,” says Romano Crivici, a composer and old friend of Vatiliotis’s. “But I’ve seen him charge half that price if he thinks a student is talented. It’s a bit of a social service; he’s always wanted to do the right thing.”

Crivici tells stories of professional musicians doing blind tests of a Harry alongside a $25,000 Ceruti made in the 18th century, and preferring the sound of Vatiliotis’s instrument. “He’s well respected by those who are interested in sound rather than status or mythology,” Crivici says.

It’s clear Vatiliotis has an unusual talent. He made his first instrumental in 1953, at the age of 17, as an apprentice at AE Smith, which, according to the Museum of Applied Arts & Sciences, is “Australia’s finest violin maker to date”. The museum commissioned one of Vatiliotis’s violins in 2001 and his first instrument will be bequeathed to the museum when he dies. “I made that on my mother’s sideboard at our house in Surry Hills with a chisel, knife and a bronze thumb plane,” Vatiliotis says. “I’m not boasting, but none of the people I’ve taught ever equalled that first violin. I must have had a little bit of talent.” He breaks into a laugh.

When asked how he made a violin with no training, he shrugs. “I have a lot of skill with my hands. After I arrived from Cyprus, I worked at Eveleigh Railyards as a metal worker. When you work in metal, you’re measuring a 1000th of an inch. In wood, it’s only a 16th.”

That first violin hangs in a glass box, on a cabinet in the corner of the room. A mountain of clutter laps at its sides: papers, a crumpled beige hat, a red canister of Mortein. Seeing that glorious instrument in this environment is a metaphor for Vatiliotis himself: genius juxtaposed with the everyday and unremarkable.

Across the room, on a dining table, seven violins are at different stages of assembly. They’re all unvarnished. Some have their bellies carved round, while others are flat, resembling the wedges of European maple they were cut from.

The rest of the workshop is cluttered with tools, pots of glue and a half-century of detritus. Vatiliotis picks up a partially finished violin belly that’s propped up on the floor so he can demonstrate a crucial part of creating the tone: arching.

He takes a handmade wood caliper (a precise type of ruler), adjusts it to five millimetres and inserts the back of the violin in between the two arms. “This marks the high spots.” He slides around the pen that’s wedged in the caliper, drawing a squiggly line wherever the wood is close enough to touch the pen. “See how it tapers up there? I need to take that down.”

“This is the thickest part,” he says, indicating an area near the E-string. “We want a little substance there to give the high pitch. The thinner it is, the lower the sound.”

He secures the timber in a felt-lined violin-shaped cradle, chooses a chisel and starts to carve. Scrape, click, scrape, click. Curls of maple fly. The sound has the confident rhythm of 65 years of repetition. “My arching is like my signature, so it’s always much the same,” he says. “I know what it looks like, so I just keep going until I get there.”

He doesn’t measure as he goes. Weight is the key. “You don’t want to go below 70 grams or you get a real woofy sound, like cardboard. This one is a beautiful light piece of wood. I’ll finish around 74 grams and by the time I sandpaper, it’ll be 72. Beautiful.”

Once he’s finished arching, he’ll assemble the back and sides, then cut two serpentine holes in the face by hand. Known as f-holes, these openings amplify the sound of the violin. Finally, he’ll close it up, carve the scroll and neck, add the fingerboard and secure it to the body.

Twenty coats of varnish come next, and at the end Vatiliotis will apply glue to a label and push it through the left f-hole and onto the bottom of the finished instrument. The whole process takes most luthiers months to complete. “I’ve seen Harry make four violins in a month,” Crivici says.

For someone who’s spent most of his life perfecting this craft, it’s hard to imagine Vatiliotis simply retiring. “People tell me when I go, I’ll be up there listening to my music,” Vatiliotis says. But he’s not religious. “If there is anything like [heaven or hell], I’ll probably be down below looking around with a periscope seeing who was mucking around with my instruments.”

For the last hour Vatiliotis has been twisting a strip of veneer with his fingers. He tosses the now-tight spiral over his shoulder into the door of the workshop. Then he folds up his ledger, tucks it back into a glass jar and replaces the lid.

In the jar is a stack of white labels printed with the name “CA [Charalambos Andreas] Vatiliotis”. Each one is waiting for Harry’s signature, a number and a new violin to stick to. There are plenty more than 23 left in the stack.

“Australia has gotten used to Harry as this incredibly generous, clever, fast guy. He’s a fixture and I don’t know what’s going to happen when he shuts down.”
– Composer and violinist Romano Crivici

“Of the many makers who trained under Smith, it’s Harry who has a knack for making great instruments with great sound. There’s nothing pretentious about him.”
– Robert Harris, former principal viola at the Australian Chamber Orchestra

“Harry was taught by the most significant Australian maker, AE Smith. We felt he’s important enough that we should have an instrument made specially.”
– Damian McDonald, curator at the Museum of Applied Arts & Sciences

“I got to see the violin Harry made me progress from a chunk of wood to a finished violin. It’s really versatile and works as a solo or ensemble instrument because it carries and blends.”
– Julia Lim, student