Emily Floyd’s new graphic sculpture is not what it claims to be. 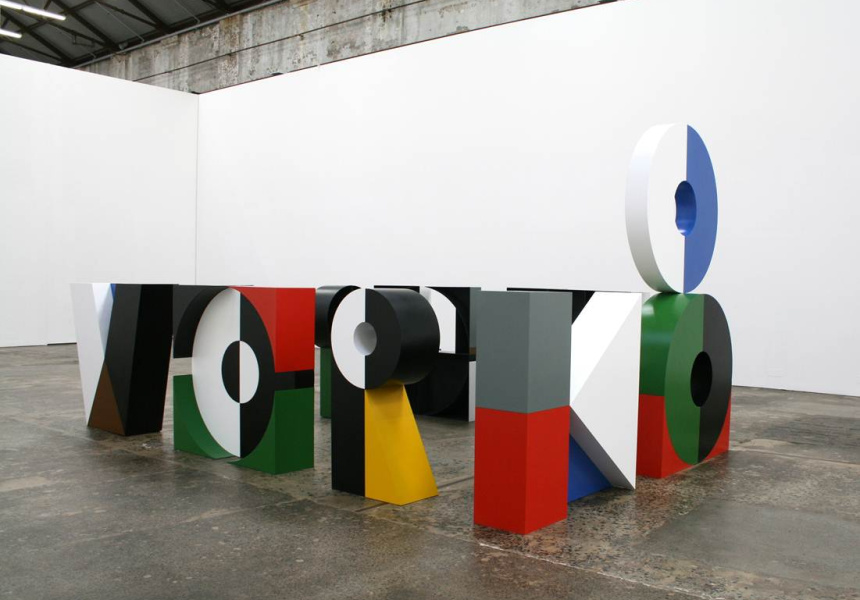 Emily Floyd has created a colourful, graphic and sizable new sculpture that, even at its grand scale, somehow still has to compete with the cavernous train yard hangar that is Anna Schwartz Gallery Sydney. WORKSHOP, 2012 is an artwork that varies in dimension but stands at around a meter and a half tall in most places and almost twice that in others. It comprises primary and secondary coloured shapes that appear like a child’s building block set on growth hormones, which spell the word WORKSHOP, somewhat abstractly, in capitals.

Taking its leads from political, literary and theoretical writing, the typographic forms are based on alternative learning such as Free-school Education and the designs of 1920s Bauhaus toymaker Alma Siedhoff-Buscher, as well as a 1980s political pamphlet for the workshops of The Broad Political Left. These pedagogical systems share “a design that fosters experimentation within defined structural parameters” just as this work – with its shapes and colours – could create varying sculptures in varying configurations.

Enlightening the design-fundamental forms and architecturally positioned elements is the listing of its materials on the room sheet, which cites Ferrador (the Portuguese word for a blacksmith or horseshoe maker), a paint famously used on the Sydney Harbour Bridge among other steel surfaces. The paint, surely intentionally, becomes a fitting material within the location – a once workshop that now houses the gallery.