Renowned architect Kelvin Ho has added a new string to his bow: set design for The Australian Ballet. Award-winning architect and designer Kelvin Ho has designed retail spaces for some of Australia’s top names in fashion and hospitality, including Dion Lee, Willow and Lover, as well as three Justin Hemmes ventures: Newport Arms, Coogee Pavilion and The Paddington. He's also working on the first Australian store for surf and streetwear brand, Saturdays NYC, set to open in Bondi this year.

It’s been a charmed career, and one the young Sydneysider thrives on, but lately he’s been working on something new for his upcoming debut as a set designer on the Sydney Opera House stage for Filigree and Shadow, a collaboration with The Australian Ballet and resident choreographer Tim Harbour.

“It’s so exciting. Coming from an architectural background and having spent so much time as a student studying the Sydney Opera House, to have the opportunity to have one of my pieces in there is incredible,” Ho says.

Ho and his Surry Hills-based team at Akin Creative have spent the better part of a year working with Harbour on his short new contemporary work for The Australian Ballet, part of the triple bill program titled 20:21.

He was invited to collaborate with Harbour after meeting artistic director David McAllister, who was impressed by Ho’s creative processes designing for fashion and felt they could translate well to the stage.

For Filigree and Shadow Ho and Harbour have collaborated with electro-acoustic German electronica duo 48nord and lighting designer Benjamin Cisterne. Their abstract work grew out of the concept of birds in a thunderstorm – all charged electricity, ferocity and ultimately stillness – and involves 12 dancers hurling themselves in and around the clean, simple painted plywood and canvas set.

An intelligent, collaborative designer, Ho relished the unexpected challenges of creating a set that would suit both the Victorian Arts Centre and the Sydney Opera House and could be potentially packed into shipping containers to be reused abroad.

“The most interesting [aspect] was the lighting, seeing how powerful and spontaneous it is, because much of it came down to the week before opening,” says Ho. “It’s definitely opened up a new way of thinking. I’d like to pursue some similar concepts relating to form and shadow and incorporate them into permanent spaces.”

Ho is renowned for his ability to translating his clients’ vision, so it’s no surprise one of his greatest moments was seeing Harbour’s and the dancers’ reactions to the completed set on stage.

“It was amazing to walk in and see their first response. The set was as much about the audience as it was the dancers responding to something physical on stage.” 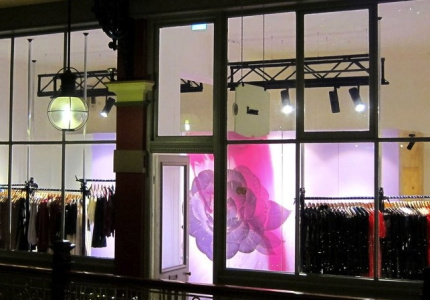