Produced by Broadsheet in partnership with Mercedes-Benz.

How This Award-Winning Table Was Made

In late 2016, Nancy Ji won the Mercedes-Benz Design Award by Broadsheet, with her entry for a unique outdoor table. In partnership with Mercedes-Benz and furniture makers Tait, we find out how her win was just the beginning. 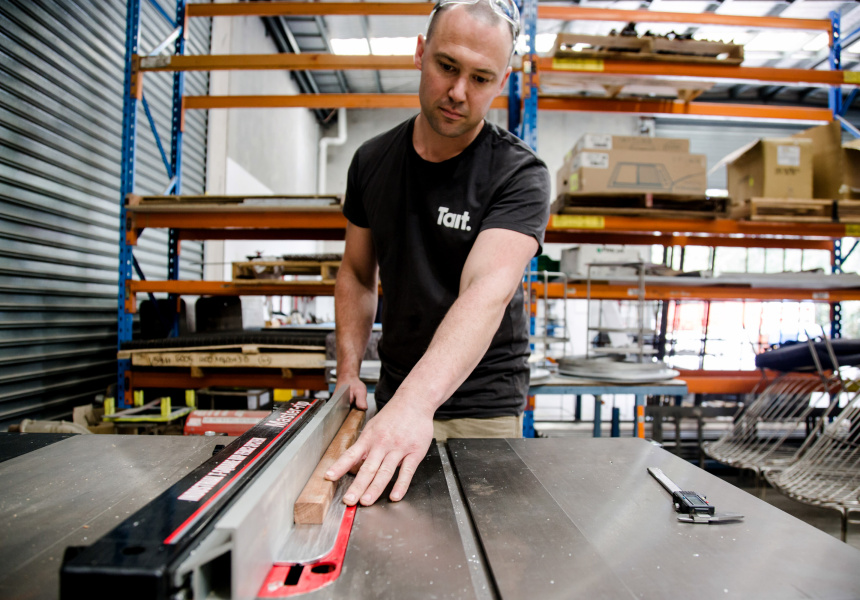 Nancy Ji’s buzz had barely subsided from winning the Mercedes-Benz Design Award by Broadsheet in early December, when the Melbourne designer returned to work. With outdoor furniture maker Tait scheduled to manufacture her winning entry, the Lily Tray Table, and bring it to market, Ji wanted to prepare. “I went home from the awards and refined it,” she says. “I did some CAD drawings and made a little model to help see how it would be put together.”

As Ji worked, the Tait team gathered at its Thornbury factory to begin the manufacturing process. First, Tait director, Gordon Tait, conducted a review of the design, followed by meetings with Susan Tait, his wife and Tait creative director, as well as factory, showroom and sales staff about how to bring the piece to market.

Up for discussion were potential materials, how to integrate the table into Tait’s existing range, and an assessment of the design’s feasibility as a commercial product. “All these [concepts] were very new to Nancy,” says Gordon Tait, “so it was important to explore them prior to meeting with her, to advise what would and wouldn’t work.”

The team recommended tweaks such as swapping heavy steel for lightweight aluminium and adopting the industry-standard size for the tray.

Ji revelled in the experience. “We all had the same vision,” she says. “We wanted to create a product we’re both proud of. Gordon and Susan are very good at giving advice on colours and finishes, whether matte or shiny, and how they’ll go with wear and tear. I was relying on their expertise and they were relying on my judgement of the design, so I think it was a really good relationship.”

By early January, just one month after Ji won the award, Tait had crafted a prototype of the table. Gordon Tait says it often found its way home, “so Susan and I could interact with it and test it rather than relying on a factory context.”

Seeing the prototype was a revelation for Ji. For months she had only visualised it on screen or in her head and was struck by its raw state. “[The prototype] didn’t have any colour on it,” she says. “It was just bare steel so you could see where the joints and welds were, how it connected and how visible it was.” That undressing was crucial to Ji’s understanding of the process. “It's not just something I like and think is nice,” she says of her design. “I’m trying to think about what people would engage with and respond well to.”

There was also the issue of time. The tight turnaround of the table, from design to prototype to its upcoming launch deadline of March 10, posed a personal challenge for the designer – she had to cede control. “I wanted to be involved as much as possible in the production process,” says Ji. “But obviously I couldn’t be in the factory all the time. So one of the challenges was to help and provide clear instructions, but also compromise on things when needed.”

By day Ji works in an architect studio. She says the experience of designing a table, rather than a building, has given her a fresh new perspective on what it means to be a designer. “Buildings take such a long time,” she says. “I love how for small scale products like furniture, it’s now just a few months later and a prototype is ready. You really feel satisfied you've achieved something.”

Update: The Lily Tray Table is now available to purchase from Tait showrooms and online

This article presented in partnership with the Mercedes-Benz Design Award by Broadsheet.

Produced by Broadsheet in partnership with Mercedes-Benz. Learn more about partner content on Broadsheet.