Designer Henry Wilson has built his Rozelle studio using discarded shipping containers in the middle of a shipping yard. 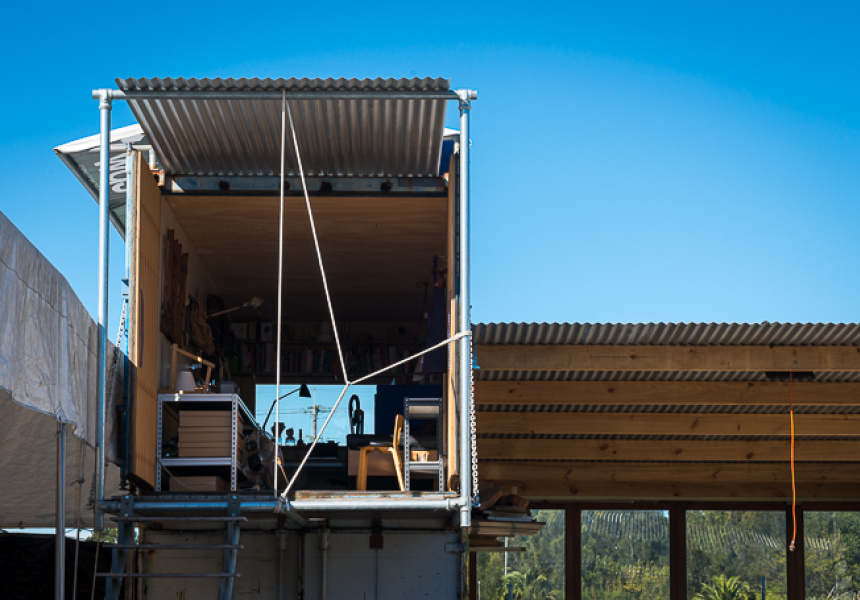 Have you ever wondered how closely some designers adhere to their own design philosophies as part of their everyday life? Well, for object and furniture designer Henry Wilson, the day-to-day is very much in tune with the “ethical and human-centred design” that he employs. The clearest example presents itself in the form of his studio in Rozelle, constructed entirely from retired shipping containers.

Occupying a dockside plot of land, with boat builders and a timber and hardware supplier as neighbours, the designer’s converted container studio is an offbeat yet welcome addition to the busy shipyard. An exterior staircase leads up to the top-level office where Wilson sits, while the ground level container is used for stock, storage and making prototypes.

The 29-year-old is amicable and open and he talks with sincerity about his work, career trajectory and the surrounding space, which he notes is still a work in progress. “I’ve got three [containers] now but I use four, in that I use the other two for walls for an outside area, so it’s sort of morphing…”

White pegboard lines one side of the interior and acts as a platform for hanging tools and other paraphernalia (including an unusual antique hiking pack picked up on one of Wilson’s overseas trips). The remaining internal space is lined with bleached plywood, while dark timber floorboards complete it. Light spills onto the desk at the back through an inserted window.

“I see [a container] as a structure that is solid, water tight and fairly easy to fit out because they lend themselves to the standard dimensions found in hardware stores for plywood and other timber components,” says Wilson. In design speak, this space would be described as ‘adaptive reuse’, and while Wilson is a believer in sustainability (“but not so much in an eco green-warrior way”), he admits that his adoption of the philosophy is often a result of impatience. “Sometimes to fast-track an idea, or get something going, I look for something that is almost there…I like to piggy back on top of things that are really sound.”

Growing up in Sydney, there was never any doubt that the young creative wanted to do something hands-on. Taking on the “arty” subjects at school, Wilson fell victim to the often frustrating NSW education system. “If you are creative, you study in the fields of drama, art, design and technology but then they all limit your UAI as they’re graded low,” says Wilson. “You get out with these marks that should correlate with other exciting things that interest you at university but when you look at the courses, they’re like 98 [percent] for industrial design.”

Fortunately there are still art schools that take students based on their portfolio and interview. Securing a place at ANU in Canberra, Wilson’s keenness to study led him away from home in Sydney at the age of 19. He looks back on his time there fondly. “I feel so blessed that my day wasn’t spent sitting in a lecture theatre; it was spent in a workshop with tools around me, making stuff.” Two years after graduating with first class honours, Wilson was once again coaxed away, this time much further to the Design Academy Eindhoven in The Netherlands – a highly regarded university pushing innovation and conceptual design prose.

Now, with a number of impressive awards to his name – most notably the Bombay Sapphire Design Discovery Award and a Qantas Spirit of Youth Award (SOYA) – Wilson has the confidence and experience to regard himself as his own client. “I am a believer that people don’t really know what they want,” Wilson offers. “So it’s my role as a designer to look ahead, see how the landscape is changing and try to provide things that are going to be useful for the future, not necessarily reactive to what’s happening at the moment.”