Previously a wrought iron factory from the 1800s, a warehouse in Botany is the new home for Chappelli Cycles, the bicycles made by Pablo Chappell and Tom Davis. Out the back will be an atelier for Pablo’s wife Elise Pioch Chappell, where she will create new scents for her candle range, Maison Balzac. 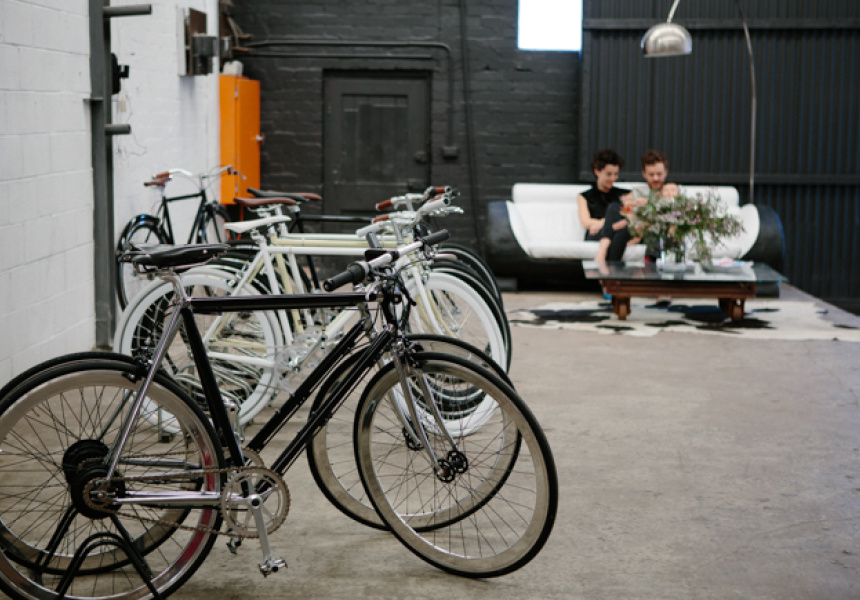 On meeting Pablo Chappell, one quickly learns an essential fact about good taste: it has very little to do with throwing around buckets of money and everything to do with the ability to uncover beauty. When Pablo chose an old wrought iron factory from the 1800s in Botany as a shopfront for his brand, Chappelli Cycles, everyone around him thought it was a bad idea. It was full of rubbish, an empty shell. Pablo stuck with it and after two months of hard work with his business partner Tom Davies, it began to match his vision.

“It’s better to buy somewhere cheap and then you can fit it out exactly how you want. We built the church ourselves, so we had all the skills and tools already,” say Pablo.

A long warehouse with white brick walls, the original sliding door lets in endless afternoon light. Bicycles are scattered around the spacious showroom area and hang from steel rafters. The walls are lined with shelves housing flat packs of the bikes.

Pablo wanted to keep it looking as industrial as possible, using only steel and glass wherever possible. The coffee tables are made from rusted parts found in the factory with a simple sheet of glass over the top; steel hooks hold helmets. The place retains its grungy industrial vibe whilst being fresh and modern, much like the Chappelli bikes, with their clean lines and vintage aesthetic.

Most other objects around the warehouse have been found – a sofa on the street of Brighton-Le-Sands, a wire chair found outside someone’s house. “I like recycling; I prefer things with a soul and a story. New furniture doesn’t really fit in an old place,” says Pablo.

Botany is not a destination people visit regularly to shop, which makes the experience of visiting a special one; you don’t want to rush in and out. “People end up staying the whole day – they tell their life story and we share ours with them,” says Elise.

“It’s a reason we don’t have much signage out the front – people can feel like they’ve made a discovery,” says Pablo. The sign they do have, created by Jim Parry from Mine Design, is magnificent: a beautiful piece of grey marble inspired by the graveyard in La Perouse. Parry also designed their logo, something that wouldn’t be amiss on the arm of one of the Italians in Baz Luhrmann’s Romeo and Juliet. “Looking at the logo, most people think we’ve been around for a 100 years,” say Pablo. The large brass bell adds to that impression. A small cross perches on the edge of the flat roof.

The space is not only important for the customers. Botany has a lot of potential, according to Pablo. “The area gives us freedom. People drop in for a beer and we end up having raging parties where we can make noise without complaints,” Pablo said. With easy access to the city and a wonderful sense of community, he is constantly discovering new things on his long, morning walk with his four-month-old daughter, LouLou. “We’ve sold bikes to all the locals and they look out for us, they bring in our packages in when we’re not here.” He and Davis can get down to business here too – winning the prestigious Australian Design Award in the their first year has made them confident in their direction and they want their bikes to become even more futuristic, to be completely different to what has been done before.

Out the back, there is an old shed, but its days are numbered. Pablo and Elise will replace it with an atelier for Elise’s line of candles, Maison Balzac – a cube made out of glass and wood with a large bench for Elise to pack her orders. It will also be a laboratory, a space for her to play and create new scents. Elise always starts blending in-house before passing it onto professionals (in Australia) to be made up. Pablo will engineer the space to be extremely well insulated. The delicate nature of fragrances and candles means that the building has to be completely temperature controlled.

At the moment, Elise’s inspiration is drawn from her wonderfully happy childhood in France – the flowers in the garden, the bees her father and grandfather cared for. In the future, she would like to incorporate elements of her second home into her candles and will grow a native garden with Mediterranean influences beside her atelier, full of herbs and a few vegetables. “It is extremely important for us to have nature around us. For every meal we cook, we try and pick a bit of thyme, a bit of native mint, it’s very, very important for us to be surrounded by nature, even if it’s a small patch, to see the greenery and the seasons pass,” says Elise.

It will not be a retail space for Maison Balzac – it’s very important for Elise to draw the line between where she creates and where she sells – but in the future, she will welcome customers or people wanting to know more about her design process to come and see the space.

Elise sums it up perfectly, “[The warehouse] is a bit off the beaten track and it’s the same with what we’re trying to do with our brands: they are a very personal thing, unique and very special.”