They tattoo together, paint together and get flown around the world by Miley Cyrus together. When Heath Nock and Lauren Winzer started chatting on Myspace in 2009, only one of them was a tattoo artist. Nine years later, the pair are married, they both ink people for a living, and together run Hunter and Fox, a tattoo parlor in Alexandria.

When they met, Winzer was working odd jobs and painting on the side. A few months in, Nock offered to teach her to tattoo. “Everyone was already ripping off her art for tattoos anyway. I told her that drawing is the hard part so she might as well learn and get the recognition she deserves,” he explains proudly.

“I was hesitant at first,” Winzer says. “Some people just do something because that’s what their partner does, and I didn’t want be like that. I wanted to be sure, you know?”

Nock let Winzer practice on him when she was just starting out. “I did my first full colour tattoo on him,” she says. “It was only two colours and if I did it now, it would take me 40 minutes, but that one took me hours. I cried twice because I was so stressed and poor Heath was hurting as well because I had to keep going over it.”

“The things you do for love,” Nock chuckles.

Tattooing has taken them all over the world, from the foothills of the Himalayas to private parties hosted by Miley Cyrus.

Cyrus is a big fan of Winzer’s work and the pop star periodically flies the couple to America for parties she’s hosting. “Lauren’s done Miley a few times, Chris Hemsworth – a lot of people in Miley’s circle,” he adds.

“People come to me for really tacky, girly stuff,” says Winzer. “My stuff is feminine, I use a lot of glitter and fine lines.” Some of Winzer’s work is deceptively simple “but those simple lines take the longest to get right,” she says.

Nock describes his work as neo-traditional, “It’s really colourful.” His designs draw on the traditional tattoo style’s bold black lines and colour palette but differ in their subject matter.

“Heath will do something that seems normal, like an eagle, but Heath’s eagle will be a little weird. He brings something extra,” Winzer says.

“It’s a really slow process,” he says. “Apprenticeships are hard to get. I started getting tattoos all the time just to get to spend time with the artists.”

In 2011, at age 25, he opened his own shop. “I opened Hunter and Fox because I had a different opinion about how a shop should be run – I think the artist should be before the shop, but not everyone feels that way,” he says.

Since taking over the Alexandria shop front, Hunter and Fox has expanded to two levels and “business is nuts, non-stop.”

Eleven artists work across the two floors. Nock and Winzer are booked out months in advance. They both love the parlour, but hope to one day downsize. “It’s great running such a big place, but it’s pretty hectic,” Nock says.

“Yeah, I love what I do,” says Winzer, “but one day I want to be able to paint way more than I do now and only tattoo when I feel like it.” She’s currently working on a floor-to-ceiling mural for Daisy’s Milkbar.

When they aren’t in the studio, Nock rides his Harley around the city, they hang out with their dogs and they both paint. Their paintings leave the house almost as soon as they’re done and wind up hanging on friends’ walls or at the shop. Their home in Haberfield is full of large surfaces for them to work at and the house is littered with brushes and paint. It overlooks a giant backyard where their three dogs, Biggie, Luna and Fang, spend most of their time.

Their friends’ artworks hang on almost every available wall and they keep their house low-key and comfortable. “It’s never going to be flash,” says Nock, “but it feels like a home.”

For the most part he’s right, it’s full of comfy couches and crowded bookshelves. But Winzer’s bedroom-sized wardrobe sounds out. Her clothing racks are stuffed with an eclectic array of bathrobes, colour and moody vintage. The room sums up her style: she’s mounted a neon sign that reads “Paradise” in pink lettering next to a full-sized pink-and-gold throne. 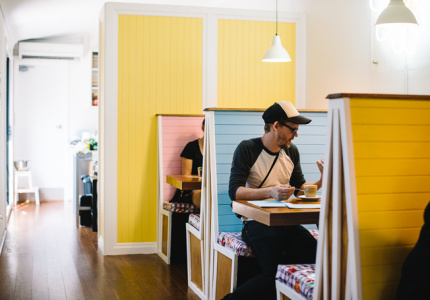 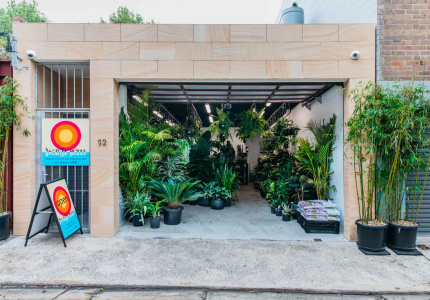