We visited the renovated church holiday home of candle entrepreneur Elise Pioch Chappell and her bicycle-inventing, industrial designer husband Pablo, and were captivated by them both. On arriving at Pablo Chappell and Elise Pioch Chappell’s Lower Portland home – a renovated 19th century chapel set among rolling hills an hour out of Sydney – we’re greeted by Jackie, an enthusiastic Jack Russell whose sole occupation is to yap at everyone’s heels. Assuming she is part of the greater Chappell clan, which includes a posse of plump chickens and the occasional visiting kangaroo or iguana, it’s only later that it becomes clear that she is in fact the neighbour’s dog. That’s the environment that Elise (creator of Maison Balzac candles) and Pablo (an industrial designer and bicycle magnate behind Chappelli Cycles) have created – a place that everyone, invited or not, wants to be a part of.

When the couple first laid eyes on the church that is now their home, it wasn’t exactly calling out for a congregation. Largely dilapidated and filled to the brim with debris, they spent three years excavating and restoring it to its original charm, as well as adding dashes of their own. The project is still ongoing; they only recently added and completed a mezzanine level nestled under the church’s steeple that now serves as their master bedroom.

At nine months pregnant, Elise diligently hammered every nail in the timber floorboards of their bedroom, which her husband lovingly built. It is this exact trait that she applied when starting Maison Balzac. While still head buyer for Belinda and The Corner Shop stores, a more than fulltime job that required trips to Europe four times a year, she would spend each night researching candle making on the internet at home. After her self-taught, two-year course of study, she went about making her first batch of votives in each room of the church (where else?). “Wax is so moody” she proclaims, explaining how precise the science is to create each batch of candles, to ensure each is consistent. It’s a process that requires rigorous control over the temperatures of her apparatuses and surroundings, and the meticulously chronicling of them in her notebook.

Pablo also has a practical nature and a love of the hands-on, a quality that led him to industrial design. As a young boy growing up in Kent, Pablo’s entrepreneurial father – who helped bring Toyota to England in the 1980s – would spend his spare time restoring vintage cars and encouraged Pablo to tinker away too. At 17, he built an electric go-cart for a school project that impressed his headmaster sp much that it was immediately tested out on the school field (he got an A-plus). At university, his final design project had him featured on the front page in the national newspaper for his solar-powered Vespa (he still has the prototype).

After working in the close-knit design team at Dyson for five years, as well as adding Breville to his résumé, it was time for Pablo to start something of his own. He decided that he wanted to make “sexy” bikes to sell “really cheaply”, and Chappelli Cycles was born. Originally selling his fixed-gear, single-speed, three and eight-speed bikes through his internet site, the company opened its first showroom in Sydney’s design hub of Redfern last year and its warehouse headquarters are being built in Botany as we speak.

Elise finds constant inspiration in the natural environment that envelops their lives. “As you can see, I have a passion for anything nature-related…picking fresh thyme in my garden, or holding my chickens.” Similarly, it was the smells of growing up in Beziers, France that inspired her first line of candles for Maison Balzac. “To create the five fragrances I…remembered a typical Sunday at home in the South of France when I was little,” she says. Le Soleil has notes of citrus to resemble the orange blossom water she would drink on waking. La Rose is inspired by the Victorian roses in her grandmother’s garden. Le Sud is the bath her grandmother would prepare for her, infused with fresh lavender. L’Eglise incorporates the smells of the stone church they would visit to burn a candle in prayer. And Le Bois evokes the scent of the Mediterranean shrubs as they would walk through the bush after a big feast at lunch. Just like Chappelli, the Maison Balzac story told by each candle has strong essences of family.

There is a seamlessness in both Elise and Pablo’s life and work that conveys that their vocations stem from their passions: the splash of fluorescent colour on Maison Balzac’s otherwise monochrome packaging was inspired by one of Elise’s favourite Christopher Kane fashion collections, which extends to the bright pink chair conspicuously sitting at their dinner table next to its more staid wooden counterparts. And just as Pablo saw the potential of the chapel’s “great bones” on his first viewing, he has similarly kept the original trademarks of the petrol station that is now Chappelli’s showroom, and the wrought iron factory that is now its headquarters. Yet despite both having achieved considerable success in both their careers (Chappelli’s ¬NuVinci bicycle was runner-up overall in the Australian Design Awards for 2012, while Maison Balzac has been picked up by uber-hip Parisian boutique Collette), one can tell that their proudest creative achievement to date will be the arrival of their first daughter LouLou.

To view the latest Chappelli Cycle range and shop online, head to chappelli.com.au and to view the Maison Balzac scented candle range and purchase, peruse maisonbalzac.com. 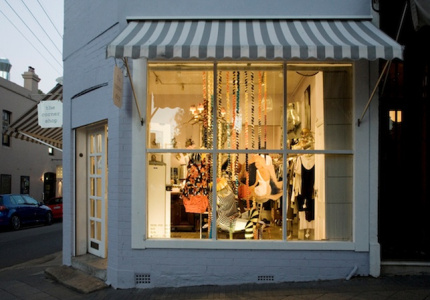