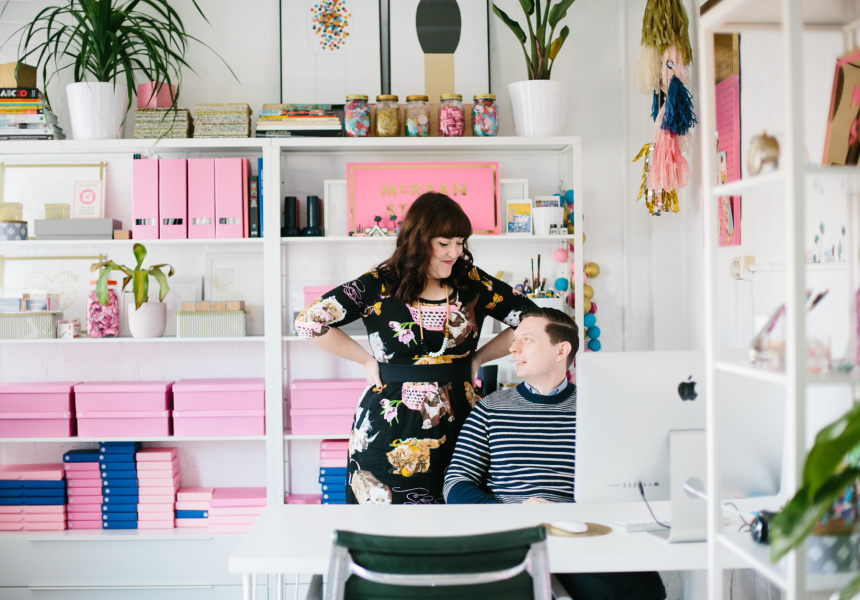 While many fledgling businesses dream big, Joshua and Megan McKean are thinking small. The husband-and-wife duo is behind McKean Studio, a collaboration bringing together their individual skills in design to produce a line of miniature creations inspired by their travels.

McKean Studio’s signature products are the Mini Cities – tiny, gorgeously bright replicas of famous cities around the world, including Sydney, New York and Palm Springs. Continuing on the miniature theme, McKean Studio also creates intricately detailed foil prints, scarves and bangles – each item reflecting their favourite travel destinations. In fact, it was on their honeymoon in 2011 that the idea for McKean Studio came to life.

“We did a round-the-world honeymoon the month after we got married. That was the first time we travelled together and the first time I’d been overseas at all. So it was definitely like a big inspiration,” says Megan. “It was just going to be like a little hobby project, where I’d just do some stuff based on what we’d seen, and then it boomed a little bit.”

Both McKeans studied design, but each brings an entirely different skill-set to the table. Joshua studied industrial design and loves product conception, while Megan studied visual communication and is responsible for the artistic side of the business. Despite their shared backgrounds in design, they actually met outside the industry. Megan grew up in the Hunter Valley, and Joshua spent his life moving from rural NSW towns Tamworth and Berry, to Vanuatu. It wasn’t until they both moved to Sydney that they met in oddly coincidental circumstances.

“My neighbour was going to a wedding so I went with him, and then met Josh at the wedding. Then Josh came back to the apartment block and we sort of got chatting, and it turned out Josh used to live in my apartment in my bedroom a couple of years before me,” says Megan.

They’ve now been together for six years, and have worked on McKean Studio for around three. When the business first started, products were made on their dining-room table, but they’ve since been able to move their work into a small studio in St Peters’ new creative hub, Precinct 75 (the precinct is also home to Maniax, a space for axe-throwing and design company Design Twins.

“We’d have our printer on the fridge, and you’d be working at the table, and you’d be doing emails in bed and stuff like that. So it’s definitely good – just for our mental health – to have a different space. You shut the door at the end of the day and that’s like work done,” says Megan. “Except for the emails.”

In keeping with their love of miniature, their small working space is ideal – and in close proximity to like-minded creatives.

“It’s a good size for us,” says Josh. “It’s the smallest space in the whole complex, so that’s our little badge of honour. It’s nice and light, which is good, and it has a really good energy. Everyone we’ve met so far is very friendly.”

They also live in St Peters, and have come to love its growing variety of shops (“We’ve got a cafe and a bakery now!” says Megan), as well as how close it is to the airport, the gateway to endless design inspiration.

“I think travel’s a good thing to refresh your mind,” says Josh. “You kind of get stuck doing the same thing all the time and it’s a clean slate of, like, ‘Oh, life’s bigger than this suburb.’”

And with a whirlwind trip to Europe planned for October to visit Iceland, Paris, London and a few other cities, we’ll no doubt see their travels materialise in miniature form in the not-so-distant future.