A City Landmark Dances, Entrances and Is Transformed 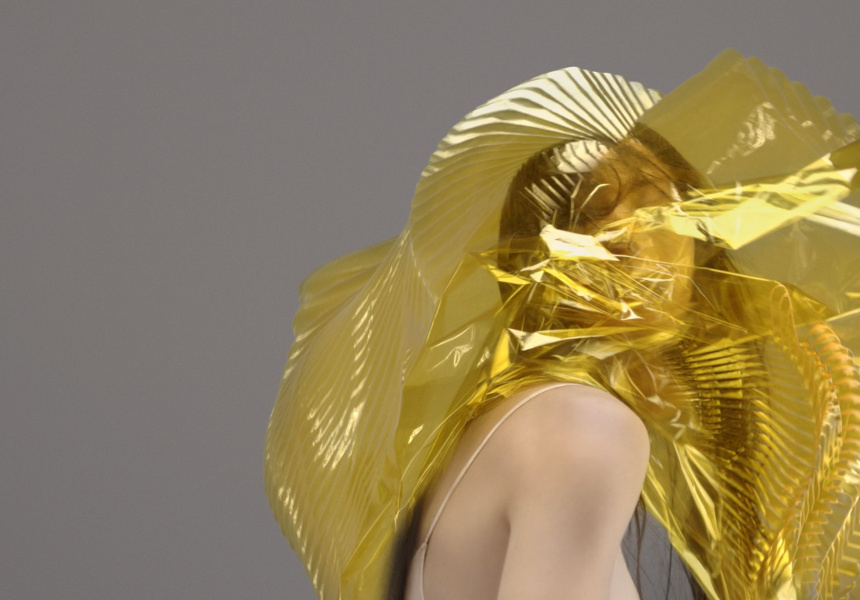 At any time of day from now until July 29 you'll see in the windows of Myer on Market Street a subtle adaptation evocative of a 60-metre installation being held at Melbourne's Myer.

Dutchman Bart Hess is the artwork’s creator, part of a collaboration with skincare brand Aesop, which commissioned the acclaimed conceptual artist to create seven short films that express the skin “as an aggregator of senses”.

“This work is an exploration of the body and represents the constantly evolving relationship materials have upon our skin … The goal is that you can feel the material on your skin” as you watch, says Hess, who was in Melbourne last week for the launch. “How can I create an emotion on-screen? And how as a viewer will you feel it?”

Each film in Epistēmē, an ancient Greek word for knowledge and understanding, speaks to the skin’s response to different Aesop products, such as fragrances and hair care. (Aesop has enlisted globally renowned artists and even choreographers for several years now to create an annual ephemeral work for the street frontage).

In one window in Melbounre, a woman with dead-straight brown hair dressed in a white singlet pulls a translucent, deep-yellow cowl over her head. It looks like plastic but moves like something organic. In another film, two men – naked but for briefs – move rhythmically in and around each other, covered in virtual scales. “I like this composition of forms,” Hess says, standing in front of the latter. “You don’t know if they’re standing or floating.”

Hess points to the movement of each figure behind the glass. They’re twisting and dancing, swimming and coiling.

“They appear fluid and effortless, capturing the status of a material passing over a body, capturing the change of shadow and light,” he says. Look closer, and you’ll notice “the layer and digital effects of virtual materials”.

This is Hess’s vocation: manipulating real-world materials – he uses a lot of PVC sheeting and latex – with digital tools to blur the line, visually, between the virtual and reality.

“How can I manipulate a material so it’s only visible in film?” he says. “The digital craft can create something that is non-existent … I always try and get the viewer to ask, Is this analogue or digital – is this real? You will see the history and future of material in that film.”

In 2013 Hess told Dazed magazine that he massages materials to the point of being grotesque. It was roughly two years after he’d encased Lady Gaga in slime for her Born This Way video clip.

“My practice is constantly evolving. I still try and push materials to the limit, however not always to the point of being grotesque,” he says. “I enjoy finding the balance between what is considered beautiful and ugly.”

Lady Gaga is just one high-profile Hess collaborator. He’s worked with a plethora of other world famous and pioneering artists, including fashion designer Iris Van Herpen and photographer Nick Knight. Fashion is a natural ally for Hess, whose multidisciplinary work worships materiality and uses the human body as a vehicle for technology. His pieces, whether photographic, filmic or performative, are highly tactile with a slick cosmic aesthetic.

“It is futuristic without showing the obvious,” he says. “Much of the time, the future is imagined or visualised as something clean and cold. [But] for me, material and tactility” better explains time and technological advances still to come.

Hess works from a warehouse studio in Eindhoven, a small city in the south of the Netherlands. Every six months the space transforms completely with each artistic project. During the production of Epistēmē, it was a film set. Now, it’s an atelier – Hess recently designed costumes for a ballet, Sleeping Beauty Dreams, in Miami.

“On my return we’ll change it so it’s something else again,” he says.

“As a human, you are able to sense the changes in another person, and you easily can imagine the physical sensation experienced by someone else when only looking at a screen,” Hess says. “Hopefully the viewer of the windows is transported, and able to superimpose themselves onto the bodies seen in the films.