Carving a Niche Out of Resin at Dinosaur Designs

Dinosaur Designs’ salad bowl and servers can be seen on many a dining table across the country, a chunky bracelet on many a wrist. We chat to co-founder Louise Olsen about the brand that has become a colourful Australian icon, both here and overseas. 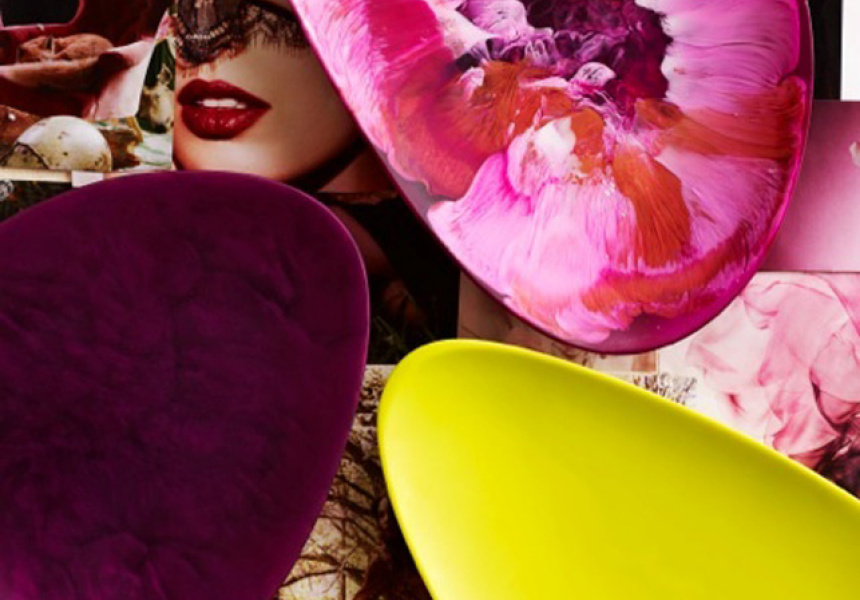 Growing up as the daughter of world-famous Australian artist John Olsen may have intimidated some creatively, but Louise Olsen, co-founder of Sydney-based Dinosaur Designs, has certainly found her own niche – a niche that just happens to be carved out of resin. Twenty-seven years since its inception, the brand has grown to become one of Australia’s most recognisable and beloved design houses.

Olsen met her business (and life) partner Stephen Ormandy while majoring in drawing and dabbling in art history at Sydney’s College of Fine Arts (COFA) in Paddington, but they both “figured out pretty quickly that there weren’t many jobs out there for people who had majored in drawing, and so we started making things to sell at the Paddington markets.” Fimo was their first material of choice, but “after coming to work with such stiff fingers from working with the stuff, a friend of ours introduced us to resin,” says Olsen. The duo’s style quickly evolved from there.

Chunky bracelets and cuffs, rings and heavy bold necklaces in vibrant hues turned out to be the key to their success and the team opened their first shop in the Strand Arcade on Sydney’s Pitt Street in 1989, after only four years in the business, soon progressing into homewares.

Despite overseeing seven stores in Sydney, Melbourne, a recent addition in Brisbane and New York, plus a raft of international stockists, Olsen and Ormandy both work full-time designing in their Redfern studio and their dedication and love of their product is palpable. “Being mindful of what we’re creating has always been really important to us,” says Olson. “That’s been one of the reasons that we’ve stayed in Australia to make all of our pieces. We want to see the process all the way through.”

This attention and respect toward their surroundings shines through their designs. Olsen “can’t help but be influenced” by where they live in Bronte. “The light, the colour, the people, the music, everything infuses into us. We notice that when we’re in New York just how truly Australian we are.”

Collections in the past have been inspired by the wealth of Australian coral, the bright patterned feathers of wild birds and stones buffed smooth by waves. This country is written all over their designs. But this isn’t cringe-worthy Australiana; the Australian presence is much more subtle, but it’s there.

Making it in New York is no small feat. After the late Italian style icon Anna Piaggi bought a pair of flamboyant shoulder-length earrings from the Paddington store in the early 90s – which were subsequently shot for Italian Vogue – the first rumble of a snowball effect rippled through the company, which would grow to see Dinosaur collaborate with some major players, including Louis Vuitton and Paul Smith. More recently, renowned costume designer Kym Barrett commissioned a custom collection to be featured in The Met Opera’s production of The Tempest in New York later this year.

A knack for knowing what drives a Dinosaur Designs customer is something that is close to Olsen’s heart. “A Dinosaur Designs woman is quite liberated in how they feel and think about fashion,” she says. “They’re not bound by a conventional sense of what is precious and they have a certain understanding of design and colour.”

When considering the recent release of their current collection Sorbet – an assortment of pastel-toned designs evocative of the colours that adorn the ice cream cones of Italy – not to mention talk of a soon-to-be realised foray into furniture design, it’s clear that Olsen and Ormandy aren’t planning on slowing down any time soon. In fact the team might just be more dynamic than ever.

Dinosaur Designs are having their annual sale this weekend Friday to Sunday, with up to 80 per cent off selected resin and silver jewellery, homewares and glassware.