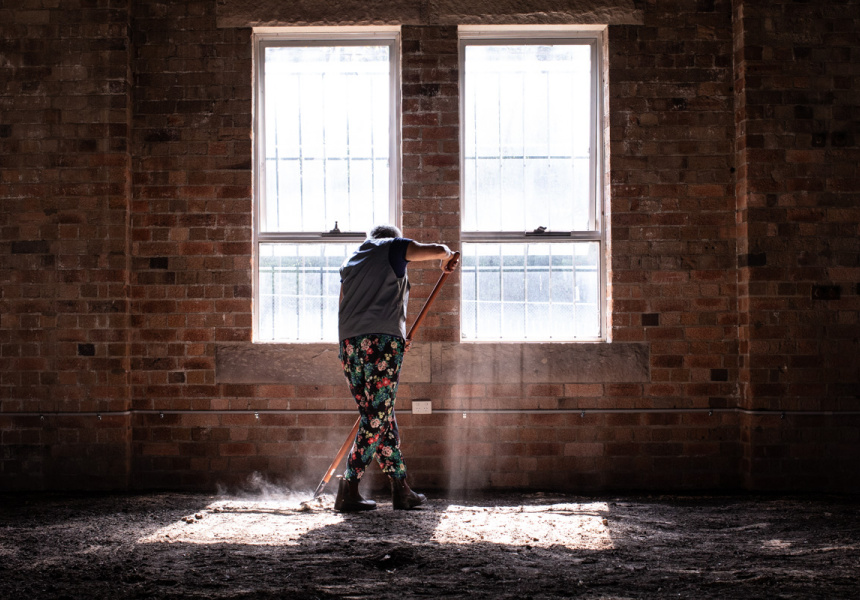 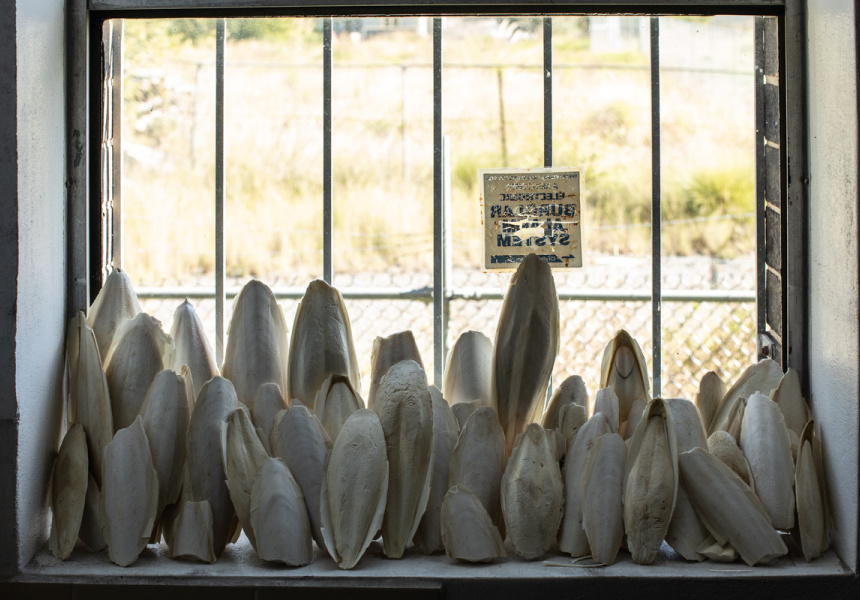 The first thing that greets you is the smell: a warm, rich, comforting, earthy scent. Little wonder – the Clothing Store at Carriageworks has been filled with 300 tonnes of bespoke soil, which visitors are encouraged to rake, dampen, fertilise, tread through and ultimately take home.

It’s all part of Absorption, the latest installation from Sydney-based organisation Kaldor Public Art Projects, which has been creating ground-breaking installations with international artists in public spaces in Australia since 1969.

For this – the 34th project – ardent art collector, philanthropist and founder of Kaldor Public Art Projects John Kaldor has invited New York installation artist Asad Raza to take over the Clothing Store, which was built in 1913 and is part of the historic Eveleigh Railway Workshops. Raza, in turn, has collaborated with seven local artists, including Khaled Sabsabi, Agatha Gothe-Snape and Daniel Boyd.

Together, the group has worked closely with a team of scientists from the University of Sydney Institute of Agriculture, led by soil scientist Professor Alex McBratney, to create the interactive installation.

Raza is an artist of American and Pakistani background, and his exhibitions often invite viewers to become part of the artwork. Previous installations have seen him transform a 16th-century deconsecrated church in Milan (replete with precious sculptures and frescoes) into a clay tennis court where visitors were encouraged to pick up a racquet and have a bash with a young Milanese opponent; while Root sequence. Mother tongue was a forest of 26 living trees installed at the 2017 Whitney Biennial, which viewers were encouraged to take home.

For his first artwork in Australia, Raza and various biologists and scientists have mixed soil with coffee grounds, sand, silt, clay, cuttlebones and phosphates, creating a “neo soil” that is constantly changing. The exhibition is overseen by 10 “cultivators” – a group of university students, artists and community gardeners – who will guide viewers through the 60-by-20-metre work, inviting them to help tend and test the soil, even listen to it.

Absorption considers the environment, art, decay and renewal, and Kaldor describes the work as a “very appropriate” project to be presented for the 50th anniversary of the organisation. (For its first remarkable project in 1969, Kaldor worked with famous European duo Christo and Jeanne-Claude to create Wrapped Coast – One Million Square Feet, the largest single artwork that had ever been made. It too explored the theme of environment.)

“Asad has done a remarkable project I feel is very much of the time – enlisting the help of science, it draws our attention to environmental concerns, bringing together art and science,” says Kaldor. “One of the most important aspects is that Asad has opened his concept to seven Australian artists who have become an integral part.”

For Raza, one of the most gratifying aspects of the project has been collaborating with and learning from people like Professor McBratney and the seven artists who were chosen following a workshop earlier this year, during which they put forward individual proposals for projects that would dovetail with the overall theme.

The artists’ concepts are as broad as they are diverse. “When I explained to Khaled what I was going to do, without missing a beat he said, ‘I’m going to bury a grid of turf squares underneath the soil and it’s going to be like a hidden reality, a piece that’s about the Sufi concept of the mystery underneath everyday life’ and the hairs on my arms stood up because it was instant, the ideas were just there,” Raza says.

Megan Alice Clune has created a sound installation that is triggered and changes according to the soil’s moisture content; Jana Hawkins-Andersen has created clay and phosphate cuttlefish sculptures that will be broken up and used as fertiliser; while Boyd has designed silicon installations along the window frames, creating a beautiful and atmospheric natural lighting effect.

Inspired by Kaldor’s own history as a fabric-maker, Gothe-Snape has created garments worn by the cultivators, altering ASOS fashion vests with hand-sewn swatches of Kaldor fabrics.

“I often work with found objects or histories and, as someone interested in Kaldor Public Art Projects, I wanted to understand John’s history,” she says. “It took him a lot of convincing because, like many of us, he wants to remain quite separate to his past.”

Ultimately the pair had numerous conversations during which Kaldor shared the art of fabric creation, which has generally been superseded by the sort of cheap, fast fashion sold by ASOS and other major retailers.

Gothe-Snape did a search on Etsy and eBay and over a few months was able to collect about 60 metres of Kaldor fabrics. “I liked ideas about bringing things together that are used to remaining discrete, just [like] the relationship between John’s fabrication company and his current manifestation, the connections between past and present,” she says. “It’s a very gentle work, keeping things separate but allowing things from under the surface to emerge subtly.”

An in-demand artist herself with solo shows coming up in Brisbane and Perth, Gothe-Snape describes collaborating with Raza as captivating.

“We’ve all become absorbed in Asad in a way,” she says. “This work wouldn’t have happened in relation with anyone else. He is a thoughtful, emotional, charismatic person and so much of his work is about his relationships. It’s been thrilling.”

Kaldor Public Art Project 34: Absorption by Asad Raza is presented free at the Clothing Store, Carriageworks from May 3 to 19, including various free public programs.