Tattoos, speedboats and butterflies by night – the harbour-side production of Madama Butterfly is opera, but not as you know it. 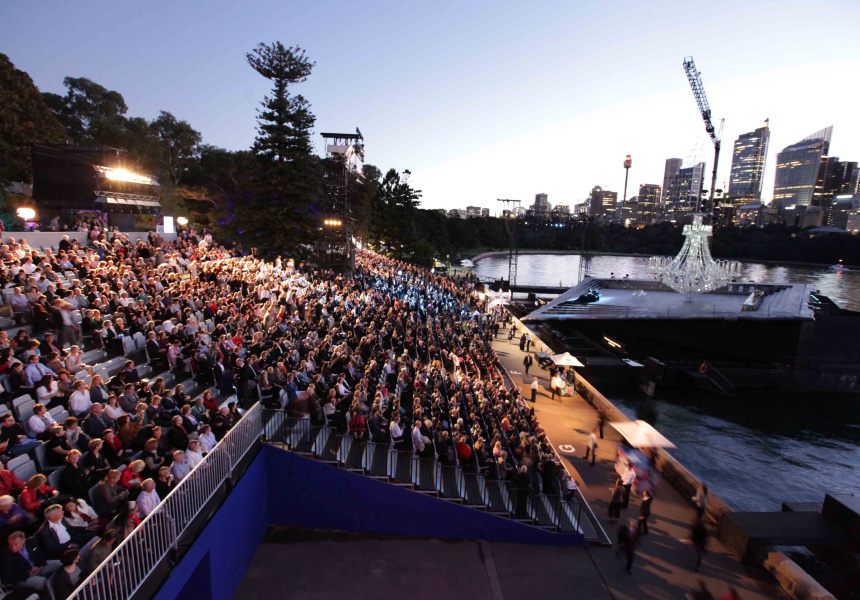 The leading lady has a full-body tattoo, the villain makes a dazzling dash across Sydney Harbour by speedboat and the whole starlit event is accompanied by not one but two bursts of fireworks. The crowds are huge, the champagne is flowing and the buzz in the crowd is palpable. So far, so Sydney. But this is a classical opera staged in the open on a floating stage on Sydney Harbour.

And this opera, Madama Butterfly, is being performed by the country’s flagship company Opera Australia, with its charismatic and endlessly enthusiastic artistic director, Lindon Terracini, at the helm.

For this spectacle, the company’s third waterfront production staged alongside the Royal Botanic Gardens at Farm Cove, OA has teamed up with cutting-edge Spanish company La Fura dels Baus to present Giacomo Puccini’s gut-wrenching story of love, loyalty and betrayal. Sung in Italian with English subtitles, Terracini is adamant this opera has broad appeal.

The inaugural production in 2012, Verdi’s La Traviata, attracted “huge numbers”. The follow-up production in 2013 of Bizet’s Carmen attracted 41,000 people. Almost half the audience had never been to an OA show before, yet many of them were so convinced by what they saw they subsequently bought tickets to the company’s regular season in the Sydney Opera House.

One thing all three productions have had in common is the wow factor. La Traviata boasted a nine-metre-high chandelier encrusted with 10,000 Swarovski crystals, and you could have been in Balmain and still seen the huge, glowing, red-neon bull that proudly dominated the Carmen stage.

And Butterfly promises to be no different. Not only is it the largest floating stage OA has ever used (44 metres wide), but the Astro-turf surface undulates to represent the grass hills of Japan, from which grows a real bamboo forest and behind which a custom-made, 12-metre sun and moon will nightly fill with air, causing them to float on the harbour. Of course there’s the undeniably impressive backdrop: Sydney Opera House and Sydney Harbour Bridge, which obligingly glow and twinkle each night.

If Terracini is making a blatant grab for the populist vote it’s because he insists that’s the market opera was originally intended for. “Opera is an art form that was hijacked for a while by academics and a club who weren’t interested in opening it up to a wider public,” he says, pointing out that composers such as Rossini and Mozart would simply have had their funding pulled if they’d created operas that didn’t hold broad appeal.

“Mr and Mrs Joe Public have embraced OA’s outdoor productions and that’s the best endorsement we could have,” he says recalling the morning after Traviata’s debut when the company sold $200,000-worth of tickets in one day. “It symbolised what every opera could and should do: play to a much wider audience.”

Terracini first suggested the idea of an outdoor opera on Sydney Harbour in 2010 and was met with negativity at every turn: no-one would come; he was dumbing down a refined art form; it was a too-exclusive use of public space; or – the most likely of comments – it would be rained out. “Whenever you want to do something different there’s resistance,” he says. “And then I had to find the money.”

Find it he did, in the form of naming-rights sponsor Haruhisa Handa, the Japanese businessman who has generously sponsored all three outdoor opera events. Ticket prices for the 3,000-seat space start at $75 and peak at $350.

Aside from the visual spectacle, compelling story and – most importantly – the beautiful singing from the 60-strong cast of Australian and international singers, Terracini believes the space itself has a lot to do with its success, with audiences feeling more comfortable outside the Sydney Opera House, where they can sit in the open and enjoy a drink and food during the show. The harbour-front site will be transformed into a Japanese garden, with dining options ranging from a $6 snack from the champagne trolleys to a three-course Japanese dinner.

“The biggest lesson I’ve learned is that there’s a really big audience for opera if you present it in the right way and you’re in a space where people feel comfortable and can connect with it,” Terracini says. “I’ve walked out behind people leaving Traviata who were sobbing into each other’s arms. I will never forget it.”