Interlude is a new art gallery in Glebe, encouraging artists and viewers to interact in new ways. Isabel Rouch met Misael Mercado Dueñas while travelling in Mexico. He was an artist and writer; so was she. After time spent in Guadalajara, the two returned to Sydney and were married. Early this year they opened Interlude, an artist-run space that strives to curate art as an entire experience that goes beyond merely viewing it.

The gallery sits on the corner of Glebe Place. Through its big windows the space looks fresh and minimal, the Interlude sign glowing almost neon white against the black paint.

“The people that visit Glebe are those who visit galleries. It’s like a town in the middle of a city,” says Rouch.

The closure of The Tate Gallery in March has seen Glebe almost devoid of gallery culture. Interlude fills this gap. Just three months old, the gallery already boasts a stable of emerging and established Australian and Mexican artists.

“We want to create an interchange of art and ideas between the two places,” says Mercado Dueñas.

Interlude’s experimental writing program sees artists paired with writers to explore art through literature. This documented almanac of exhibitions and interviews is an integral part of the couple’s philosophy; one that they envision will evolve alongside the gallery.

To “demystify art” is Interlude’s objective. Each show is concluded with a feast; with the artists cooking for the public, so they can interact in a relaxed and open environment.

Mercado Dueñas likens Interlude to a, “Living organism, constantly changing and evolving.” Rather than adopting one exhibition aesthetic, the pair is dedicated to showing an expansive range of experimental practice, with an emphasis on professionally executed shows and published documentation.

Curated alongside collaborator Szymon Dorabialski, Line & Point: Contemporary Drawing Exhibition is a group show featuring six artists that work across drawing. Reflecting the dynamism of drawing as a medium, works are not restricted to the usual format. Rectangular wooden frames have coloured moving forms projected on to them. Examining a range of methodologies and styles, the exhibition is an example of Interlude’s mould-breaking philosophy. 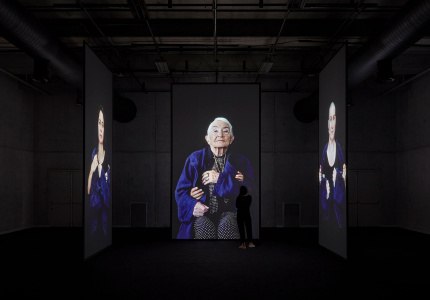 The Best Things To Do In Sydney This Month Under $35