A Book of Moved Objects Perimeter Books’ latest release, Moved Objects charts the collaborative work of Melbourne-based artists Georgia Hutchison and Arini Byng. The limited-edition publication contains a set of subtle and sharp still-life photographs; each showing playfully arranged objects and materials paired against backdrops in carefully cued tones. Moved Objects documents an exhibition of the same name by Byng and Hutchison and will launch at Ariel Books in Sydney this week.

Each image in the series is made up of an assortment of everyday objects, which come together as a sweetly serene marriage of colour and texture. Some objects almost lose their original sense or meaning, as they pose in miniature sculptural arrangements. The faded orange-yellow of a pair of dried chillis becomes stark against a white sphere, a jumble of clear cellophane and a blanched white background. In another frame, scrunched black tissue is wedged between fragments of frosted glass, offset against pale pink.

In addition to Hutchison and Byng’s smooth still-life choreography, Moved Objects also features commentary by Melbourne artist and academic, Lou Hubbard. The book was recently featured as a part of Perimeter’s showcase at the eighth annual New York Art Book Fair in September. Perimeter Books were the only Australian exhibitors at the fair, which parades a wide collection of artists’ books, catalogues, monographs, periodicals and zines from publishers around the world via Printed Matter at MoMA PS1 in Queens. 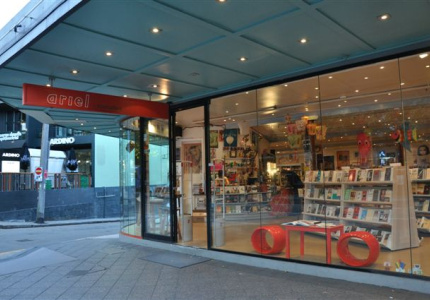