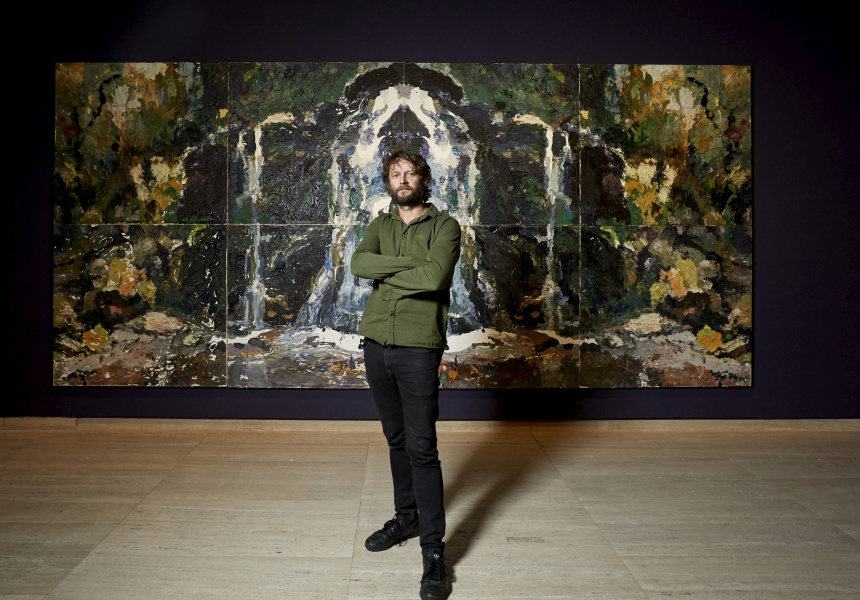 Artist Ben Quilty in the exhibition Quilty at the Art Gallery of New South Wales. 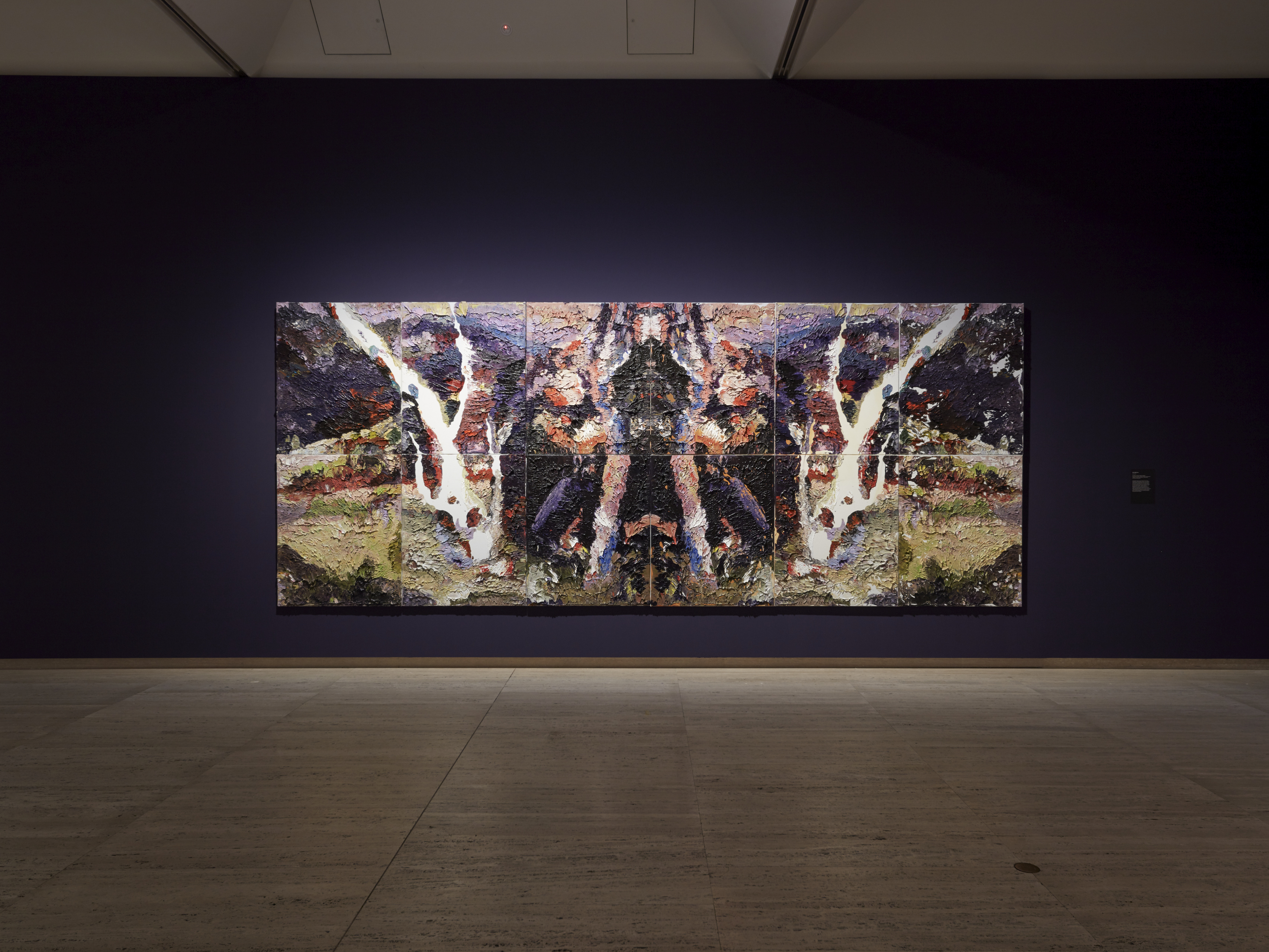 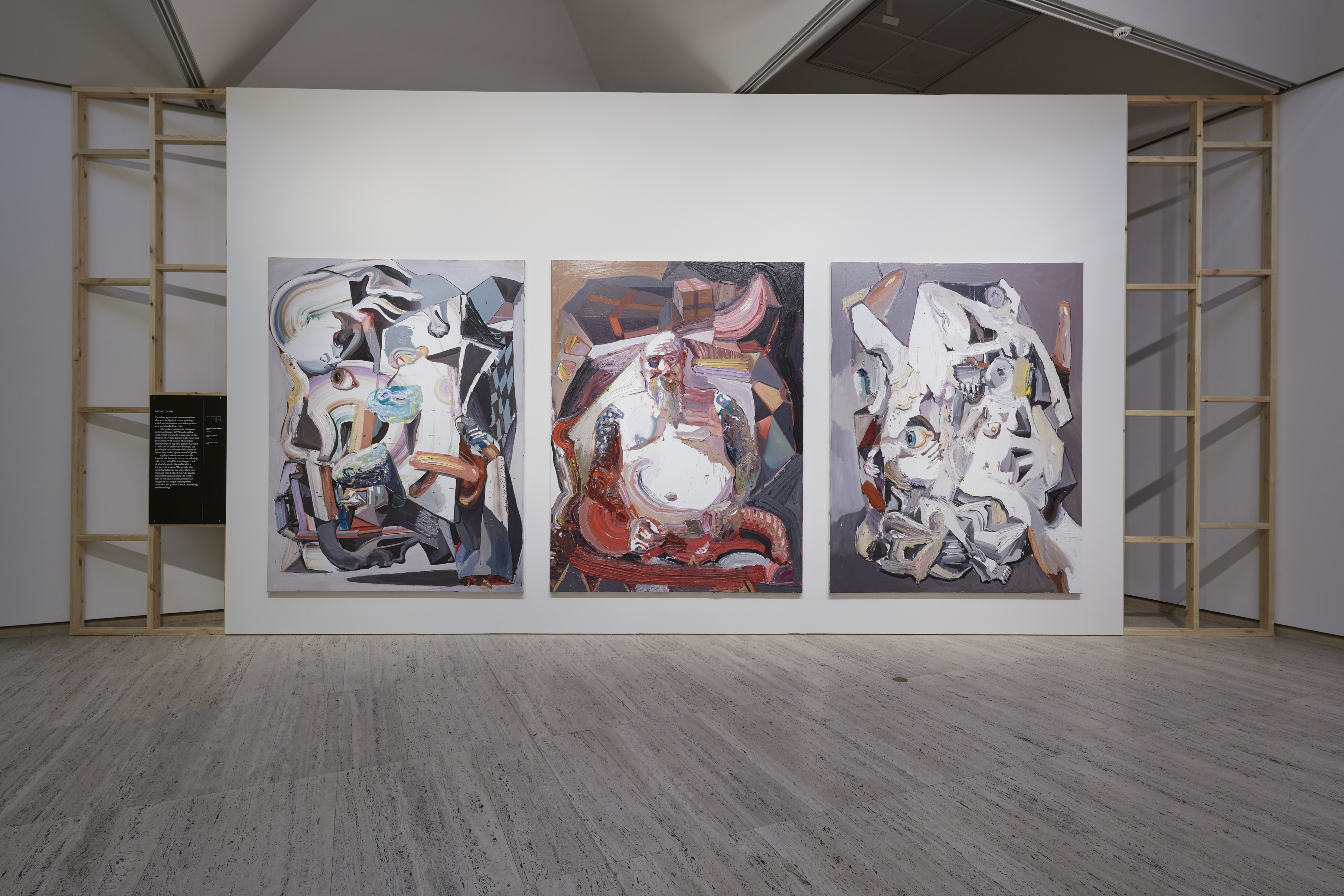 It's a scorching spring day. Ben Quilty is ensconced in the air-conditioned comfort of the Art Gallery of New South Wales, where a major new retrospective of his career is about to open.

“This place is like my church, it’s why I do what I do,” he says. “My studio is my chapel, but I come to the AGNSW to be close to the source and connect with the community.”

When Quilty opens on November 9 the community will have the chance to experience the first major survey in a decade of one of Australia’s most acclaimed contemporary artists. It spans 15 years of of the acclaimed artist’s intimate portraits, nihilistic landscapes, early works about Australian masculinity, and his reflections on social and political injustice.

The breadth and depth of the show is impressive, the more so considering Quilty is just 46 (which is young to be the subject of a significant show in a state institution spanning decades of work). “To walk in here and see the stories they are telling with the work I’ve done is mind-blowing,” says Quilty. “It’s unbelievable to see what two of my heroes have achieved: I feel like I’m in the presence of greatness.”

Those heroes are curators Dr Lisa Slade, assistant director of artistic programs at the Art Gallery of South Australia, where the exhibition first opened, and Justin Paton, head curator of international art at the AGNSW. They have tweaked the show for its Sydney iteration as part of its national tour that included the Queensland Art Gallery & Gallery of Modern Art in Brisbane.

The AGNSW incarnation of the show is particularly meaningful for Quilty; he first exhibited his HSC artwork there at 17 as part of Artexpress in 1991, and also won the gallery’s Archibald Prize with his portrait of Margaret Olley in 2011.

“I made that [Artexpress] painting the night before it was due in and I actually failed art as part of the HSC because I was quite off the rails at that point,” he says, laughing. “It’s only now as an adult I’m coming to understand who I was as a 19-year-old, but I could always draw from when I was pretty young, and that was when I started using drawing as a way to talk about how I felt about the world.”

Today Quilty is an impassioned activist, using his brush to draw our attention to our responsibility as citizens living in an increasingly fragmented world.

“I’ve done bronze sculptures and other things over the years, but I always come back to painting because to wield a stick with bristles stuck into it using a pigment and a surface is the best way I have found to respond to being a human.”

The exhibition charts Quilty’s work in four rooms, beginning with the artist’s early reflections on the initiation rituals performed by young Australian men, then his experience as an official war artist in Afghanistan. It also includes his landscapes and his campaign to save the lives of Bali Nine pair Andrew Chan and Myuran Sukumaran.

Work produced during visits to Lebanon, Lesbos and Serbia with author Richard Flanagan is also featured, along with intimate portraits of the artist, his family and his friends, and Quilty’s recent grotesques made in response to contemporary politics.

A favourite work is Self portrait: the executioner (2015), which was painted the day after the convicted Australian drug smugglers Chan and Sukumaran were executed by firing squad in Indonesia on April 29, 2015. “The colour palette is off the charts, and when people talk about ‘getting into the zone’ I look back at that work and I have no idea how I did that.”

These days Quilty juggles his art making and activism with his responsibilities at the AGNSW, where he is an active board member. When Broadsheet chats to him he has just attended the ground-breaking ceremony for the new $344 million Sydney Modern Project, which on completion will allow the gallery to accommodate more visitors and better show its extensive collection of Indigenous art.

“[This] was momentous for me as we currently have to turn away many school excursions and for many years the Indigenous gallery has been in a transformed basement. To be able to address that is fundamental not only to the gallery but to the whole community because the way to make the community a better place is through the arts,” he says.

Quilty is showing at the Art Gallery of NSW from November 9, 2019 until February 2, 2020. Ben Quilty will be in conversation with ABC Radio presenter Robbie Buck at Art After Hours on Wednesday November 13. Quilty – Painting the Shadows will air on the ABC on Tuesday November 19 at 9.30pm and then on iView.