From Beirut with Love

We chat with Zach Condon of Beirut about the joys of timeless song writing, the song that spawned a Brazilian music festival in his honour and the importance of never being in vogue. 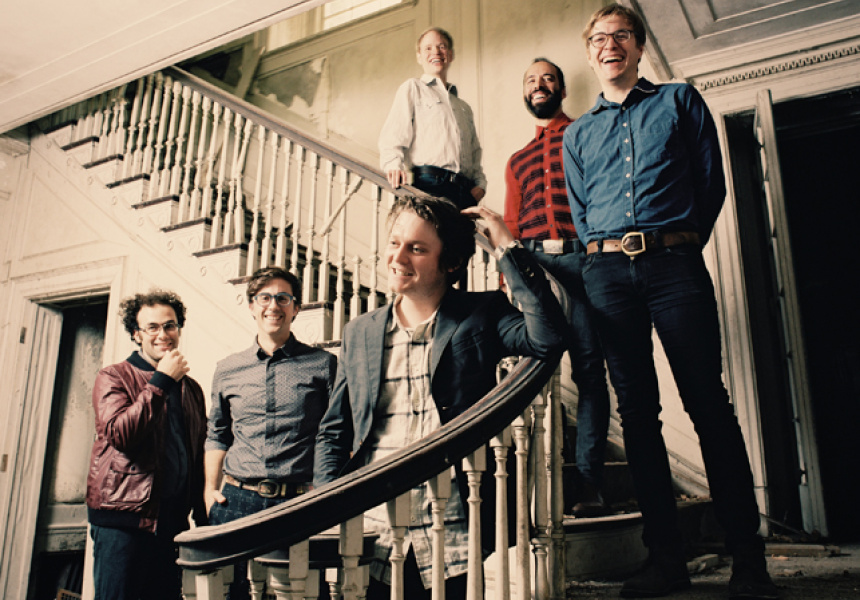 Zach Condon stands on the curb of a busy street in Paris, singing into the end of a French horn, stopping intermittently to glance up at the scattering of onlookers like a naughty schoolboy who’s just discovered the perks of rebellion. A moment later, the camera pans to reveal an accordion with a man attached to it, and together Condon and the accordion player head off down the street playing one of Beirut’s most revered songs. It was Beirut’s episode of A Takeaway Show, the French music documentary series that has featured everyone from Phoenix to Foals and Sigur Ros live on the streets of Paris.

That was 2007, when Condon was spending a lot of time in France trying to build a following. What he didn’t know was that a few continental jumps away in South America, the locals were already falling in love with him and his worldly orchestra. It all started when Elephant Gun (a song from Beirut’s Lon Gisland EP) was featured on a Brazilian television mini series called Capitu and led to a music festival spanning more than 10 cities in Brazil and in Lima, Peru. It was a successful series and Condon’s lyrical engagement with themes of death and growing old resonated with scores of Brazilians who, until the show, were unaware of the American’s music.

A few years later, on August 30, 2009, two young girls from the countryside outside Sao Paolo would organise a day of celebration in which fans of Beirut could form bands and stroll – much like Condon did that day in Paris – through the streets of Rio and Salvador, playing their own eccentric interpretations of Beirut songs. The name was a Portuguese derivative of Condon’s Beirut (Beirutando), but it wasn’t until the final hour that he’d even hear of its existence.

“I’ve lived in Paris and I’ve lived in New York, so I’ve spent all of my time concentrating on those two places,” Condon says. “But all of a sudden I get this phone call from Brazil, which is the most surreal conversation I’ve ever had, saying there is a day-long festival in Sao Paolo and Rio and Salvador and ‘you need to come here, you need to come to Brazil right now’.

“They must have watched the Takeaway shows because they were literally walking down the street busking,” Condon continues. “At least that’s what I imagine they saw.”

Born in Albuquerque, New Mexico, Condon moved to Santa Fe with his parents when in high school. He never really liked the traditional learning environment and was only ever classically trained in the trumpet. Aside from being proficient at more than eight instruments, Condon is best known for creating timeless music, the kind that you can’t really put into a genre. It’s not particularly cool, nor is the instrumentation and production particularly current. There are no booming electronic kick drums or delayed synthesisers; everything is very acoustic and collaborative and nothing is overstated.

Condon says it was his rebellion against traditional learning that led him to where he is today. “I’ve told myself it’s better to not know what you’re doing because it always seems new, and when it’s new, it’s exciting. Songs can be written on basic principles that you wouldn’t know if you had lessons,” he says.

Beirut released their fourth studio album this year on Condon’s own label, Pompeii Records. The band’s international following has grown with each release, starting with his shows in Paris, spreading across Europe to South America. When asked what the appeal is, Condon responds: “I feel like if I say anything about it I’m just going to sound cocky or something, but I really enjoy the fact that I make very honest music.

“Since I was a teenager, everything I’ve written musically has been incredibly honest. Musically, melodically, harmonically, you name it. There is no posturing at all and I would hope that’s what gets people. The word I want to use, which I hate, is timeless. The music I want to make and the music I really gravitate towards all has that timeless aspect.”

Perhaps the best judge of timelessness is diversity of audience. You need fans from different cultural and political and musical backgrounds to unite under a common tune. Condon is most surprised by his sold-out theatre shows in Moscow and Istanbul, and admits that while he often wakes up in a hotel thinking, “Where the fuck am I?” it’s nice to have fans all over the world. Funnily enough, Condon explains that he has no greater ties to anywhere than Australia.

“I’ve spent more time in Australia than in most European countries. My answering machine, which thankfully you didn’t get, is actually from my good friend Ross in Melbourne. He taught me how to say Melbourne, not Mel-borne,” Condon says, in a relatively impressive Australian accent.

Beirut are playing at this years Falls Music and Arts Festival, over New Years Eve in Lorne. They are also playing at The Forum in Melbourne on January 10, and The Sydney Opera House on January 5.