The summer’s most anticipated exhibition features icons of pop and artists that will add new perspective to what you thought you knew about this movement. What is it about pop that draws us in so deep? 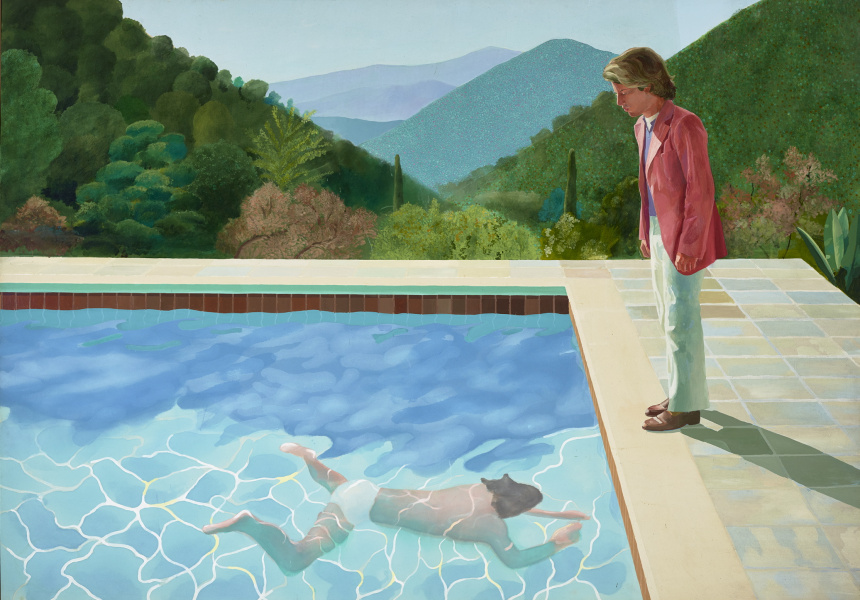 David Hockney, Portrait of an artist, 1972, synthetic polymer paint on canvas, ©David Hockney No 1 US Trust A general view of the Pop to popism exhibition at the Art Gallery of New South Wales featuring Brett Whiteley The American Dream 1968–69.

Brett Whiteley’s 1969 mural, American Dream is made up of 18 panels, each flushed in brazen, electric oranges and reds. Mushroom clouds and turbulent scenes of war spill across birds, body parts and images of New York City, while a red siren whirs around silently at one end. Completed over the course of his yearlong residency at the infamous Chelsea Hotel, the 22-metre-long piece is charged with the energy of its era. Rejected by his American gallery at the time, and rarely displayed since, it has recently arrived in Sydney for the Art Gallery of NSW’s new and expansive pop-art survey, Pop to popism.

“The last time it was shown in Sydney was in 1999,” says the exhibition’s chief curator, Wayne Tunnicliffe. “The title is completely ironic. It’s about [Whiteley’s] disgust and despair with America.” When we meet, Pop to popism is mid-installation and we are sitting among a set of large courier crates, each of them carrying some precious pop-art cargo. This exhibition includes around 200 works from American and European artists, as well as a collection of recognised and lesser-known Australian artists. Taking hold of the contemporary galleries on the lower-ground floor, the exhibition covers a sprawling 1600-square-metres of space.

“In Australia there isn’t a lot of pop art being shown first hand,” says Tunnicliffe. A 1985 survey that appeared at AGNSW and the NGV in Melbourne featured only one female artist, and not a single Australian-made work. “The whole Australian pop story has not really been told. I wanted to revisit this period and to show those works with their international peers.” At Pop to popism, Whiteley is joined by Andy Warhol’s Campbell’s Soup Suite, Roy Lichtenstein’s first comic book painting, Look Mickey, and David Hockney’s Portrait of an Artist. Works by female artists include Barbara Kruger’s Untitled (You Can’t Drag Your Money into the Grave With You) and Rosalyn Drexler’s Race for Time. The Australian pop story is told through pieces by Howard Arkley and still-life works by Martin Sharp and Tim Lewis.

Artworks were sourced from 52 Australian and international lenders through a process that took Tunnicliffe two years. “I travelled quite extensively. You have to go over there and argue your case. We have a long history of international loans, so there are galleries that we have very good relationships with, such as the Tate, who lend generously to us. And you build traction during the process, once you have a few key loans in place.” Pop to popism features works from New York’s MoMA and the National Gallery of Art in Washington.

The exhibition weaves through the development of the artistic movement from the 1950s through to the late 1980s, painting a global perspective. “The language of pop art became international in the mid-to-late '60s,” explains Tunnicliffe. A combination of heightened consumerism after World War Two and the creation of a separate and sophisticated advertising language sparked a global artistic reaction. “Artists around the world begun to question this new visual culture, drawing it in to the previously sacrosanct art gallery. Pop art is saying, ‘hey, let’s look at a soup can’. So you can see how revolutionary that actually was.”

The idea of “popism” looks to a more critical pop perspective that arose during the second wave of the movement. “[Artists] begun to think about how the media constructs your sense of subjectivity, and your sense of self,” says Tunnicliffe. “Artists like Richard Prince and Barbara Kruger took on the language of advertising and turned it around in quite a critical way.”

As for pop art’s lasting appeal and undeniable popularity – both in Australia and overseas – Tunnicliffe attributes this to its accessibility. “It uses a language of everyday life, so people feel an immediate connection with it. They can read it and have something, like, ‘That’s a Campbell’s soup can’, but then there’s something more underneath it. Pop art has become popular culture itself. Pop artists made amazing images, and they’re so recognisable. They are iconic.”

Extended opening hours
Pop to popism is open until 9pm from Thursday to Saturday in January (excluding Jan 29).