He took an unusual approach to cracking New York’s art scene, but it seems to have paid off – recently collaborating with Nike and Adidas. You’ll find his work hanging alongside Hirst, Banksy and KAWS. The LA-based artist is returning for Sydney’s Semi Permanent. Nick Thomm took an unusual route to becoming a “proper artist”. He cut his teeth as a graphic designer, co-founded studio The Drop and start-up fashion mag SRC783 before throwing it all in to focus on his art full-time. “It’s something I’ve always done in the background,” says Thomm. “I never really considered it as a career path [before].”

The Melburnian says he became more confident in refining his style over time. “Some of the more minimal design traits I’d picked up from being a graphic designer started to come into my work. That’s when I began the process of refining and going into more abstract styles.”

Key elements for Thomm are the street-style mix of high and low culture and the aesthetics of the internet. Think Damien Hirst’s butterflies and skulls together with the hyper-coloured painting effects and Greco-Roman imagery shared by post-internet kids on Tumblr.

Thomm moved to New York in 2014. He had a studio in the same building as fellow Aussie-expat artist Ian Strange, who Thomm says mentored him. “He was also in that [Melbourne] street-art scene but kind of broke out of it. And he’s probably one of the few artists who really got his practice to that level of international success.”

In New York, he decided he “would do a series of shows and … put them on [by himself]”. In the lead up to these DIY shows, he promoted them on Instagram. Together with his wife-turned-studio-manager Jay Ramsay, the combination of social media promotion and DIY shows became a method the couple used to build Thomm’s reputation as an artist.

“We basically just rented the space and ran the whole show ourselves. We used that formula for the following four or five years, working our way into [the scene].”

It worked. Thomm received enquiries about purchasing his works through his Instagram account. “We got a lot of DM requests and pretty much emailed out the catalogue and did sales that way.” Even Miley Cyrus approached him through Instagram, which led to Thomm creating a wall mural in her home.

These days, Thomm collaborates with international brands such as Nike, Adidas and Maybelline, designing digital colourscapes that are projected onto busy thoroughfares like Oxford Street in London. He also creates paintings for museums such as the Moco Museum in Barcelona, where his work is exhibited alongside many of his idols – Hirst, Takashi Murakami, Banksy, KAWS and Yayoi Kusama. It’s a “full circle moment”, he says.

Social media continues to be one of the primary ways the artist connects with his audience. It’s usually behind-the-scenes video clips and reels, and Thomm is often captured pouring glossy liquid resins over intense colour combinations, then firing up the blowtorch to give it a slick, glassy effect.

Each Aussie summer, Thomm makes the trip back “home” to spend time with his family and work in his second studio in Fitzroy. “I look at that as a time to set up my year and experiment with new ideas for new projects, because the second half of the year always gets pretty chaotic.

“It’s definitely a nice place to go back to and have a reset … like a working holiday.”

Thomm, now based in Los Angeles, is returning to Australia this month for Sydney’s Semi Permanent. He’ll be talking about his career trajectory to date as part of a panel discussion.

“I think my career path will hopefully show that it’s possible to get there yourself, and to have control over your trajectory along the way,” he says.

Semi Permanent runs from May 25–27 at Carriageworks, Sydney. Tickets are on sale now. 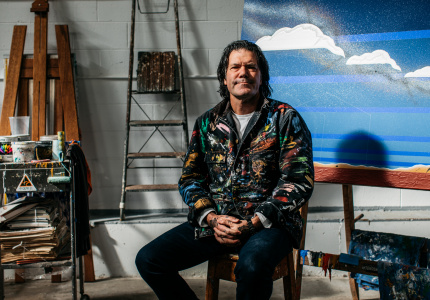