A light and sound festival in an old power station, an art fair takes over a luxe city hotel (including its gym) and White Rabbit Gallery turns 10. 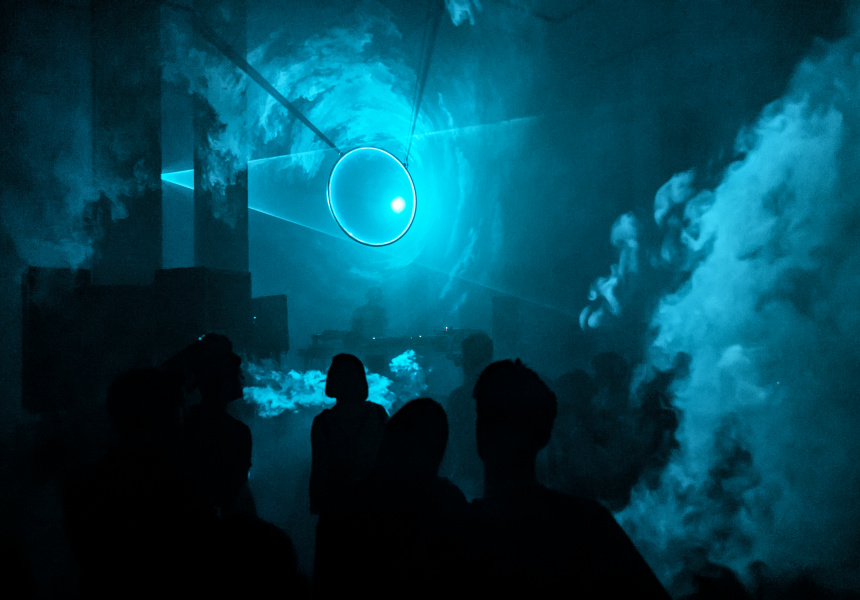 Sydney Fringe Festival
After kicking off the party with a massive music pub crawl last weekend, Sydney Fringe is celebrating its 10th anniversary with its widest-reaching program yet. Head to Kensington Street on September 14 for a sensory experience in the ancient city of Babylon reimagined through live performance, projections and soundscapes. TranSTURM – LICHT_redux will illuminate The Rocks (Thursday 5 to Sunday 8, 11am to 8pm) with animation, light and film, and Yoke magazine has teamed up with Artereal Gallery to host a pop-up exhibition at 17 Oxford Street, Paddington (September 10 to 22), with a supper series with guests such as performance artist Liam Benson. Plus about 340 more things.

Sydney Fringe Festival is on at various venues across Sydney until September 30, 2019. More information here.

Sydney Contemporary
Each year Sydney Contemporary gets bigger and better. The commercial booths (more than 90 this year) are the major drawcards for collectors, but the stellar line-up of performances, talks and installations means you don’t need stacks in the bank to get the most out of this art fair. Don’t miss the conversation with founding member of New York feminist activist collective Guerrilla Girls, Gerda Taro. And you can climb to the top of a six-metre-high neo medieval phone-charging tower to view the fair from above. For budding collectors head to NEXT, where you’ll be able to snap up a piece by an emerging artist for under $5000. Out-of-towners should book a stay in one of the four local artist-designed suites at Sofitel Darling Harbour.

Sydney Contemporary is on at Carriageworks from September 12 to 15, 2019. More information here.

Spring1883
For an eclectic alternative to the white walls of a gallery, head to the Establishment Hotel in the CBD. The entire luxe hotel has been booked out for four days so 26 leading contemporary galleries from Australia, New Zealand and the US can show contemporary art in unexpected ways. This innovative take on an art fair is a great place to nab a piece from some art-world up-and-comers. There’s even an exhibition in the gym.

Making Art Public: 50 Years of Kaldor Public Art Projects
Remember that 300-tonne installation of soil that filled the Carriageworks Clothing Store in May? The Sydney philanthropist and art patron behind it was John Kaldor; the same person who commissioned two international artists in 1969 to cloak two and a half kilometres of coastline in white fabric – the first public installation of its kind of Australia. This retrospective exhibition, put together by British artist Michael Landy, celebrates 50 years and more than 30 ambitious contemporary public art projects produced by this visionary organisation.

Then
White Rabbit Gallery is turning 10 and winding back the clock to revisit its early years and the shows that cemented the Chippendale gallery as a leading institution for the exhibition of contemporary Chinese art in Australia and the world. Experience more than 60 works created in response to a rapidly changing culture, be it an enormous pair of pink fiberglass underpants, flesh-coloured creatures that open to reveal the make-up of the cosmetics industry, a theatrette screening Chinese video art, or some never before seen treasures from the collection of the gallery’s creator, Judith Neilson.

Then is on at White Rabbit Gallery from September 11 until January 26, 2020. More information here.

Soft Centre
For a multi-sensory festival experience like no other in Sydney make the journey to Casula Powerhouse Arts Centre (CPA) for a day bathed in darkness, experimental sound, heaving techno and light installations. Soft Centre was invited this year to lead curation at Dark Mofo’s Night Mass. Alongside a line-up of electronic music expect immersive lasers and mirrors from Japanese media artist Shohei Fujimoto and an installation that uses solar panels to convert light into noise. Look out for Sydney artist collective 110% and its dough pit endurance performance; you might just receive a baked trinket. CPA also celebrates 25 years of cutting-edge arts and culture in western Sydney this month. One Past Liverpool – a mix of up-and-coming artists alongside a retrospective of CPAC’s storied past opens with an afternoon of complimentary wine and food from in-house restaurant Bellbird Dining + Bar.

One Past Liverpool is on September 28 to November 10, 2019. More information here.

Manly Arts Festival
From glass workshops to an open-studio weekend, a zine fair and a cabaret, circus and burlesque show, this annual community arts festival flies somewhat under the radar but is well worth the journey. The program kicks off with a launch party at Manly Art Gallery and Museum and the opening night of highly awarded artist Wendy Sharpe’s new exhibition reflecting on her world travels.

Manly Arts Festival is on at multiple arts venues across the northern beaches from September 6 until 29, 2019. More information here.

The Big Anxiety
For a fix of healing head to Australia’s most progressive and thought-provoking mental-health festival. Exploring social anxieties through the lenses of science and creativity, at the heart of this year’s festival is the Empathy Clinic. It’s made up of 18 works that explore the potential of this powerful emotion to help overcome bias and stigma. Experience sacred Indigenous Australian healing practices and storytelling in a standout virtual-reality experience produced by the Uti Kulintjaku Initiative.

The Big Anxiety is on at various venues across Sydney from September 27 until November 9, 2019. More information here.

Annual awards to watch
More than 670 entries have been whittled down to a final 88 artworks for the 2019 edition of the annual Mosman Art Prize. They’re keeping tight-lipped about the details until the winner of the $50,000 acquisitive prize is announced on September 10. Hidden also returns to Rookwood Cemetery for a sculpture exhibition among the graves. It has more than 30 new installations and brings back its Rookwood Short Films award (launched last year).

Hidden is on at Rookwood Cemetery from September 7 until October 7, 2019. More information here.

Mosman Art Prize is on at Mosman Art Gallery from September 11 until October 27, 2019. More information here.