Another Day in Paradise

Artist Ben Quilty co-curated an exhibition of works by Bali-9 member Myuran Sukumaran. It's a bittersweet elegy to the redemptive magic of art. 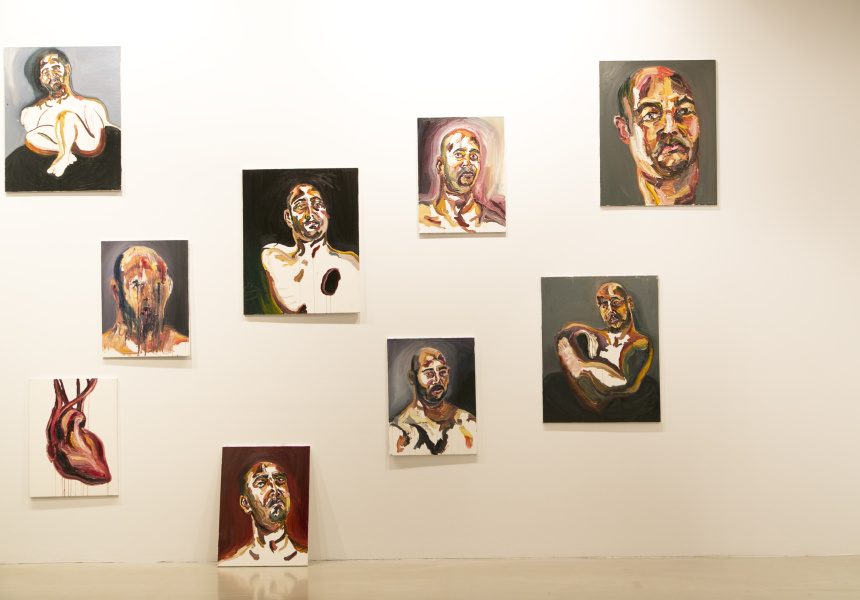 Brushstrokes are declarations. Myuran Sukumaran’s swirls of paint, gingerly daubed onto canvas then layered heavily and deliberately are the markings of a man declaring his faith in the life-giving power of art – even as the prospect of death was closing in.

“When I first met Myuran, he was very humble, quite shy but had a fierce fire and thirst for knowledge about painting,” smiles Ben Quilty, who alongside Michael Dagostino, is the co-curator of Another Day in Paradise. The exhibition brings 100 paintings by Sukumaran, who was executed in April last year with fellow Bali Nine member Andrew Chan, to Sydney for the first time. “He wanted to learn, he wanted to do it. Although the Australian media fed us the message that he was this violent, aggressive enforcer, I met a big, quiet, strong person who was protecting huge swathes of people in that prison. Everyone really respected him. He’d become an extraordinary man.”

Today, the galleries inside the Campbelltown Arts Centre, a short drive from Sukumaran’s old primary school, are dotted with works painted by the fledgling artist while he was incarcerated at Bali’s Kerobokan jail. Along the main wall, a series of self-portraits – one in which his image is doubled, another in which a skull floats above his supine body as a memento mori – are harrowing and powerful, hinting at a search for alternate psychological destinies, even as his external fate was fixed. A body of work entitled The Last 72 Hours, made during his final imprisonment on Nusa Kambangan Island, is harder to take in without blinking back tears. Australian artists Abdul-Rahman Abdullah, Megan Cope, Jagath Dheerasekara, Taloi Havini, Matthew Sleeth and Khaled Sabsabi were also invited to respond to Sukumaran’s paintings with pieces that call for empathy as well as the importance of human rights.

“Painting is like learning to write and if you have a lot to say, you need to learn how to use language,” says Quilty, who became close friends with Sukumaran and later, the biggest advocate for his plea for clemency, after he received an email from his Melbourne barrister seeking advice on new painting techniques. “His language was visual and he wanted to learn how to use it, to speak about who he was. He was a quiet man with a big smile but there was a lot going on. He’d studied philosophy and thought through all the different aspects of what had led him to this gruesome predicament. He wanted to be able to talk about it.”

Quilty, who counts a portrait series of Indonesian and Australian politicians among the artist’s most moving pieces, also believes that the lack of public empathy around Chan and Sukuraman is more complex than it first appears.

“Part of it is due to the colour of Myuran’s skin,” he says, with a pause. “A lot of the criticism Andrew and Myuran received wouldn’t have been leveled at European inmates. I feel as if he looked the way I did, if he was a sixth-generation Irish-Australian, there would have been a far less brutal response in the Australian public. Painting those politicians was so pivotal for him; he had been painting self-portraits but he wanted to engage with the prime ministers of Australia and the president of Indonesia, who’d become the protagonists of his life and future. I want people think more broadly about compassion in our community. Because there are people here who hated him until the moment he died. I want them to come to this exhibition and respond to his humanity. The suggestion that all men who deal drugs should be executed is brutal, simplistic bullshit that needs to be called out.”

For Quilty, whose own artistic trajectory has sought the darker corners of what it means to be a young man in Australia, it’s Sukumaran’s brushstrokes that matter now.

“Myuran was just on a mission to learn how to harness his visual language and in the last 72 hours you got the sense that he was on fire,” he says. “As an artist, you start to get a sense that through a practice you are leaving a legacy, and if you’re sensitive and passionate and good, that legacy will outlive you. They took his life but he had a voice and that voice will continue reverberating after he’s gone.”

Another Day in Paradise shows at the Campbelltown Arts Centre, as part of the Sydney Festival, from January 13 to March 26, 2017.