For Surry Hills-based Ample Projects, a leafy light show in Martin Place at this year’s Vivid Sydney marks its very public debut as a studio. 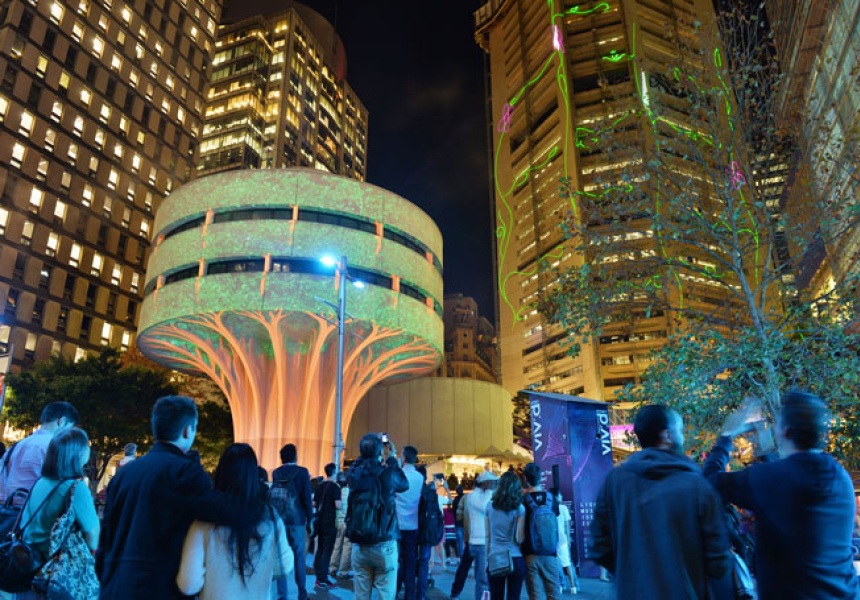 There are 10 minutes until the clock strikes midnight; 10 minutes until the lights of Vivid Sydney make their final flicker and fade to black. Free and outdoorsy, Vivid – an exuberant carnival of light and animation projected across the CBD – has attracted what feels like unprecedented attention this year. Even Circular Quay station has temporarily closed, unable to manage the jostling crowds. For this reason, the later, darker hours prove the best for viewing Martin Place’s Urban Tree Project. Just before 12am things are quietening down, the throngs of wide-eyed punters and tourists are thinning out.

Produced by Ample Projects, a newly launched Sydney collective of artists, designers and general digital doers, Urban Tree Project sees Harry Seidler’s iconic mushroom form (the Commercial Traveller’s Association building) re-imagined. Lit by four strategically placed projectors, Ample Projects’ one-minute, architecturally mapped show begins in darkness, at the base of the building, and works quickly to envelop it entirely in green. Seeds are scattered, shoots germinate, trunks clamour with each other and thrust themselves upward around the circular base of the building; growing ever thicker, creating a lush, green canopy. Set to a cinematic instrumental score (one moment brooding and fortuitous, the next as sweet and sugary as a Disney animation) the trunks expand and forge a single tree, swarming with fauna, taking in the seasonal changes; setting flowers into bloom. And then, just like that, the majestic natural form recedes into the night and the CTA building assumes its original state. For all its brevity, Urban Tree Project is perfectly enchanting, a terse, elegant interruption amid a landscape of grey.

While the team behind Ample Projects brings together a wealth of experience, as a unified business it is scarcely one year old. “We’ve been hiding, really, for a year, with no website,” explains art director Lucy Keeler, one of the five creatives on board for Vivid. “This is a coming out for us, an announcement of who we are. Seeing the tree light up for the first time, when this is the first real project that we have gotten up off the ground from the start … it was very emotional. There was a little tear!”

Nicholas Tory, the project’s creative director, agrees. “Creatively, we believe people get bored with pretty colours on buildings. We wanted to do something that was thought-provoking and accessible.” Within a heavily built-up corporate landscape, the image of a gargantuan tree is a gentle reminder of Sydney’s need for green space and the impact of high-density living. It is gentle in that it removes viewers momentarily from the routine concrete expanse, but is far removed from the position of a damning environmentalist. It’s not just a pretty light show. It’s a quiet commentary.

The application process for Vivid is predictably competitive. Candidates need to ensure their work strikes a balance between technological progressiveness and conceptual strength. There’s a round of expressions of interest where, as Tory explains, companies tend to partner with sponsors to ensure their vision can be realised. No one had previously thought to expand the festivities to the Martin Place vicinity. But after a day spent photographing potential locations, Ample Projects was certain this ‘mushroom building’ was meant to be a tree. Vivid, enchanted by the idea, brokered a partnership between Ample and the building owners. The job was approved with less than four weeks to go.

“It’s a technically challenging building to project onto, because it’s a giant cylinder with ribs underneath it, or buttresses,” says Tory. “Trying to make that transform into a tree in 3D with the lenses and the projectors and the back-end 3D technology [meant] we had to design a very custom way of doing it.” For the technical art director, Martin Crouch, this meant locating a single point of view for the audience – a task in itself when working with a round structure – and liaising with video equipment solutions company TDC to pinpoint projector locations that wouldn't cast significant shadows.

“We were ready a week before and delivered three final versions of the show, really just fixing up little bugs,” Tory says. “We toiled, especially Martin [Crouch] and Julian [Reinhold] over the technical side, but were obviously slightly nervous about what it would look like on the building.” In a moment of serendipity, it worked the first time.

“It really is a break in the festival,” says Keeler, with soft restraint. “The festival is so powerful with colour and speed everywhere else, Circular Quay in particular. When you come to Martin Place, it’s like a little Zen space … You just get to hang out with this soft music and this massive, overpowering tree.” And she’s right. Gathered under the tree, sitting on illuminated neon cubes, are small groups of people; couples, families. A lone tourist videos the projection on her smartphone. A group of twenty-somethings in PVC jackets inhale cigarettes and smile, absorbing the spectacle in silence. As the flood of green disappears, an elderly man squeezes the wrinkled palm of his partner and they turn away, headed home.