All Aboard the Big Easy Express

This vivid documentary celebrates the bond among indie music’s brightest lights as they go on a “tour of dreams”. 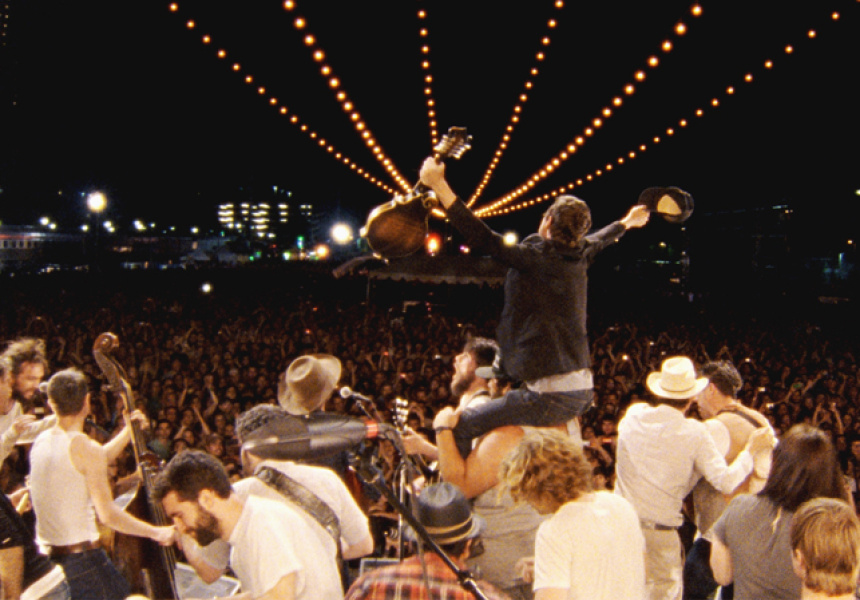 Just three short months after it received a standing ovation and won the Headliner Audience Award at the 2012 SXSW Festival in Austin, Texas, the Big Easy Express is set for release. Available via Apple and iTunes Movies as of today, this vivid documentary directed by Emmett Malloy celebrates the bond among three of the indie music scene’s brightest lights – Mumford & Sons, Edward Sharpe and the Magnetic Zeros, and Old Crow Medicine Show – as they go on a “tour of dreams”.

As much a journey about music as it is a journey across the vibrant landscape of the American southwest, the Big Easy Express narrates its story through wall-to-wall music and the lyrical beauty of the passing landscape, enabling the audience to “see the country the way people saw it more than 100 years ago”, as Zero’s lead singer Alex Ebert says.

The Big Easy Express is one massive jam session, on and off the retro train. Over eight days, they made six stops to perform for jubilant crowds from Oakland to Austin to New Orleans, on what they called the Railroad Revival Tour, in April 2011. Playing hits such as Mumford’s Little Lion Man and the Zeros’ Home, the train was always in the background, a constant reminder of this epic journey bound for glory.

Beautifully shot through train windows and atop carriage roofs, the visual experience emulates a feeling of an old soul yearning for a constant rhythm and harmony, so as to be at one with the world.

“This is music as it’s meant to be seen and heard,” says Karol Martesko-Fenster, president of film and media for S2BN Films, the independent production company behind the film. “I think of it as a visual album because you feel as if you’re right there when you’re watching the film. It’s the closest thing you can get to having a live experience.”

In a ground-breaking distribution strategy, the Big Easy Express is being released straight to consumers with Apple and iTunes Movies before it’s available on any other platform.

“This release strategy is the indie spirit writ large,” says Martesko-Fenster. “In order to get the film straight into the hands of fans around the world on the same day in every country that iTunes has a store, we are bypassing the traditional gatekeepers of film distribution, which has never been done on a global scale. Everyone will be able to own or rent it immediately at the same time and consume it in any way they choose.”

Get on board for the ride.