Ahead of her talk at the Opera House this week, cartoonist, inventor of the Bechdel Test, unintentional agitator and comics pioneer Alison Bechdel talks to us about her book being banned and about the controversy that follows portraying ‘lesbians as regular people’. 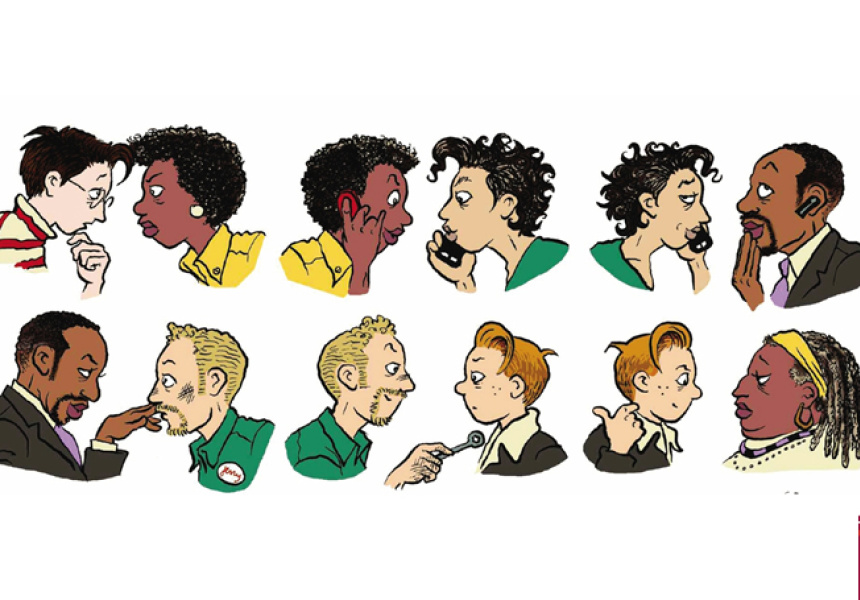 Dykes to Watch Out For

On the line from her home in New York State, Alison Bechdel sounds nothing like the cultural provocateur and radical underground comics pioneer I was expecting. Earnest and forthcoming, she sounds much more like the “nice girl from a small town” that she describes herself as. Her sharp intellect and willingness to delve into her unusual, eventful and, at times, tragic childhood, however, is just as I imagined it would be. A prize-winning memoirist, Bechdel is well known for putting herself out there for her art.

Bechdel’s graphic memoir Fun Home: A Family Tragicomic is about her childhood and early adulthood in 1960s Lock Haven, Pennsylvania where she lived in the family house which doubled as a funeral home business. It covers her father’s suicide, her coming out and her learning of her father’s homosexuality and extra-marital affairs. It was voted Time Magazine’s Best Book of the Year in 2006 and it launched Bechdel and her work – as well as the status of graphic books – straight into the mainstream.

Before then, for most of Bechdel’s 30-year career, her work wasn’t recognised much beyond the underground lesbian publications that published her Dykes To Watch Out For comic strip. DTWOF was groundbreaking because it documented the lives and loves of its LGBT characters and represented the community that Bechdel was a part of. It was political in that its characters were engaged socially and politically, but DTWOF wasn’t dogmatic, navel gazing or preachy and the strip had a sharp sense of the ironic and the absurd. Part soap opera, part satire, its characters were flawed, lovable, funny, and above all, real people who happened to be queer. It was syndicated in more than 50 publications in North America and translated into several languages. Its success and fearlessness elevated comics as a medium. Bechdel, by drawing real-world issues and adult characters, was instrumental in comics and graphic novels becoming accepted and recognised as legitimate texts.

“When I was younger and more naive and idealistic I thought that maybe my lesbian comic strip would end up reaching a wide audience,” says Bechdel. “That sort of happened – but I ended up reaching a broad audience with another very queer story – a story about my gay dad. It wasn’t quite how I thought things would happen. But it’s great.”

While Fun Home made the literary world aware of her work, Bechdel noticed another change happening at around the same time. “The culture around comics has changed in a similar way to the culture around LGBT issues,” she says. “Both of those things were very marginal and sub cultural when I started out in the ‘80s.”

Of course, comics were already mainstream in a sense; they were for kids who loved to read about super heroes – an association that did nothing to help serious comics artists. “Comics began to get taken seriously at the same time as it became possible to tell a gay or lesbian story in a mainstream context,” says Bechdel.

“The comic strip was explicitly political. It was about a subculture. But I feel like the more intimate stuff in my memoirs is also political; my father’s life as a gay/bisexual man before sexual liberation and my mother’s life before women’s liberation are personal and political,” she says.

Where her first memoir work focused primarily on her father, his sexuality and his death, Bechdel’s second memoir Are You My Mother? – A Comic Drama was about her other parent.

This overlap between the personal and the political, the public and the private is a common theme in Bechdel’s work. When I ask about the move from her fictional comic strip to the confronting and tragic details of her family’s story, she says simply, “I feel like they are different ways of doing the same thing.”

Similarly, Bechdel is no stranger to the way in which politics can affect the life of the individual if you happen to fall outside of what the mainstream deems “acceptable”. When it was released, Fun Home was temporarily banned from a library in the US state of Missouri. It was accused of being pornographic because it contained full-frontal nudity.

“It’s funny to think of myself as someone trying to cause trouble,” says Bechdel. “Even my comic strip wasn’t an incendiary or controversial cartoon; it was, ‘Oh, lesbians are regular people, like every one else’. That was always my message. So it was disconcerting to be framed as this deleterious influence.”

The argument at the time was that, because the book had pictures in it, it would appeal to children. “It should never have been on children’s shelves. You wouldn’t put Lady Chatterley’s Lover next to Dr. Seuss.”

Alison Bechdel is also the namesake of the Bechdel Test (invented during a conversation between characters in DTWOF), a barometer used by critics and reviewers to determine whether or not a text is guilty of gender bias. “I have to say that it really wasn’t my idea,” insists Bechdel. “Virginia Wolfe wrote beautifully, and quite hilariously, about what literature would look like if the roles were reversed – if, throughout the whole history of literature, men were treated only as love-objects.”

The Bechdel Test asks: at any point in this book/film/cultural artefact do two female characters have a conversation with each other about something other than a man? You’d be surprised how many fail. “It’s all there in A Room of One’s Own, boiled down to three essential points,” she says.

“This is something that me and my feminist friends were talking about 30 years ago. For us, it was always a given – of course you would want a movie to have well-rounded women characters in it. It’s not a real picture of the world otherwise.”

Alison Bechdel will be appearing at All About Women event at the Opera House on Sunday, March 30, 2014. Tickets at sydneyoperahouse.com/whatson/aaw14_drawn_from_life.aspx.