Dive in for facials, skincare products and aquatic-inspired design. 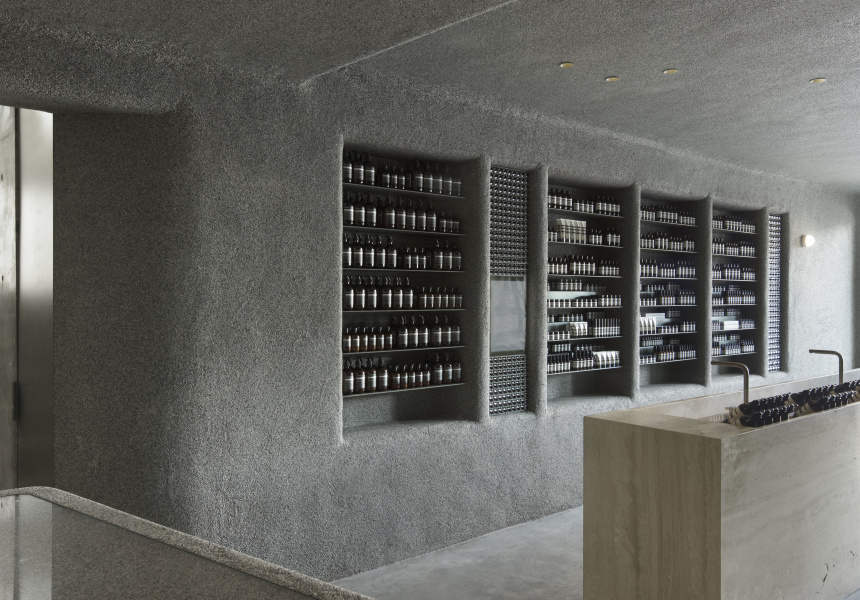 Even if you don’t own any of Aesop’s botanical-scented, handsomely packaged products, chances are you’ve perused its beautiful minimalist stores. Its new space, on Paddington’s Glenmore Road in Sydney’s east, is yet another eye-pleasing haven.

Aesop’s Paddington store relocated last month from Oxford Street, and has been kitted out with a brand-new interior to match its fresh location. It was designed to reflect Sydney’s passion for water, taking inspiration from iconic swimming spots, including Bondi Icebergs and Andrew “Boy” Charlton Pool, as well as the city’s famous ocean baths.

The store is inside a slate-grey terrace and its interior walls and ceiling are studded with grey-green resin-bonded pebbles, as though customers are in an upside-down pool. Steel shelves, upon which sit hand creams, cleansers and face oils, have been designed to mirror the rungs of a pool ladder, and greenery sprouts from benches that curve along the sides of the store like pool steps.

A standalone basin in the middle of the store, in textured sandy hues with mineral layers, rises from the ground like a cliff. Upstairs is a treatment room, where customers can book 60-minute facials adapted to their skin and issues. Aesop’s aestheticians combine ingredients on the spot to address the problems they identify, rather than using products straight from the bottle.

The store has been designed with Melbourne-based Clare Cousins Architects, which it also partnered with to create its Fitzroy space in inner-city Melbourne.

Aesop was founded in Melbourne in 1987 and today offers its formulations in stores around the world, and meticulously designed retail spaces have always been one of the brand’s signatures.