With Millions Passing by Each Year, This Might Be Australia’s Most Seen Artwork 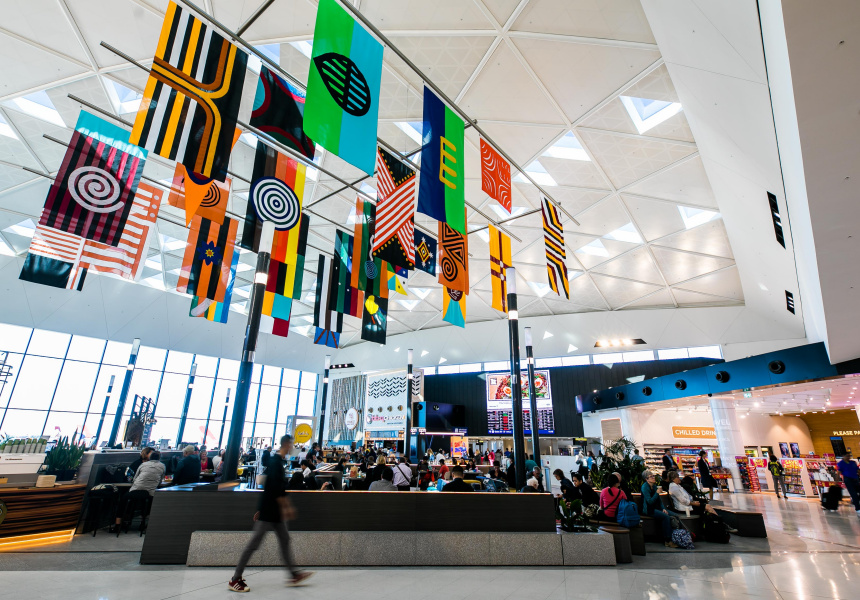 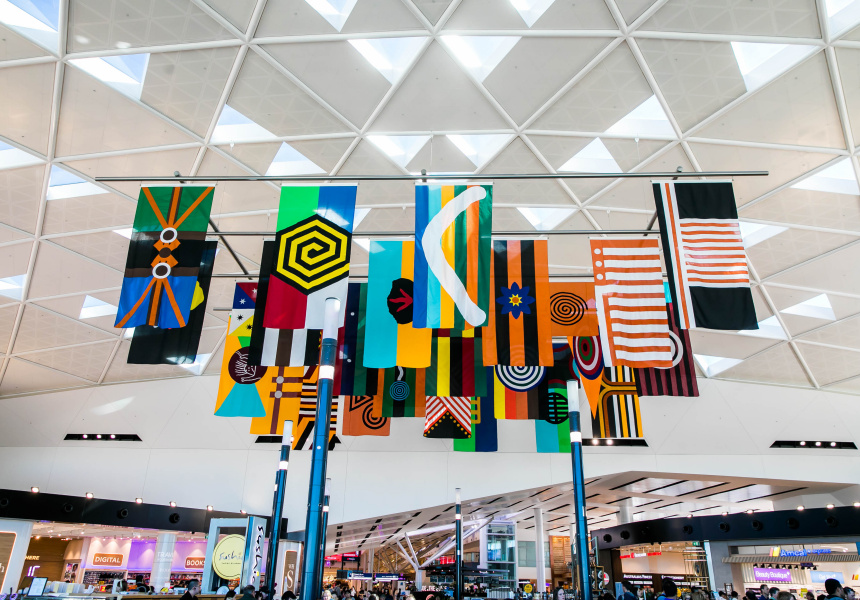 The Museum of Contemporary Art (MCA) and Sydney Airport have pulled off what MCA director Elizabeth Ann Macgregor refers to as a “landmark deal”: a permanent artwork that hangs in the departure hall of Sydney International Airport. It’s created by Kamilaroi artist Archie Moore and will be seen by an astonishing eight million people a year.

Appropriately unveiled on International Day of the World’s Indigenous Peoples (August 9), Moore’s installation was selected from eight entries by a panel including chief commissioner of the Greater Sydney Commission Lucy Turnbull, design director of the City of Sydney Bridget Smyth, and MCA director of curatorial and digital Blair French.

Moore’s work was originally created for The National: New Australian Art in 2017, the biennial art collaboration between the MCA, the Art Gallery NSW and Carriageworks, and represents “nations of the imagination”. The Airport-MCA deal has enabled him to reconfigure United Neytions on a much bigger, permanent scale.

“This opportunity has allowed this series of flags – which celebrate issues of place and identity – to adopt a scale and status that official international flags have. [It draws] attention to the histories, voices and presence of local Indigenous people on whose traditional lands the airport lies, but also the passages of cultures, pasts, territories, ages and cultural knowledges that airports foster,” Moore said in a statement.

CEO of Sydney Airport Geoff Culbert says the installation is not only an opportunity to enliven what had become a fairly non-descript space, but to celebrate a crucial piece of Australia’s past and present.

“Somewhere along the line airports became really boring and bland experiences – a means to an end rather than an experience in itself, and the colour palette became white on white. We want to bring back some excitement,” Culbert says.

“It’s critical the airport reflects the cultural history and personality of Sydney as a city and Australia as a country. Fifteen to 16 million passengers come through this terminal a year,” he says, adding that with tens of thousands departing internationally each day “it may be the single most seen artwork in Australia”.

It’s the first time an Australian airport has commissioned a work from the MCA, although Sydney Airport already has artworks by respected Indigenous artists Judy Watson and Brook Andrew in its collection.

“We have over one million visitors at the MCA [each year], but we want even more international visitors and Australians to engage with the work of extraordinary Australia artists, particularly Indigenous artists, so we’re delighted this helps us expand our reach to hopefully get more people asking questions,” says McGregor.

Presenting an alternative story to that of colonial Australian history, United Neytions is made up of five-yard flags (456 x 288 centimetres) sewn using woven and knitted polyester fabrics, each reflecting ideas relating to Aboriginal culture and identity. University of Technology Sydney professor, author and filmmaker Larissa Behrendt says she hopes the work will encourage departing tourists and locals to consider the diversity of Indigenous Australia and their own relationship with that.

“As a provocation for people leaving Australia, whose only real contact with Indigenous culture may have been what they saw in souvenir shops, maybe they’ll have a chance to think about the connection between first cultures and the Australia they saw,” she says. “People will come past and see this connection to ancient cultures and think through the consequences of this diversity. You can celebrate the fact there are a range of different Aboriginal cultures Australia shares the land with, but what are the deeper consequences of that; what does it mean in terms of Aboriginal identity; what does a reconciled Australia look like?”