The 23rd Biennale of Sydney Opens This Weekend – Here’s How To Navigate Its Expansive, Free, Program

More than 330 artworks by 80 “participants” are spread across six precincts. And its theme – rivus, meaning “stream” in Latin – feels particularly pertinent in the wake of recent events. 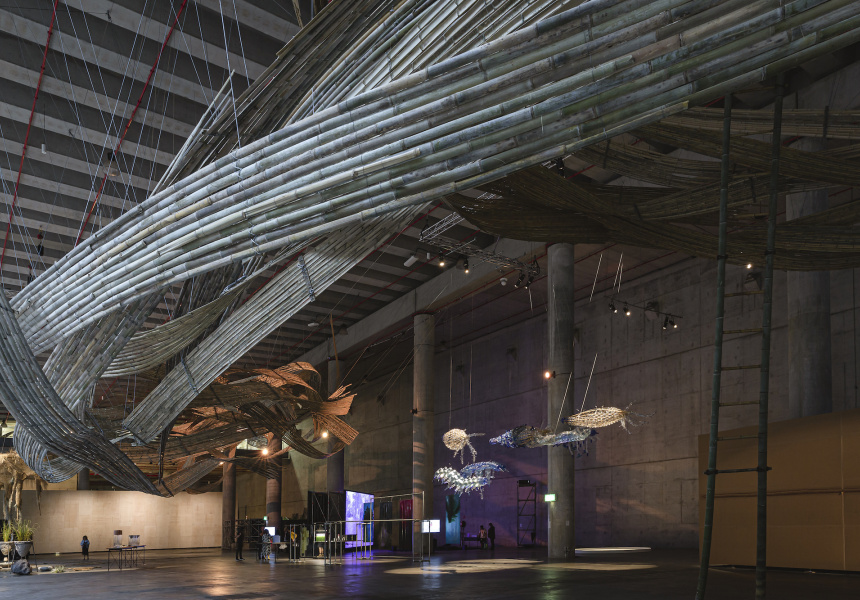 It feels appropriate that the theme for the 23rd Biennale of Sydney, which launches to the public on March 12 and runs to June 13, is “rivus”. The word means “stream” in Latin, and the more than 330 artworks respond to the ecologies sustained by waterways of all sorts around the world – fitting as the community reels from extreme flooding in northern NSW and parts of Sydney.

Along with artists, architects, designers, a soundscape ecologist, composers and even rivers themselves have contributed works to this year’s Biennale – so rather than using the word “artist” the festival is opting for a more inclusive catchall of “participants”. This year’s festival is the first to be curated by new artistic director, Colombian José Roca.

Works from more than 80 participants are spread across six hubs: the Art Gallery of New South Wales, Barangaroo, the Arts and Cultural Exchange, the Museum of Contemporary Art, the National Art School and Pier 2/3 at Walsh Bay Arts Precinct. Works aim to give voice to waterways and ecologies, as we face up to a looming environmental collapse.

The Biennale encompasses monumental ideas on a large scale – and it’s hard to know where to begin with so much happening (did we mention there’s also more than 400 events happening across the three months of the festival?). Here’s a precinct-by-precinct guide to working your way through the Biennale.

Barangaroo, including The Cutaway
The cavernous concrete good looks of the subterranean Cutaway have been put to clever use for this year’s Biennale. Suspended from the ceiling, stretching from one end of the space to the other, is Flow, a 600-square-metre bamboo structure by Sydney multidisciplinary studio Cave Urban, which mimics the fluidity of a river. Down the far end of the room is a sculptural sound installation by Mexican artist Tania Candiani. Hovering above the floor, the cluster of branches alludes to the forks and flows of rivers; tiny speakers connected to the branches chirp the sounds of Australian migratory birds.

Elsewhere, Peruvian artists’ Ana Teresa Barboza and Rafael Freyre striking installation is a wetland woven by a family of master weavers using native Peruvian plants, with other organic matter including rocks appearing alongside water “purifiers” made from woven materials.

Two key installations for the Biennale can also be found at Barangaroo. The Great Animal Orchestra is a large-scale immersive installation presented in partnership with Fondation Cartier pour l’art contemporain. Step inside a marquee set up on the Stargazer Lawn for an otherworldly – yet very terrestrial – experience. Piping through the space is a soundscape of 15,000 animals recorded over 50 years by “soundscape ecologist” Bernie Krause. It’s an invitation to listen to the beauty and variety of nature before human activity silences it forever. And a mirrored pavilion on the Barangaroo headland will host Irish artist John Gerrard’s Leaf Work (Derrigimlagh), displayed on a six-by-six-metre LED wall. It follows a female figure circling an empty landscape, animating the environmental trauma of the climate crisis.

Museum of Contemporary Art
Ancient histories and primal waters inform the works at the MCA. Venezuelan-born, Paris-based artist Milton Becerra’s large-scale work, Lost Paradise, commissioned for the Biennale, sees three stones suspended by a nexus of thread, which not only provides structural support for the levitating stones, but is also a visual metaphor for energy being projected out of the stones.

Another highlight is a 365-million-year-old fish fossil from Canowindra in NSW, which is being displayed to the public for the first time. German designer and researcher Julia Lohmann has also contributed a piece, Corpus Maris I, a sculptural installation made from seaweed, rattan and plywood. Lohmann is the founder of the Department of Seaweed, which researches how the algae can be used in design.

Pier 2/3 at Walsh Bay Arts Precinct
Pier 2/3 hasn’t been used by the Biennale in 10 years, as it’s been undergoing redevelopment. Now it’s back and, fittingly for its harbourfront location, is devoted to “briny” environments, where saltwater and freshwater collide. Casino Wake Up Time, a collective of Indigenous women in northern NSW, has not only contributed a work of traditional Bundjalung weaving, but harvested and picked the fibres for the piece from local wetlands and rivers.

British-Finnish artist, composer and performer Hanna Tuulikki has contributed a haunting video work about mythological selkies – which can change from seal to human – in which she sings and explores multi-species communication.

Arts and Cultural Exchange
Manila-based multidisciplinary artist Leeroy New delves into ancestral creation stories at Parramatta’s Arts and Cultural Exchange. New’s work, made using bamboo and recycled water containers, plastic bottles and bicycle wheels, has been wrapped around the façade of the building in a formation inspired by the organic roots of the Southeast Asian balete tree.

National Art School
Still and stagnant waters are the centrepiece of the National Art School’s exhibition, which is presented in collaboration with Artspace. Highlights include a large-scale mural by Colombian artist Carolina Caycedo, depicting satellite photographs taken over the years as the Magdalena River in Colombia has been progressively destroyed by El Quimbo Dam.

There’s also a traditional possum-skin cloak showing the songlines of the Gomeroi people, made collaboratively by the local First Nations community from Boggabilla to Glen Innes – they include elders and the descendants of survivors of the Myall Creek Massacre, in which at least 28 unarmed Aboriginal men, women and children were murdered by colonists in 1838.

Art Gallery of NSW
Works at the AGNSW are themed around rewilding and caring for Country. Barkandji artist, cultural heritage consultant and environmental activist Badger Bates has contributed a linocut wallpaper depicting the fish kills in a drying-up Lake Menindee.

English multi-disciplinarians Ackroyd & Harvey have used native grass – cultivated by Aboriginals and destroyed by colonists – as the canvas for large-scale photographic prints of environmental activist Lille Madden and her grandfather and Gadigal elder Uncle Charles (Chicka) Madden. Over time the prints will fade, thus acting as a reminder of the climate crisis.

And provocative contemporary artist Mike Parr’s contribution is a tribute to German artist Joseph Beuys’s 7000 Oaks project, in which he planted 7000 trees over five years in Kassel, Germany. An iteration of that monumental work is planted outside the AGNSW (on a much smaller scale). Parr will recreate a 1975 work by Czech artist Petr Štembera, Asleep in the tree for three days in the Blue Mountains; video footage taken of his performance will be shown in the gallery. 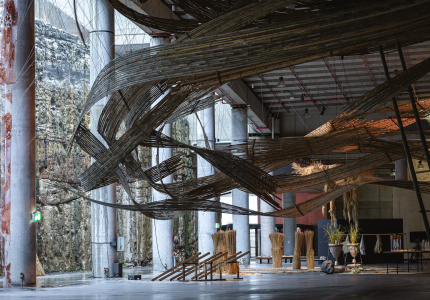