Head down a musical memory lane with some of the frontrunners from the last decade at FBi radio. Sydney’s community radio station, FBi, turned 10 on August 29, 2013. It rolls out the best independent work, the most obscure sounds from the farthest corners of the Earth and the freshest turnover of new, unheard releases. They vouch for the exciting potential of underrated heroes, giving hard-working artists the air-time they deserve and leading the evolution of music. All the while maintaining their patriotic policy of ensuring 50 per cent of what you hear is homegrown. Broadsheet speaks to 10 FBi presenters, past and present, responsible for making sure that tuning in to FBi always a surprise.

“I had Neil Finn on my program, Radiant, in 2011,” says Adam Lewis; purveyor of DIY, garage and indie tunes. “Despite it probably being the scariest radio experience of my life, he was an absolute gentleman and one of the most down to Earth and friendly guests I’ve ever had on the show,” he says, recalling Crowded House playing on repeat in the car as a kid. Finn was in town promoting his indie side-gig Pyjama Club that he started with his wife. “It was a total fan- boy highlight,” says Lewis.

“[US rapper] Spank Rock caused havoc while co-hosting the show during our third or fourth supporter drive,” recalls Anna Burns. “We broke a whole lot of supporters which was amazing.” Over a nine-year commitment to the station, this FBi veteran was able to meet many of her favourite musicians. “My first ever interview was with The Jon Spencer Blues Explosion,” she says, “I was a huge, huge fan and they came in and only answered everything in song.”

Levins was the second person ever on air at FBi way back in 2003 and he likes to do things his way. “One of the first times I ever DJ’d was at our Christmas party in 2004 upstairs at the Mandarin Club,” he says. “All the DJs were playing cool, credible stuff but no one was dancing.” Enter Levins; “And then my friend Linda and I got up and just started playing atrocious pop music that you would never get caught dead playing on FBi. We played it for two hours and suddenly the dance floor was heaving and everyone was going bananas.”

“For Valentines Day every year I put on ‘Indie Love Song Dedications’ on Unputdownable, my experimental indie show,” says the station’s cupid; Eliza Sarlos. “I’d get so many people sending in requests and it was great to get that sense that there are actually people out there listening and loving FBi and what you do. Being able to facilitate some little romances was very fun. It w as from 11pm-1am so it w as also nice to know that people were listening so late!”

“One [Levins] out of the four of us had training when we started,” says Jim Singline – one quarter of the terribly missed sunset show Ro Sham Bo. “We had the worst mic etiquette and never thought about the dirty lyrics in any of the dancehall or hip hop tracks we were playing,” he says. They gained their own mini scene and international respect anyway, playing Regional (Jamaica, Dirty South, Brazil) club music. “We were given the space to be loose and represent what we were passionate about,” says Singline.

“We dared our presenter Xannan to do his last show naked,” laughs Lexy Savvides on her time as a producer for the request show Represent. “We had come from an FBi party and we thought he’d never do it but at 9:50 when he did his last mic-break, signing off, he started stripping off,” she says. “We were just screaming on air. I don’t know who was sitting on the chair afterwards but it made for fun radio.”

In response to the GFC threat in 2008, a series of fundraising parties were organised by the community to ‘Save FBi’. Marty Doyle - host of all things psych, soul and country - remembers the shared altruism of everyone supporting the cause; “That was a big first step towards putting FBi into the subconscious of a lot of people,” he says. “Everybody started pitching in and going, ‘oh my god – FBi is majorly important.’ It was the first time I’d seen a collective effort for the station outside the station.”

Taking up the weekday breakfast show slot, Up For It , was a considerable achievement for Sally Knight. “Being one of the only female Metropolitan Sydney breakfast radio presenters was a big deal for me. The signal goes out to Gosford and the Blue Mountains – it’s quite a big reach – and while we don’t really know how many people listen, it’s a really great way to talk to people of Sydney.” In 2012 she had the opportunity to interview Nile Rogers; “This was before the big Daft Punk thing exploded and I had already been a huge fan of Chic and Nile Rogers,” she says. “I was star struck.”

Shantan Wantan Ichiban: 2003-pres.
AKA: Shazzy bear; Shazzy-B.
Shows: (6-8pm) Stolen Records “I had Shaggy in the studio once,” says Shantan Wantan Ichiban. “We put on a couple of rhythms and he just did his thing over it; he freestyled, did a couple of verses and performed for us live in the studio.” Shantan has been with FBi since day one and likes to remember the rowdier moments; “You see, Stolen Records used to be a late-night gig where we’d have all these drunken rappers coming in and doing freestyles and generally acting like buffoons on the radio show,” he says. “We also had a ‘No Pants’ themed Christmas party once where Lewi McKirdy [now a Triple J host] turned up in a leopard G-string. It didn’t stay on for very long”.

FBi celebrated their birthday with a sold- out festival at Carriageworks in September - pulling their favourite bands, DJs and musical moments from over the years together for one massive, nostalgic throwdown. “It felt like everybody’s birthday,” says Thomas McMullen, co-host of Friday Arvo with Sweetie and Shag. “It was so well-received and had such a great crowd. I ran into so many people I hadn’t seen for a while and so many that I knew purely from FBi. Everyone was really happy about celebrating something.” 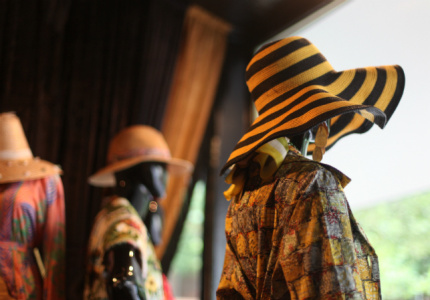