Every summer, our swimming correspondent asks a few Sydneysiders where they like to get wet (and where they have coffee afterwards). In this edition, we hear from fashion designer Anna Quan, Broadsheet editor Sarah Norris, and chef Giovanni Pilu, among others. 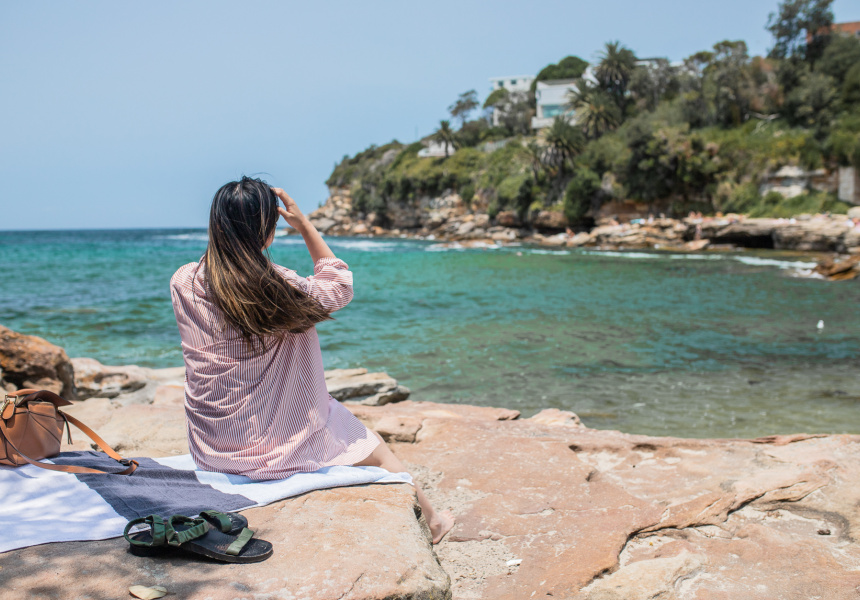 Where Sydney Swims is a series of conversations we enjoy having every summer about these very things. This time, we talk to a chef who trains in Freshwater for triathlons; an ocean-swimming editor in Bondi, and an author who gives us a list of swimming-inspired reading for summer. Whether it’s a beach, a tidal harbour swim or a chlorinated suburban pool, these are the places thousands of Sydneysiders will spend their days this summer.

When Quan launched her eponymous clothing label a few years back, she made a splash by reinventing the white shirt. And at this year’s Australian Fashion Week she debuted her resort ’20 collection, featuring a real throwback – tailored stretch pedal pushers. She’s happiest alone at the beach, with a bag of magazines.

What does summer in Sydney feel like to you?
Balmy and salty. Growing up in Mount Colah I remember the sound of cicadas in the evening. I remember the cooling winds against my face and the whooshing sound of the leaves in the trees.

Where do you usually swim in summer?
Gordons Bay. I love the seclusion and the extra effort to get there. As I’ve gotten older I prefer beaches with less sand. I distinctly remember this time when I was about four years old and my older cousins took me to Bondi Beach while we had family over from Texas. They were playing with sand and, somehow, it got into my jelly cup snack, and I ate it. Ever since then, less sand is better.

What are your beach essentials?
A large beach towel, waterproof sunscreen, Mecca SPF 50+ and the waterproof body version. My Celine prescription glasses that transition into sunnies (the best investment ever!). A hat and a large beach shirt with sleeves – so I don’t burn. I’ve designed a new season resort shirt called Alfie, specifically for the beach. It’s light and thin but durable. It’s an oversized shirt that covers your bottom to a good length and the proportions work nicely across your shoulders. Usually, there’s a huge trade-off if you go for a shirt that’s long – it’s not so great across the shoulders.

Where do you have a coffee or a drink after?
Three Blue Ducks in Bronte – or I grab a coffee takeaway and go for a walk around the Waverley cemetery. It sounds a bit macabre but it’s quite a nice cemetery, and you get to take in the ambience of the coast that way while enjoying your coffee.

What is your summer theme song?
Under the Boardwalk by The Beach Boys (but really, the Bette Midler cover). I’m a child of the ’80s and remember watching the movie Beaches with Bette Midler and Barbara Hershey as a child. It’s stuck with me ever since.

Norris, a Bondi local and true water-baby, has been the editor of Broadsheet Sydney since 2017.

Are you more of a lap swimmer or a leisure swimmer?
I do a bit of both. I swim laps once a week, before work, at the subterranean, brutalist-style Cook and Phillip pool (under St Mary’s Cathedral) in winter and at Boy Charlton or Icebergs when the weather gets warmer. When I want to frolic I head to the north end at Bondi (because the waves are easy), Bronte ocean pool or, if I’m settling in for a day-long visit, I go to a harbour beach, such as Camp Cove in Watsons Bay.

I hear you also swim the bay in Bondi – do you feel like ocean swimming is as much mental as it is physical? Tell us about this.
Oh, totally. It took me a couple seasons to build up the nerve to swim across the bay, and when I finally did it, I kicked myself ’cos it really isn’t that tough. It’s absolutely more a mental game. I think if you can swim 20 laps (one kilometre) you’ll find it easy. Just pick a sunny day when the ocean isn’t angry. And don’t let your imagination get the better of you.

Where is the best place for a drink after a swim?
This summer it might be hard to go past the new Terrace bar at Icebergs, at the south end of Bondi.

If you took a post-swim picnic with you, what would it include?
We take the beach picnic pretty seriously in our house. We marinate meat and put it on skewers the night before, and take a pack that includes a portable barbeque, blanket and a mini sound system for tunes. There are some great shady spots at Camp Cove and after swims we cook corncobs and the sticks and graze on cut-up carrots and capsicums. A bottle of something savoury and peppery is essential, perhaps Esoterico by Unico Zelo or anything by Lucy Margaux.

You may know Macdonald as the co-host of news, current affairs and talk show The Project, but you’re about to see more of him. He’s recently been confirmed as the new host of ABC’s Monday night panel show Q&A. 2019 has been a big one for Macdonald, so he’s had less time than usual. “I really enjoy an early morning swim,” he says. “But for the last five months I’ve been doing breakfast shifts on Radio National, so I haven’t been able to.”

In summer he jumps off the rocks at Ben Buckler at North Bondi and trains for ocean swims in the bay. He’s swum the Bondi to Bronte and the Palm Beach to Whale Beach routes, and regularly swims from Manly to Shelly Beach. He also swims at Northbridge Baths and North Sydney Olympic Pool. “I love the hutches and little alcoves at the side of the pool there,” he says. “It’s a great time capsule of Sydney from the past. I love going down there with Mum, swimming some laps and having a chat with a coffee in the sun. That’s a pretty nice way to spend a morning.”

Macdonald grew up in Jindabyne but spent a lot of his childhood in the northern beaches. Both his grandmothers lived there and they’d swim at Newport and Avalon, both on the Pittwater and beach sides. “Those are still favourite spots,” he says.

When the Sardinian chef isn’t at one of his namesake restaurants, Pilu at Freshwater, Pilu Baretto and Aquafresca by Pilu, he’s likely in the pool, doing laps.

“I try to swim every day of the year, because I do a couple of triathlons,” he says. For a casual dip he’ll head to neighbouring beach North Curl Curl, as he lives just across the road from the surf club. But during summer, Giovanni swims at Freshwater Ocean Pool, weather depending. “I’m Italian, so it’s got to be warm. I don’t like swimming in the cold weather like Australians,” he says.

He occasionally swims (in a wetsuit) with Bold and the Beautiful, a squad that leaves Manly every morning around sunrise and swims to Shelly Beach and back. On Sundays, his wife will do the walk with their dog while he does the 1.5-kilometre swim and they’ll meet for breakfast in Manly after. “We usually grab something from Rollers Bake House, a tiny hole in the wall with brilliant pastries and good coffee.”

Pilu says swimming allows him to relax and clear his mind. “My job is talking to a lot of people all day, so jumping in the pool is like, ah man, I switch off. It’s really great, I love it.”

Spruhan just published her first book, The Memory Pool, a collection of short stories about swimming, written by 28 Australians. She grew up swimming in and around the north shore but now lives in the inner west.

Where do you like to swim locally in summer?
Lap swimming – outdoors at Petersham and Leichhardt pools. And when the sun is too strong for my fair, freckled skin, indoors at the Ian Thorpe Aquatic Centre in Ultimo or the Annette Kellerman Aquatic Centre in Enmore. My first love is saltwater, so I also enjoy returning to my childhood pool, Northbridge Baths on Sydney’s Middle Harbour (especially at high tide) or to one of the ocean pools at Coogee. Giles Baths at the north end of the beach is a particular favourite for the marine life and the chance to swim with a blue groper, which I’ve been lucky enough to experience twice.

What are you reading this summer?
I’m a big reader and a particular fan of Australian writers such as Trent Dalton, Ashley Hay and Leah Purcell, whose childhood pool stories are in my new book, The Memory Pool. This summer I’ll be reading Leah’s The Drover’s Wife and catching up on Tim Winton’s 2018 novel The Shepherd’s Hut. I’ll also be dipping into Kitty Flanagan’s hilarious 48 Rules for Life; Claire Bowditch’s memoir, Your Own Kind of Girl, as well as a few water-related books such as Libby Trickett’s Beneath the Surface, Sophie Green’s The Shelly Bay Ladies Swimming Circle and returning to an old favourite, Swimming Studies by Leanne Shapton. 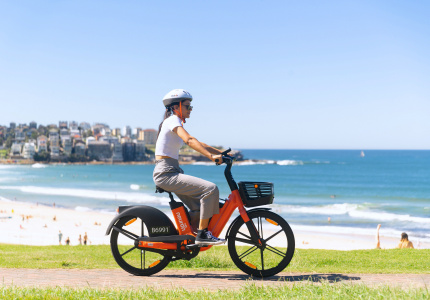 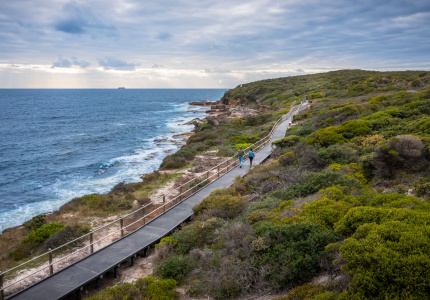