Streets of Your Town: This Sydney Runner Has Pounded Every Pavement in the Inner West

Pedro Queiroz, a data analyst from Summer Hill, has a years-long project “street collecting” the area’s best running spots. It’s the lockdown fitness inspo we could all use right now. By now, we all know which pandemic person we are.

There’s the wallowing category, vexed by the gloominess of it all, achieving nothing bar the empty satisfaction of yet another Chappy-fuelled bender on the couch starring the latest straight-to-streaming dud.

Then there are those types you read about – the ones that get shit done, making the world a more interesting place, and the rest of us look like a pack of burger-bingeing, cocktail-swilling sloths.

He’s just completed his “magnum opus” – an ambitious, and frankly inspiring, project to run down every street in the Inner West Council. It’s taken him from Camperdown to Croydon, Mascot to Birchgrove, and every suburb in between.

“I moved to Summer Hill in 2016 and pretty quickly ran all the streets in the suburb. So I guess that’s where it started,” he tells Broadsheet.

A self-described “completionist”, Queiroz would print out maps, whack them in a plastic sleeve and take them with him on daily runs through what was then the Ashfield Council area.

“I started by trying to complete the [former] Ashfield Council area. But when I was at about 80 per cent, the tracking app I used updated its data to include the newly merged Inner West Council and I was back in the low twenties,” he says.

Disheartened for “maybe” a day, Queiroz set out to conquer the new super council’s streets in earnest at the end of 2019, ditching the maps and upgrading to a smartwatch with navigation. “It would’ve taken me 20 years to finish if I carried on like that,” he says.

An average 10-kilometre “street-collecting” run would take him about an hour. But he reckons he’s blown that out to 30 kilometres in less than four hours at a stretch. “The most streets I ever did in a single run was 90,” he says.

Before you get sucked into a shame spiral at the thought of your recent lockdown loafing, it’s important to mention that Queiroz is no rookie runner. Since moving from Portugal to Australia in 2010, he’s completed 10 marathons in five different states and territories, and has pounded the pavement in 20 different countries including North Korea, Portugal, Argentina and Fiji.

He’s been training for one postponed marathon to another, working the project into one seemingly endless training period. And, because he’s a data analyst, he’s crunched his numbers. They’re impressive to say the least; totalling 14,280 kilometres at the time of publishing.

Queiroz tells us the Cooks River cycleway is a beautiful spot to run along. But there’s one place he reckons is the Inner West’s “best-kept secret”: the grounds around the former location for the Sydney College of the Arts, in Rozelle.

“It’s an area between Balmain Road and the Bay Run with lots of green spaces, quiet roads and mostly empty buildings. It’s very different from anything else in the Inner West, and I don’t think many people know about it.”

The toughest suburb to run around? Balmain. “It’s hilly, has a tonne of little streets and it’s one massive dead end. But it also has the prettiest views of the city and the harbour, so no hard feelings.”

Queiroz doesn’t plan to hang up his runners any time soon. He intends to collect the Burwood, Strathfield and Canada Bay council areas, and tick off Western Australia, the Northern Territory and Tasmania in a long-term project to run a marathon in every state and territory.

“I like travelling and I miss it. This little project showed me that there’s plenty to see just outside my doorstep,” he says.

“Running, cycling or walking, we live in a beautiful city and country, and even places we’ve driven past hundreds of times have something to offer when we slow down and come closer.” 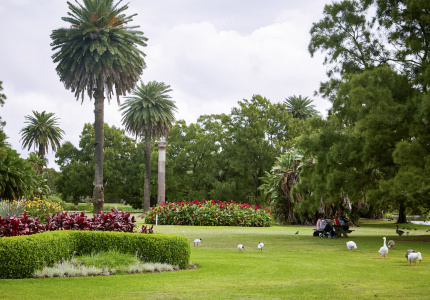 Nine to Try: Virtual Fitness Classes for Working Up a Sweat During Lockdown