Fitness heavyweight Ellice Whichello and former NRL footballer Daniel Conn want to empower others to take control of their health and wellbeing. “Boxing has been around as a sport for a long time, and it’s a great way of finding a mental release. Plus, the physical demand on the body is something like no other,” says Australian wellness coach and boxer Ellice Whichello.

Whichello is one of the co-founders of Hustle Boxing in Potts Point, along with former NRL footballer Daniel Conn and lead trainer Andrew Pap. Their purpose-built studio hosts eight classes each day. During the week classes run for 50 minutes, but on Saturdays there’s a longer session called The Godfather, designed to challenge and build on the routines taught during the week. The classes consist of eight to 16 rounds and provide a full-body workout incorporating boxing (on aqua bags, to absorb the shock of each punch and protect the wrist), resistance bands and weights. The studio also uses YBells, an innovative four-in-one dumbbell designed in Sydney.

There are also smaller classes (and classes for corporate clients) held throughout the day, plus a personal-training room called the Boom Boom, with aqua bags and a mural of Beyoncé. “The room has its own surround-sound system for music, so it’s a great way of having fun with a more personalised approach,” says Whichello.

Designed by Interior Life architect Tomas Scerbo, the studio has lofty ceilings, 65-inch LED screens to cue each move, neon lighting and a $90,000 sound system. Playing on that sound system: custom mixes created by Hugo Gruzman (one half of Sydney electronic act Flight Facilities) and Aaron Bannie (DJ A Game). The state-of-the-art bathrooms feel like being in a five-star hotel, with luxury bath products, Dyson hairdryers and make-up stations.

But Hustle isn’t just about shiny gloves and sleek interiors. The venue is the culmination of the team’s desire to align physical and mental health. They want everyone from dads who’ve avoided the gym for years to new mums to feel welcome in their studio. “Exercise has always been a big part of our life and it’s time to really show people that wellness is something anyone is capable of achieving,” explains Whichello.

The team members each bring their own unique background with fitness and mental health to the venture. After a spinal injury put Conn on the bench at just 25, his focus shifted towards empowering others to take control of their health. For Whichello, boxing helped her unlock her confidence and find her feet in the world, something she hopes she can help other women achieve.

“Life happens and everyone has their own story. Going to the gym or hitting a bag, there’s so much more that can come from it in terms of overcoming stuff in your personal life and feeling accomplished, strong and confident,” she says.

The team hopes the Potts Point studio is the beginning of a new fitness empire in Sydney, with plans to open more studios across the city in the next 12 months.

Passes start from $35 for a drop-in class, with a range of direct-debit memberships and class passes available.

This article first appeared on Broadsheet on August 7, 2019. Some details may have changed since publication. 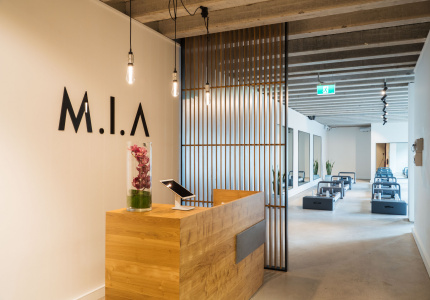