Its design is inspired by ’60s beach culture, with striped cabanas, wide lounge seats and an irregular-shaped beach pool. Plus, a pastel-hued play area, outdoor training gym, and a bronze artwork that pays tribute to coastal First Nations communities. Sydney isn’t lacking great swim spots – we have everything from ocean pools and natural swimming holes to sandy beaches and lap lanes. Now, one more location is being added to that long list.

The city’s newest pool complex, Gunyama Park Aquatic and Recreation Centre, opened in Green Square on February 1. Its name is derived from the strong southerlies that blow through the area – “Gunyama” means “wind from the southwest” in the local Dharug language.

With a 50-metre heated outdoor pool hugged by a leisure “beach pool”, a 25-metre indoor pool, a hydrotherapy pool and a pastel-hued water playground, it’s the largest new pool complex built in Sydney since the 2000 Olympic Games. It also includes a full health and fitness centre, an outdoor training gym, a synthetic sports playing field, a creche and a cafe.

Andrew Burges Architects and Grimshaw and TCL are behind the design, which takes its cues from Sydney’s 1960s beach culture. More than 76,800 blue and white tiles line the pools, and outside there are striped cabanas, vintage-inspired yellow-and-white beach umbrellas, and wide lounge seats shaped to mimic the feeling of laying down on the sand.

The roof is dotted with 420 solar panels, and a natural-gas cogeneration system helps power the site. There’s also a large rainwater tank to reduce the centre’s environmental footprint.

And there’s another connection to First Nations culture, beyond the name: Gorawarl and Jerrawongarla artist Aunty Julie Freeman and Wiradjuri and Kamilaroi artist Jonathan Jones were commissioned to create an artwork that roots Gunyama in the area’s historical and traditional roots.

The result is two bronze sculptures depicting bangala, traditional water carriers used by communities along Australia’s east coast. Water spills from the sculptures onto the ground, in a nod to the freshwater creeks and wetlands that coursed through the area before it was drained in 1908. Parramatta Is Getting a New, $88.6 Million Aquatic Centre With Three Pools, a Water Playground and Spa and Sauna 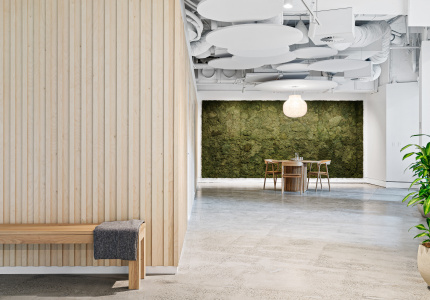