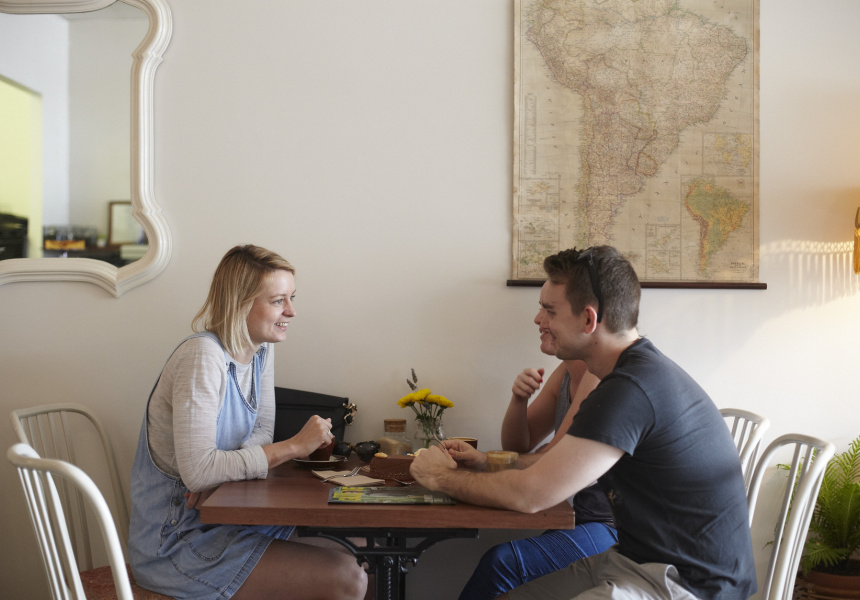 Karnovsky mans the coffee machine and he knows what’s what – he’s worked in the industry for many years, including at Fremantle’s The Grumpy Sailor. He’ll happily chat music with fellow vinyl lovers (he’s a life-long collector), and there’s always vintage music on in the background.

The menu features classic New York-deli fare, including Karnofsky’s favourites, mamma’s matzo ball chicken soup, and blueberry-cheese blintzes with caramelised banana. The bagel line-up (courtesy of Holy Bagels, of course) is everything you could wish for, with flavours such as corned beef with pickle and mustard aioli.

Kudos to Karnovsky’s mum, who bakes the sweet treats, such as pumpkin-rum-raisin bread with maple butter; peanut choc cookies; and various cakes, including some free from gluten. Gluten-free bread is also available for savoury menu items.

As jazz-lovers know, “Satchmo” was Louis Armstrong’s nickname, with whom Karnovsky shares an intriguing connection via his family tree. The Karnofskys of New Orleans took the impoverished Armstrong under their wing when he was a boy and helped him realise his musical ambition.