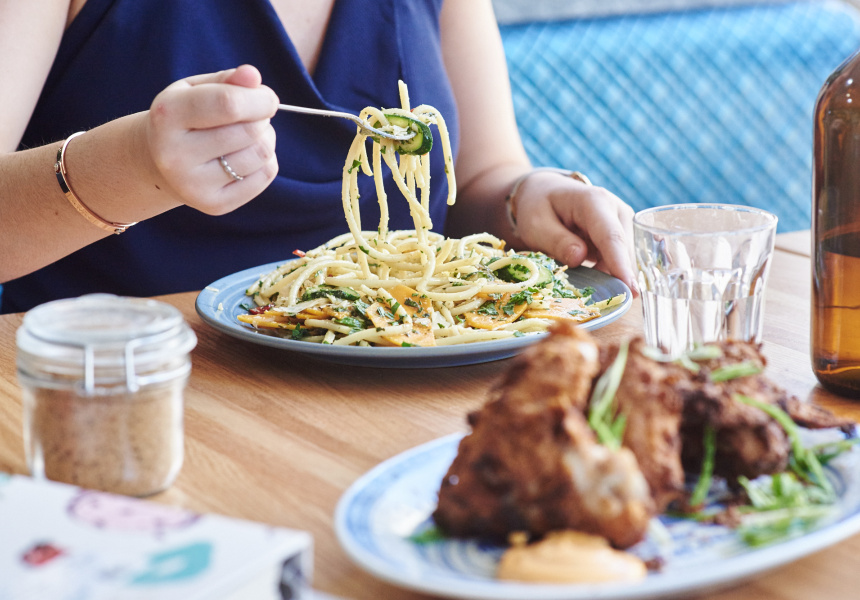 Grindhouse Café is at Edith Cowan University’s Mt Lawley campus (non-students: the university’s Bradford Street public car park is your nearest parking option). Its cabinets are filled with sandwiches, salads and other ready-to-go meals. And although most of its customers wear backpacks, once inside, it’s clear you’re not in (the University of) Kansas anymore.

Colourful wall murals contrast with the glossy concrete floor. Pendant lights hang overhead. White tiles frame the bustling open kitchen. You could transplant the cafe into the middle of Beaufort Street and people would think nothing of it, which is exactly what owner Alicia Mulé is after. According to her, students should have access to high-quality, inexpensive food. Mulé keeps the costs down by making everything in-house.

Mulé’s brothers, Adrian and David, are in charge of roasting the beans. Their interest in working with small parcels of coffee means the blends at Grindhouse change regularly.

The food is the work of Jacob D’Vauz (Rockpool, The Trustee, Uncle Joe’s Mess Hall). While bucatini and ciabatta with braised white beans reflect the cafe’s former Italian bent, Asian influences dominate and make for a menu that appeals beyond ECU’s student body.