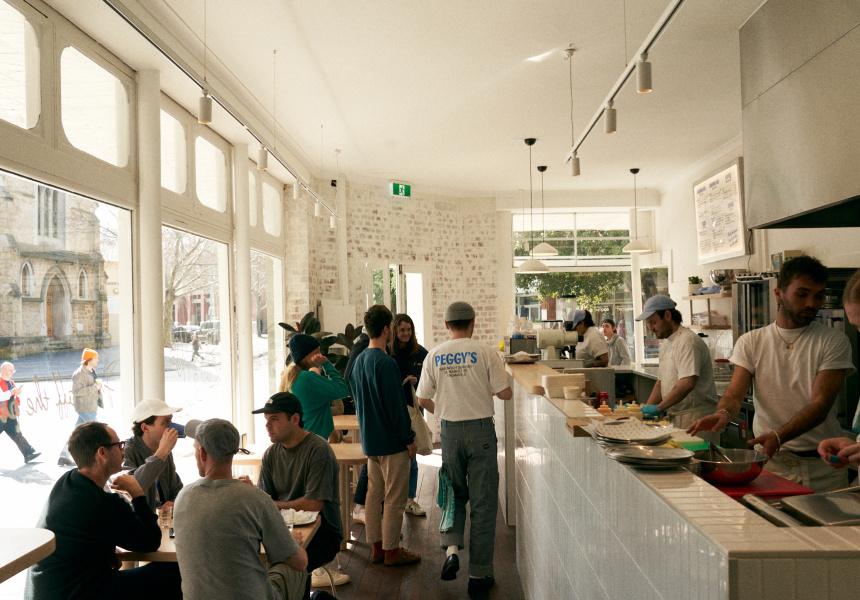 Peggy’s is a solid addition to the West’s stacked sandwich scene, which counts Perth pioneers Re Store and Inglewood’s Deli’s Continental.

Owners Harriet Roxburgh and chef Harry Peasnell (an Andrew McConnell alumni) have transformed the heritage-listed Imperial Chambers on the corner of Leake and Market streets into an airy space with whitewashed walls and blond timber. There’s a handsome terrazzo marble bench at the front, and custom-made furniture by Perth-via Adelaide designers Remington Matters throughout the space. A deli-style light-box menu gives the space a playful vibe.

The size of the open kitchen speaks to a serious commitment to DIY. In it are two shiny ovens that bake Peggy’s two house breads: a white-sesame-seed sub (like a Bakers Delight roll, but better) and a 48-hour focaccia-Turkish-bread hybrid that supports rather than swamp the fillings.

In the morning, you can hook into a four-cheese toastie ramped up with kimchi salt or Peggy’s homage to the Sausage McMuffin. The five-item core menu kicks in later, which might feature a Cubano spiked with mojo spice (chilli, garlic and coriander), a house take on the continental roll, and a chicken-schnitzel sub. For vegetarians, options might range from an egg-salad number to a fried-eggplant-and-sugo parm.

Golden chips are served through the day and are dusted with chicken salt and served with a Southern-style “comeback” sauce. To drink, there’s coffee by Perth roaster Community joining a tight selection of soft drinks.