Expect a tight edit of small plates and shared dishes (think a riff on the Thai fish and beef curry ki lek using Australian smoked eel and grilled short rib, and dishes that sub in native berries and saltbush for Sichuan peppercorns and cassia leaves), plus Negronis on tap. Will Meyrick might have been born in Portugal to English and Scottish parents, but the chef feels more at home in Asia than he does in Europe.

He has lived and worked in Indonesia for almost 20 years. His wife is Indonesian (with whom he has three children) and he can speak Bahasa. Breakfast in the Meyrick household is Indomie (instant noodles) with bacon and a fried egg. He is also chef-owner of Balinese restaurants Sarong and Mama San (as well as others): popular establishments that serve Meyrick’s take on the Asian cuisines he would seek out while travelling throughout the region. Or at least they did till Covid-19 forced Meyrick to mothball his restaurants early last year. (Mama San has since reopened).

Faced with the prospect of not being able to earn a living in Bali, Meyrick and his family relocated to Perth where Meyrick consulted to Lontana, the in-house restaurant at Samphire Rottnest. In addition to a source of income, the gig also gave Meyrick the opportunity to get to know the current Perth dining climate. Now that he’s finished up his contract with Lontana, Meyrick can focus on his next project: a new 120-person bar and restaurant sharing his discoveries from his extensive travels through Asia.

“It’s like having a travel diary and using the plate as your notepad,” says Meyrick, who's also racked up time at Sydney modern-Asian restaurants, Longrain and Jimmy Liks. “Over the past two years, we’ve been up to Assam and Nagaland in India, studied the food culture in Calcutta, gone up to the Zagora desert in Morocco, trying to find the common thread between tribes. When you go along the Spice Route or the Gunpowder Trade Route, spices and ingredients would move but the recipes wouldn’t necessarily move. It’s what tribes did with those ingredients that moved cuisine through food cultures.”

The menu for the as-yet-unnamed restaurant at the former La Vida Urbana site in Leederville is still being written, but Meyrick says guests can expect a menu of 18-ish share dishes prefaced by a selection of bar-friendly snacks. Think a riff on the Thai fish and beef curry ki lek, given an Antipodean twist with Australian smoked eel and grilled short rib. Or dishes that use native berries and saltbush in lieu of Sichuan peppercorns and cassia leaves respectively. While Meyrick says the menu will focus on Indigenous, regional dishes, the Australian focus doesn’t necessarily mean indigenous Australian ingredients, but rather what’s available from across the country.

“There’s this great opportunity to really enhance what we’ve got here in Australia without it being fusion,” says Meyrick. “There’s so much – how do I say – fast-food Asian. [This will] try and create something that is a little bit more sophisticated that balances both the Australian ingredients and the Asian recipes.”

The restaurant’s design references the Australian landscape via splashes of rusty orange, sandstone walls, dried flowers and a sleek contemporary design featuring banquettes, a sprawling bar and the theatre of an open kitchen. The 120-person capacity will be split 60/60 between a dining room and a no-reservations bar, allowing guests to use the space as they like.

Following the lead of many of Meyrick’s Indonesian restaurants, cocktails (including Negronis on tap) will be a key component of the drinks list, although there will be a stronger focus on (spice-sympathetic) wines.

Will Meyrick’s as-yet-unnamed restaurant is slated to open at 228 Carr Place, Leederville in August. 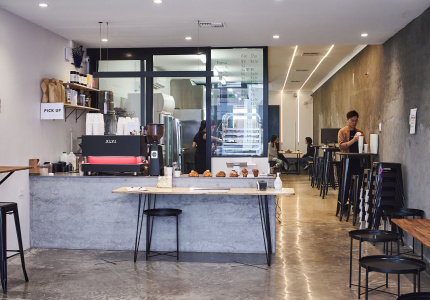