“We’re Just Trying to Break Even to Pay Our Staff”: Scenes From the Frontlines of Perth’s Collapsing Restaurant Industry

Guests, staff, the economy – Perth restaurateurs talk about the delicate balancing act of staying open during the coronavirus pandemic. 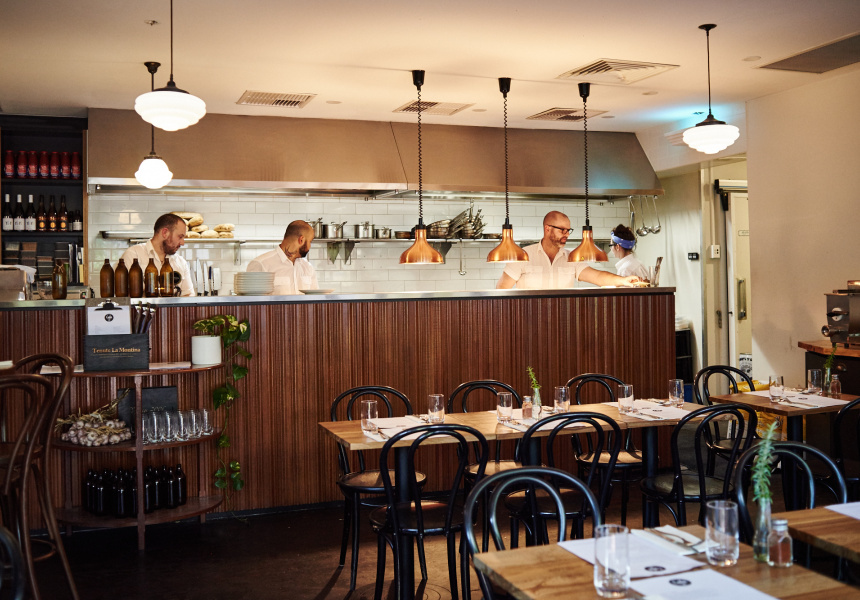 The coronavirus pandemic is rousing all sorts of emotions, but none so vivid as uncertainty. There’s been much talk of using isolation to “flatten the curve” – that is, slow the infection rate to prevent overwhelming the healthcare system. Great. But how much should we be isolating? Officially the government is okay with groups of up to 100 people gathering indoors. It’s yet to institute the kind of federal lockdowns happening in Europe, Asia and the US, where entire populations are in mandatory self-isolation and all restaurants and other public spaces are closed.

In Australia, public opinion is fractured. Broadsheet’s 12 editors have been working from home since Tuesday, but even within this small group, there’s no consensus about isolation. On Wednesday night, two editors went out for dinner (separately) to support a hospitality industry facing its biggest existential threat ever. Another editor, who comes from a family of doctors and has immuno-compromised family members, is opposed to any non-essential person-to-person contact, such as picking up takeaway from a restaurant. The rest of us are somewhere in the middle.

Though we could probably learn something from Singapore’s swift response to the virus, it’s impossible to say exactly who or what is right. And the situation gets particularly knotty when you think that 700,000 hospitality workers rely on the rest of us not staying home. Our takeaway coffee, our round of beers, our gigs, our dinners – that’s their groceries, their rent, their livelihood.

“It’s a hustle every day,” says Joel Valvasori-Pereza of Subiaco Italian restaurant Lulu La Delizia. After a typically strong week of trading last week, the combination of new government health regulations – fewer tables in venues, more space between diners – and coronavirus-related uncertainty led to a sharp drop in this week’s numbers. He and Ivana – Valvasori-Pereza’s wife and the restaurant’s co-owner – are, like many small business owners affected by the pandemic, rethinking their business model, but for now the doors remain open.

“You know restaurants are going to be half full, so if you’re practising good hygiene practices, it’s not that dangerous out there,” he says.

While the Valvasori-Perezas, naturally, continue to look out for their customers – they’ve added more al fresco seating outside the restaurant – they’re equally concerned about other members of the family: their employees.

“If anyone loses a job now, they’re not picking up a job,” says Joel. “There are going to be very few jobs available for anyone. You’re not going to make a profit in this period, but if you can keep some people employed and happy, that’s the best you can do.”

Sarah and Liam Atkinson, the husband-and-wife owners of eight-month-old Beaufort Street neo-bistro Le Rebelle, are in a similar boat as the Valvasori-Perezas.

“We’re just trying to break even to pay our staff,” says Liam. “Our goal is not to make anyone in our company redundant. We want to stem the flow and make sure we help each other. We’ll trade till the last minute we possibly can.”

Like many, the Atkinsons are tackling the situation on the front foot. Rosters are being shuffled to help protect as many jobs as possible. The menu is being tweaked to be a little less “chef-y”: enter stage left comfort dishes such as lamb pies and other things that “make people feel good about themselves”. Just as team Le Rebelle is changing its thinking, diners wanting to support the industry can follow suit. “For guests concerned about other people, come see us at off-peak times,” says Liam. “Come in and have an early dinner at four o’clock, or come and have a late snack. We cook till 11 at night so we’ll be there for you. Rather than completely locking it out, just don’t come at 7.30pm when everyone else wants to come.”

The pandemic is having an equally devastating effect – if not more so – on larger-scale hospitality groups. George Kailis, managing director of the Kailis Hospitality Group, oversees five different seaside venues – including Kailis Fish Market Cafe, Island Market and The Shorehouse – with capacity for more than a thousand guests between them. The situation has, understandably, affected everyone in the organisation.

“We’ve been managing our businesses, literally, hour by hour,” he says. “It’s not about profitability now. It’s about [maintaining] an operational business that can employ people and service a community that wants to go out. We have to be morally responsible. It’d be totally inappropriate to have busy venues with all these people in them while all this is going on.”

While Kailis describes the situation as “trying to catch a falling knife”, he’s also mindful that everyone is trying to do their best under extraordinary circumstances. Kindness, he maintains, will be key to everyone getting through the situation.

“We’re all in the same boat,” says Kailis. “From politicians to hospitality operators to retail workers, we’re all in the same boat. As frustrating as it can be at times, I don’t think you can sit back and be too critical of anyone in this situation. This is once-in-a-generation stuff. Everyone’s trying to do the best they can.”