The state’s biggest black-truffle celebration returns to Manjimup in June. Accessibility, variety and outright deliciousness: you’ll find all three in the line-up for this year’s Truffle Kerfuffle (TK), Manjimup’s annual celebration of the rare and exotic tuber. There are free attractions, such as cooking demonstrations and talks from local farmers. Ticketed events include intimate fire-cooking classes, dinners and truffle hunts. The only challenge? Fitting it all in.

We’re expecting the Feast and Fire opening night party (June 24) to be one of the first to fill. A casual stand-up event with live music and Southern Forests wines, the event features Duncan Welgemoed from Adelaide’s Africola team, and Paul Iskov from native food pop-up, Fervor. They will cook a distinctly Australian ‘barbie using fire and coals.

James Viles, chef-owner of Biota Dining in Bowral, New South Wales, is another interstater making his TK debut. On the Saturday night (June 25), he’ll team up with local-produce champion Kiren Mainwaring from Co-op Dining for the From The Earth Truffle degustation.

Although TK festival director Max Brearley is excited about the names on this year’s line-up - David Coomer (Fuyu), Sophie Zalokar (Foragers) and Aaron Carr (Vasse Felix) are some of the other locals on the bill - he insists restaurants are only part of the story.

Truffle Kerfuffle runs from June 24–26 at Fonty’s Pool, Manjimup. Weekend festival passes start at $20 and include entry to the marketplace, Truffle Tent, Stories of the Southern Forests and other attractions. The full festival program and new website are being launched on April 19. Event tickets go on sale April 21. 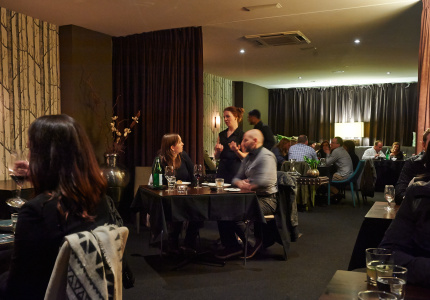