Three New Fremantle Bars (and One Sandwich Shop) to Try

The port city is booming, again. Hit its heritage streets to find a wine-centric small bar in a restored cottage, a waterfront venue with comforting Mediterranean cooking, and a funhouse of vintage video games and XXL pizza. Plus, a new-wave sandwich bar slinging conti rolls, chicken-schnitty subs and an ode to the Sausage McMuffin. From behind, this East Freo spot looks like a heap of shed. Which is exactly the effect that owner Miles Hull was going for. “The idea is to just be a really low-key shack on the water,” says Hull, a hospitality veteran whose track record includes Little Creatures and Alex Hotel, among many others. Once guests enter the galvanised “shack”, the under-promise-over-deliver begins, starting with the interior's cool, timeless look. Although Hull has drawn plenty of inspiration from low-key beachside eateries – our man cites a caravan in the Ionian Islands and Cottesloe’s legendary Van Eileen as two particularly influential memories – he’s pitching Jetty’s food and drink offering a little higher. Greek wines are a particular focus of the cellar while the mixed drinks keep things summery, light and Italianate.

Chef Marcello Segalina – once upon a time of Bistro Guillaume in Sydney – has written a similarly beachy menu that runs from house taramasalata and squid with ’nduja butter to fried school prawns and grilled sardines. A vertical rotisserie will supply chicken kebabs spiced with paprika and orange juice. Although the Mediterranean Sea is a recurring theme at Jetty, management hopes the project makes people rethink the Swan River. “Perth is lacking quality venues on the water,” says Hull. “You’ve got a few touristy cases which are great for views, but ultimately, it has to be about the quality of food and drinks.”

This much anticipated spin-off from the Foxtrot Unicorn crew, is a serious contender for the title of Freo’s best place to drink wine. If you’ve ever wondered what a 300-bottle wine list looks like in the flesh, wonder no more. Bottles are everywhere inside the former Mister Finch site. Chubby bottles of pet-nat sit broad shoulder to broad shoulder on shelving above a handsome dark timber table. Magnums are attractively arranged around a fireplace. Half-litre bottles from cult northern Italian producer Radikon – a benchmark for skin-contact, orange winemaking – elicit low whistles. In short, the wine is as much a design feature of Nieuw Ruin as the framed interwar real estate maps, vintage crockery and other ephemera that beautify this transformed, welcoming cottage.

While wine is the focus, cocktails are, as you’d expect, another focal point, as is the food. There’s an appealing English vibe to the menu which features crumbed pig’s head with mustard, rabbit and pork pie, curried fries and Eccles cake to finish, but it’s not all St John-by-numbers. There’s also crisps with tarama and smoked trout caviar; sourdough flatbread partnered with a laver butter; devilled duck livers; and salted monkfish “under a fur coat” – the colloquial name of the Russian and Eastern European dish shuba that features herring, beetroot, vegetables and mayonnaise. (The vegetables, when arranged over the fish, look like a fur coat).

It’s an excellent time to be a sandwich lover out west. The newest reason for sandwich fanciers to get excited: Peggy’s, a Fremantle sandwich spot with an Andrew McConnell alum in the kitchen, that opened in early August. Owner-chef Harry Peasnell has invested in two shiny new ovens so he can bake Peggy’s two breads in-house: a white-sesame-seed sub (“kind of like Bakers Delight, but just a bit better”) and a 48-hour sourdough-focaccia-Turkish-bread hybrid that’s there to support rather than swamp the fillings.

The opening menu reflects our man’s diverse sandwich tastes, as well as his interest in Melbourne’s new-wave sandwich culture championed by venues such as Hector’s Deli and Falco Bakery. In the morning, guests can hook into a four-cheese toastie ramped up with kimchi salt or Peggy’s homage to the Sausage McMuffin. From 10am, the five-item core menu kicks in, featuring a Cubano spiked with mojo spice, Peggy’s take on the continental roll, plus a chicken-schnitzel sub. Vegetarian guests can get stuck into an egg-salad number as well as a fried-eggplant-and-spicy-sugo parm, both served on focaccia.

Although in-house seating is available – Peggy’s is being pitched primarily as a takeaway venue, although that might change once the kitchen starts introducing evening trade and adds small plates, beer and wine to the offering. For now, coffee from Community Coffee and soft drinks make up the beverage choices until Peggy’s licence gets approved.

First there was the original Palace Arcade on Beaufort Street, a split-level house of vintage video games, great drinks and XXL pizza. Then came the Victoria Park outpost, an expansion that brought Palace Arcade’s winning formula to an airy space on Albany Highway. Earlier this year, the family welcomed venue three with the opening of Palace Arcade Fremantle next door to the National Hotel. And while Freo has no shortage of the things that made the Northbridge and Vic Park venues great, fans will notice an important new addition: space.

The former Lapa Fremantle has been transformed into a cavernous warehouse of ’80s and ’90s nostalgia complete with bright Tron-style neon. While there might be fewer arcade cabinets than at other venues, the selection here is all killer and no filler with classics such as Street Fighter II, Time Crisis and Teenage Mutant Ninja Turtles all present and accounted for. There is also a four-person Sega Rally. The pinball machines are all contained in the Apres Bar, an alpine-themed space complete with taxidermy and snow equipment that doubles as a private function room.

The initial food and drink closely follows the previous Palace Arcade scripts: plus-sized New York-style pizzas available by the slice or in 16-inch or 22-inch pies; easy-going cocktails, wines and beers; and an impressive stockpile of booze on the back-bar. There are also plans to expand the menu to include lighter, less calorific options alongside the fried stuff. 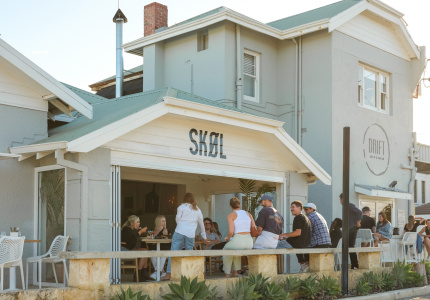