Suku, an Indonesian Food Stall Modelled on the Neighbourhood Eateries of Bali, Opens at Fomo Freo

The compact, thoughtful menu features Balinese dishes and drinks the owners grew up with, as well as a handful of Indonesian comfort classics including a sweet black rice pudding, fried chicken with a fiery salad, and mackerel dumplings. When Ria Zulkarnaen and Nick Mailenzun moved to Perth in 2013, the couple missed the food they grew up eating in Bali. As the story so often goes, they set about recreating it themselves, bolstering their skills by enrolling in cooking classes and buying Indonesian cookbooks whenever they returned home for visits.

But unlike most homesick ex-pats, Zulkarnaen and Mailenzun turned their passion into a job and, in 2019, opened a small stall at the Fremantle Markets. (In a cool twist of fate, the couple were just a short stroll from Tony Darwinto of Fluffy Lamb, another Indonesian cook turning heads for his boldly flavoured, charcoal cooking). The stall’s name was Suku, an Indonesian – as well as Finnish – word touching on the concepts of family, tribe and community. In addition to being a pair of strong, good-sounding syllables, the choice of name was also a statement of intent.

“We called it Suku because we wanted to cook Indonesian food and all the things we grew up eating as kids, not just Balinese food,” says Mailenzun, who was born in Victoria to a Balinese father and moved to Bali at age three. (Zulkarnaen was born and raised in Bali.).

Earlier this year, team Suku announced it was moving out of the markets to resurface at Fomo Freo, the ambitious new development in the former Myer Fremantle building at Walyalup Koort (formerly Kings Square). This weekend, Zulkarnaen and Mailenzun get the chance to cook for guests again, as Suku and the rest of the tenants at Fomo Freo’s Street Alley precinct open for business.

Designed in conjunction with Fremantle-based design studio Work.Shop.Dine, Suku 2.0 is an airy, colourful space that mirrors the cheery nature of its owners. Small tables made with wood salvaged from former Javanese fishing boats surround the semi-open kitchen. A larger six-person communal table is on hand for larger parties, while bar seats are pitched at solo diners. Though the look of the space is unquestionably modern, the feel is very reminiscent of a warung – a small Indonesian neighbourhood Indonesian eatery. The menu stays faithful to warung traditions and features a clutch of core dishes that suggest Suku aims for quality rather than quantity.

As it was at the OG space, the nasi Bali – a celebration of chicken that includes hand-pulled chicken (ayam sisit), crisp chicken skin and the island’s famous grilled skewers of chicken mince and lemongrass, known as satay lilit – will be Suku’s calling card. Gado -gado, Java’s famous vegetable and peanut sauce dish, will also be available, as will deep-fried tempeh. Weekly specials will also be part of Suku’s offering, with batagor (fried mackerel dumplings) and lalapan (a fiery raw vegetable and chilli sambal dish from the island of Sunda Islands, often served with fried chicken) among the dishes guests can look forward to trying. In short: the Suku menu is digging a little deeper than nasi goreng.

“We’re trying to showcase that food in Bali is so much more than babi guling or mee goreng,” says Zulkarnaen.

Drinks-wise, guests can expect Balinese beer (Bintang, naturally) and arak, the island’s potent white spirit. Soda gembira (“happy soda” – a combination of sparkling water, condensed milk and syrup) will also be available, as will a selection of sweets, including a sweet black-rice pudding. 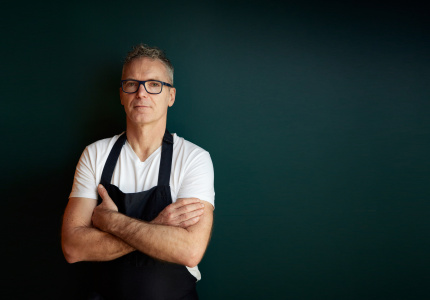