Time your visit right and you’ll be able to drink milk fresh from the morning run to the dairy farmer. 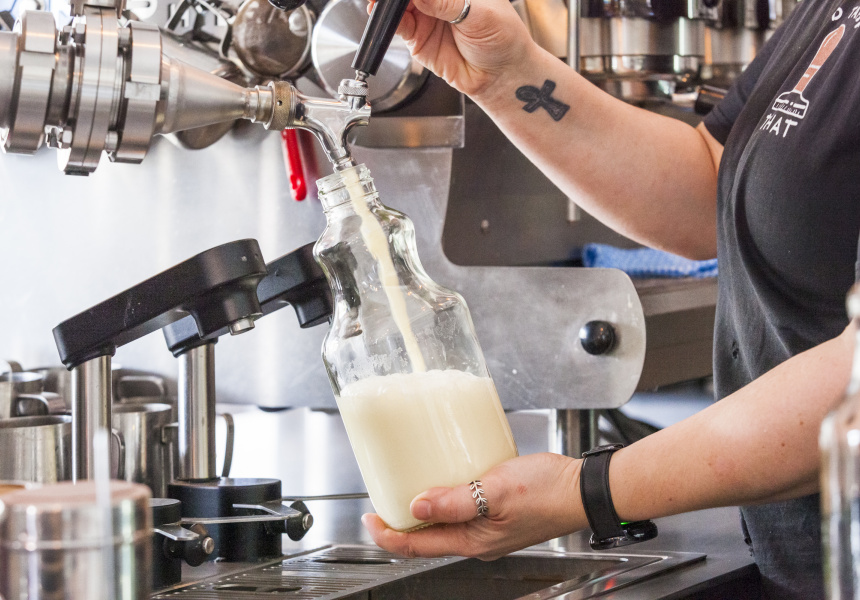 When was the last time you got excited about drinking a glass of milk? For me, it was yesterday. Creamy, rounded, sweet and glossy, the milk in question was packed with flavour and nostalgia, not least because it came in a glass bottle bought at a corner-store cafe. It was shockingly good; a reminder of how great – and seasonal – milk can be. Later that night, I excitedly poured a glass for my girlfriend, eager to share with her my newest food discovery, and I proclaimed the milk to be the best in Perth.

Yes, I’ve tried Grumpy Farmer; Sunnydale; that really creamy Bannister Downs number; the Community Co milk you can sometimes get at the fancier IGAs; the Geo Organics milk sold at the Margaret River Farmers’ Market (and I lament the fact that you can’t get regular supply in Perth) – they’re all excellent and a wonderful reminder that great dairy is a thing of beauty, but if I had to choose one WA milk to spend the rest of my life with, this would be it.

Does it seem fair – or even possible – that Perth’s best milk is sold at a bakery-cafe ? It is when you consider the effort that the crew at Dejaxo in Mount Hawthorn have made to uphold its commitment to a no-plastic milk supply. (Dejaxo also bakes terrific breads and cakes, but that’s a discussion for another time). Prior to the arrival of the cafe’s custom-made 100-litre milk vat in early July from Italy, owners Kate and Damein Nabbs spent more than a year researching the equipment, obtaining permits from the health department, and – most crucially – finding a dairy that could supply them. (Most dairy farmers are under contract to supply milk to a major processor). Fortunately, they found a farmer in the south-west tending a single-herd of Guernsey cows, a breed of cattle known for its rich, high-fat milk.

The commitment to getting this milk from the south-west to Perth is equally remarkable. On Tuesday and Friday mornings, Dejaxo dairy manager Reinhard Vanspeybrock wakes before dawn, drives down to the farm an hours drive away, picks up that morning’s milk, drives it back to Perth and pasteurises it at Dejaxo’s dairy in Malaga. He then brings the milk to Dejaxo’s Mount Hawthorn cafe in 20-litre vats and pours it into the milk vat that is mounted on the counter. Time your visit right on a Tuesday or Friday and it’s possible to taste milk fresh from the morning’s run. (It’s worth the effort).

Good taste aside, the other big tick for Dejaxo’s system is that it allows customers to not only buy staggeringly fresh milk in glass to take home ($4.50 for a one-litre bottle), it also allows them to reuse these glass bottles – a massive plus for a state without its own glass recycling plant. Customers can choose to reuse bottles as part of a bottle-swap system ($3.80 for a one-litre bottle when they do a return) or by refilling clean, sterilised bottles ($3 for a one-litre refill). While it’s not quite the (raw) milk vending machine system found throughout Europe and New Zealand, it’s a win on so many levels.

“This is how milk should be,” says Vanspeybrock, a Belgian who grew up with good milk and worked for another Perth dairy before joining Dejaxo. As well as gathering the milk, he also oversees the group’s gelato and yoghurt production.

Between baking, gelato, yoghurt and coffee-making, Dejaxo goes through 1000 litres of milk each week. Picture that quantity as two-litre plastic bottles, and the waste-reduction impact of this system really hits home. (Vanspeybrock: “Imagine how many places there are in Perth and how many [plastic] bottles go in the bin every day. It’s no good. We can’t keep doing it.”)

But beyond the system’s environmental benefits, there are more direct benefits in terms of flavour and coffee. An agitator inside the vat constantly stirs the milk, ensuring the cream is evenly dispersed throughout. According to cafe manager Jesika Truran, this makes for creamier milk coffees – plus an easier-to-clean vat. Having milk on tap means staff can make coffees faster and with less waste compared to the previous sensor-system used for dispensing milk. And retail milk sales provide the cafe with an additional revenue stream. Admittedly, establishing and implementing the system has involved plenty of trial and error, but the effort has been worthwhile.

“If you do things just for convenience, you’re never going to make a difference and you’re never going to take that next step dealing with environmental wastage,” says Truran. “Even if it’s going to be a little bit more difficult than what we’re used to, it’s worth trying. We tried it, we gave it a crack and I don’t think we’re going to go back now.”