After almost 14 years, the husband-and-wife owners call time on their singular restaurant. On Monday May 18, the WA government will ease restrictions on restaurants, cafes and bars across the state, permitting up to 20 guests at a time. But South Perth fine diner Red Cabbage will not be among the venues reopening.

Husband-and-wife duo Scott and Hazel O’Sullivan made the difficult decision to close their restaurant permanently following the mandatory shutdown on March 23. Their main reason for shutting up shop, says Scott, is an uncooperative landlord not willing to come to the party with rent reduction during the restaurant’s closure. Red Cabbage was due to celebrate its 14th birthday at the end of May – a milestone the O’Sullivans couldn’t have anticipated in 2007, when they didn’t think they’d make it past year one.

“The first year [2007] was absolutely horrible” says Scott. (He was the chef, Hazel was the manager, and they were the only partners in the restaurant.) “We got married in April 2008 and didn’t think we’d be open after we came back from the honeymoon because it was that quiet and dead. But you keep moving forward and things started happening.”

His memories of the last 14 years under an office block in South Perth are a mix of highs and lows. The quiet nights at the start. The unexpectedly busy nights (early in the piece, Hazel had to look after 25 diners one evening on her own). The inability to leave work at work (“Every holiday for nearly 14 years, we took the iPad with us so we could pay wages and make sure taxes were up to date”). The value of the timeless husband-and-wife model in hospitality circles. (“The front of house is always respected by the back of house and vice versa. Everybody cares,” he says.)

Although Red Cabbage enjoyed media attention and accolades over the years, it’s the customer support that meant the most to the O’Sullivans.

“Being able to last as long as we did, that means more than anything,” says Scott. “When we announced we were closing down due to Covid-19, we got nearly 100 personally written emails within 24 hours from people saying they’d be there when we reopen. I couldn’t believe it. Some of them were pages long. That was sweet and nice. We kept them all.”

Red Cabbage opened on May 27, 2007 on the site of the old Reflections restaurant, beneath a somewhat drab office block overlooking a picturesque Mitchell Freeway on-ramp. Scott was just 30, Hazel 22. The couple had met at Halo, the Swan River foreshore fine diner owned by Paul, Lynn and Ed Wolkowinski (who now run Heritage Wine Bar in the CBD). Their ambitions were simple: to run their own business and, as Scott puts it, “to do good food”. Although the restaurant established itself as one of the city’s better degustation dining options, offering a set menu wasn’t part of the plan in the beginning.

Whereas many restaurants nowadays come out the box with their “concept” fully realised, Red Cabbage – or at least its food – was constantly in flux. The restaurant opened with a polished mod-Oz menu, similar to what O’Sullivan had cooked with chef Adam Sayles across the river while at Halo. Those that dined at the restaurant during its early years will remember red cabbage being a decorative feature on plates.

The chefs’ British sensibilities slowly revealed themselves in playful riffs on English go-tos, such as steak and eggs (their version had venison, two dainty fried quail eggs and brioche toast); note-perfect suet puddings; and sweets such as treacle tarts and roly-polys. Though the chefs’ heritage was a feature of the menu, Asian influences were present early on too, whether it was a salad of pork belly and pressed watermelon with black-bean dressing, tempura-fried oysters or teriyaki sirloin. (Scott says Japanese charcoal grilling is his favourite way to cook proteins.) Native ingredients such as Illawarra plum, kangaroo and saltbush also crept into the mix. And art and cool Fornasetti wallpaper added colour and personality to the room. Despite the kitchen’s bowerbird approach to dining, exacting technique was a constant, as was Scott's curiosity.

“We were very excited about food,” he says. “I was a pain in the arse the whole time trying to do new stuff every year. We did evolve a lot which is why I think customers got excited to come back again and again to see what we were doing.”

Although the closure of Red Cabbage will be a blow to Perth’s dining scene, Scott isn’t planning on leaving the industry. “Everybody says it, but I’ll always be in hospitality,” he says. (He’s recently started working in recipe development for another food business, and Hazel has spent the last year and a half working in mental-health services.) “We’ll see what happens over the next couple of years. There are a couple of ideas in my head to do things with other people, but my main priority right now is saying goodbye to Red Cabbage and thanking everybody.” 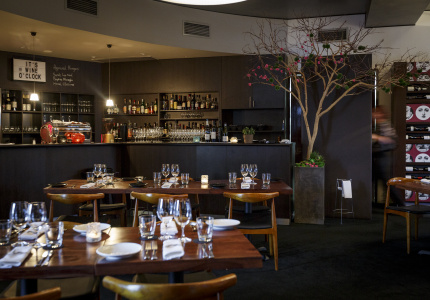