“I’ve always been in love with dim sum, and beer has been a curiosity of mine for a long time,” says Chin, who also owns Noodle Forum and Ramen Boy. “The idea to combine the two concepts together, as crazy as it sounds, was a natural thing for me.”

Chin says he was lucky to engage two creative chefs with a knack for combining unlikely flavour combinations (“Both of them are completely bonkers and hate cooking the same thing twice,” he says). The menu, though, is still grounded in dim sum tradition, as evinced by the offer of traditional ingredients such as chicken feet and tripe.

As the restaurant’s name would suggest, beer forms a substantial part of Shy John’s offering. It was originally intended there would be a brewery on-site, but things didn’t go to plan.

“Two months into the plans being drawn and equipment being manufactured, the structural engineer came back and said that we would punch a hole through the floor onto the train tracks,” says Chin.

Chin hopes to find an alternative site for a new brewery within the next 12 months and will be working with Singapore microbrewery Red Dot Brew House. Meanwhile, customers can still enjoy craft beers (brewed, for now, in Melbourne) and a selection of house cocktails.

This article first appeared on Broadsheet on September 18, 2018. Menu items may have changed since publication. 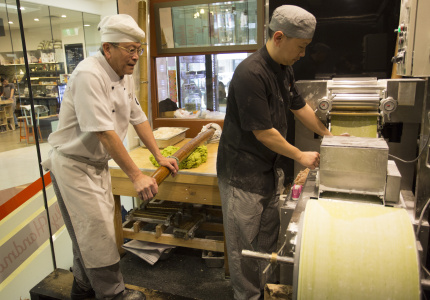