It’s goodbye Blue Flamingo and hello to a breezy, all-day diner with more than a touch of State Buildings DNA. 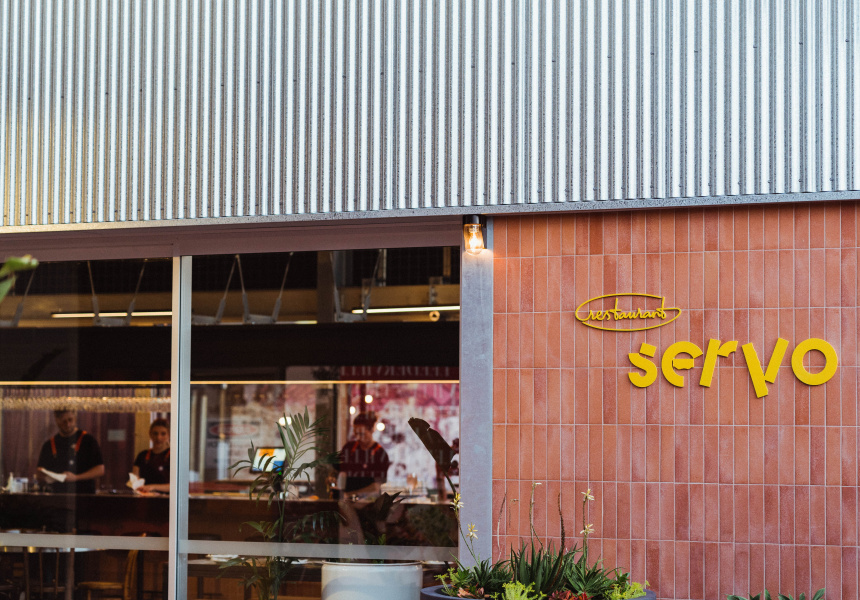 Taking over the former Blue Flamingo space, Servo is a 90-person diner that seemingly sprang up in a month. A giant black girder studded with wine glasses hovers over the bar. Bi-fold windows blur the lines between indoors and the streetscape of buzzy Electric Lane. Metal grills beautify the room. Despite the raw, industrial aesthetic, there’s also a casual, easygoing energy underscoring the space as well as the menu.

The carte is a freewheeling deep dive into flavour, swinging from raw fish teamed with yuzu, pomelo and puffed green rice to fried chicken with garlic cucumbers and various shish skewers (pork belly, Wagyu, chicken) grilled over a Japanese konro grill. While the dinner menu is a sprawling affair designed for all-in, shared eating, the menu at lunchtime is shorter and has been written with lighter, brighter daytime eating in mind. (A changing array of salads – when Broadsheet visits, the selection includes cucumber, tabouli and feta; eggplant and bread; and orzo, zucchini and mint – lines the counter of the open kitchen). The idea, says head chef Michael Antonievich, is to create a versatile eating and drinking experience.

“No limits was the idea,” says Antonievich, a kitchen veteran who’s cooked across Perth as well as at Sydney’s Bennelong and throughout London. “It’s very important for the menu not to be typecast or looked at as one style of cuisine. The idea is that it’s everything and can play on anything, as long as it doesn’t come across as confused.”

Although Antonievich is overseeing the kitchen, the opening menu is a group effort involving the precinct’s executive chef Damien Young and Jesse Blake (Petition Kitchen, Eye Heart Rabbit). Blake is one of many key State Buildings staff members lending their know-how to the project. Gun sommelier Emma Farrelly is behind the clipped, fun wine list; and cocktail whiz Eoin Kenny has assembled a neat drinks list, including thoughtful no-alcohol options such as a turmeric and mango lassi, and a peach and jalapeno highball.

While guests await the unveiling of the rest of the 2000-person Leederville Hotel redevelopment, more immediate spin-offs will include the al fresco Servo Yard Bar, as well as Servo Kebab, a late-night counter that will do exactly as it says on the box. Both are expected to be open by the start of October.