The straight-shooting lunch spot from chef Scott Bridger and Eamon Sullivan completes the duo’s transformation of their northern May Street Larder outpost. “Toasties. Everyone loves them. You just need to not overthink it.”

That’s what ex-Olympian Eamon Sullivan says of his and chef Scott Bridger’s new venture Sammy’s, a takeaway-focused coffee and sandwich bar at The Mezz, Mount Hawthorn. It’s the other piece of the puzzle in the pair’s transformation of their northern May Street Larder outpost, along with recently opened Middle Eastern eatery Pogo.

Sammy’s is a pivot for the seasoned operators, who, with venues Bib & Tucker, Goody Two’s and the original Fremantle May Street Larder under their belts, are more accustomed to larger operations.

“It was really us listening to the market,” says Sullivan. “Obviously as a brand, we are more restaurant focused, so doing something like Sammy’s was a little bit of a leap into the unknown for us. But over the last year with May Street Larder, we’d noticed two different types of customers: those who were loving the fried chicken, and those who were just having a coffee and a muffin. So the decision was to split the venue in two, and really own those categories, rather than trying to do everything in one.”

The brief for Sammy’s is simplicity. The menu is short and sweet, offering both grilled and fresh sandwiches as well as open, topped toasts, all made with Mary Street Bakery bread. Think spiced, roasted pumpkin with kale salad and house-made hummus; hot pastrami with mustard mayo, swiss cheese and pickles between fluffy white bread; and toast topped with hummus, ribbons of pickles, smoked almonds and mint.

Rounding out the menu are Mary Street Bakery doughnuts, Ox Rabbit cakes, healthy treats from Raw by Chris and brews by Campos Coffee.

“We decided to just be really unapologetic about doing simple food at a decent price. It’s all about convenience here. We wanted to find a balance: find good ingredients … keep it price-point relative and make it approachable for everyone.”

With a large takeaway coffee window that opens out to the internal deck of The Mezz and only a bar, a booth, and a couple of tables inside, the focus is on getting in and out. That said, it’s a relaxed and inviting space, with a crisp blue and white colour palette, and a touch of greenery. Like Pogo next door, Sammy’s is the product of graphic design and branding by Two From Two, brought to life by stylist (and Broadsheet contributor) Clare Ryan.

While simplicity will remain key, Sullivan says diners can expect to see some chef’s touches creep onto the menu once things find their rhythm.

“Now that both venues are open, we can work on refining both concepts,” he says. “We will start introducing a sandwich of the month, for example. But we wanted to start by nailing the basics and getting the concept right.” 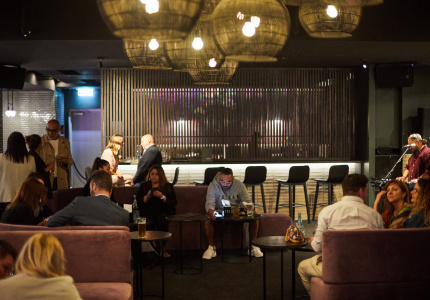 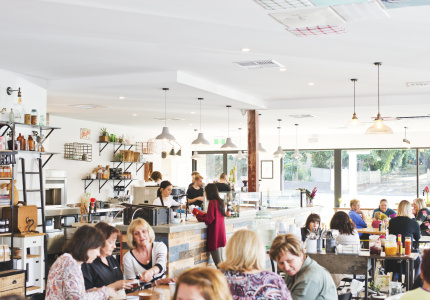