When RoyAl’s Chicken & Burgers opened in Vic Park, chef Alasdair Craigie was usually flying solo in the kitchen. A little over 12 months and a team of six later, the demand for RoyAl’s American-style burgers and Southern -fried chicken can make a table hard to come by. In what will be exciting news for many Perth diners, RoyAl’s is now opening its second restaurant.

Craigie, who owns RoyAl’s with brother Ken, says when choosing a second location, they decided against obvious areas like Leederville and Northbridge.

“We didn’t want to be in the usual spots where you’re mixed in with the rest,” he says. “We found this little place in Wembley and it just made sense. It’s not like Vic Park where you get a lot of foot traffic but it’s a good area close to the coast.”

The two locations will have the same menu as well as their own specials. Restaurant and kitchen managers from Vic Park will move to Wembley and will oversee both restaurants to ensure standards are maintained.

“Five years ago it was hard to get a decent burger and fried chicken wasn’t really a thing in Perth besides KFC,” says Craigie. “Now there’s a lot of places doing good things. You have to be really sharp and make sure you’re doing the best you can.”

The newly fitted-out Wembley restaurant is slightly bigger than Vic Park with seating for 50 diners. Despite pressures to expand, there’s no intention to relocate RoyAl’s first home.

“We’re still finding it too small a venue, but we just love that spot,” says Craigie.

Craigie teases that planning for the brothers’ next venture – their version of Filipino grilled chicken – is underway, but the immediate focus is on Wembley.

“Our mission statement is to create happiness with burgers and good service,” he says. 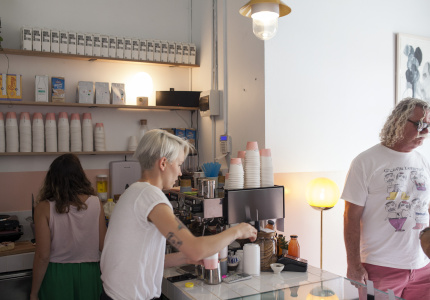