One To Try: Rockefeller on Beaufort Street

Highgate gets a New York-style deli. Beaufort Street’s newest opening is hard to miss: just look for the building with Rockefeller painted in white on its side. Occupying the shell of Highgate Drink and Dine, Rockefeller is chef Scott Alfonso (formerly Chophouse Perth) and business partner Michael Adonis’s tender ode to the Jewish delis of New York City.

“We’re trying to create an environment that exudes the sort of generosity you would feel if you went into someone’s home,” says Alfonso, who grew up in New York. “I want everybody to feel welcome here.”

The menu is exactly as you would expect. New York-sized sandwiches filled with house-made pastrami and corned beef. Potato latkes (fritters) with trout rillette. Smoked-ricotta blintzes with fruit compote. Stromboli from the wood-fired oven. And bagels, of course – five different types and four different schmears.

“We worked with our baker for a couple of months going back and forth, tweaking recipes,” says Alfonso. “The first time I had one of our sesame bagels with vegetable cream cheese, I felt like a kid again. I’m hoping I can strike the same sort of chord with people.”

Coffee is from Dukes, with a bottomless filtered brew – your choice of light or full-bodied roast. House made shrubs – flavoured vinegar-based syrups topped up with soda – offer a sour alternative to run-of-the-mill soft drinks. For something a little stronger, there’s beer from Brooklyn.

“You’re not going to find anyone else who spends five days making your pastrami on rye, or ferments 40 kilos of cabbage at a time so they can give you the best possible sauerkraut on your Reuben,” says Alfonso. “I have a 100-litre barrel of pickles in the back fermenting right now. I don’t know of anyone else doing that in Perth.” 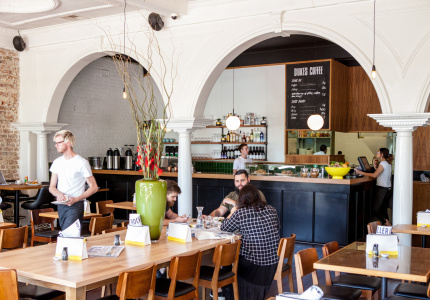