Meet the urban farmers using waste products to grow gourmet mushrooms that chefs around WA can’t get enough of. 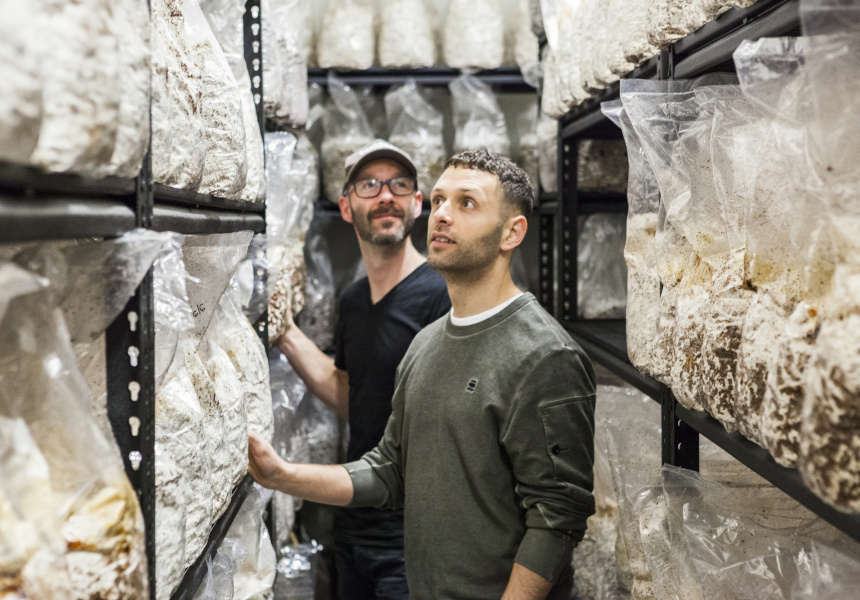 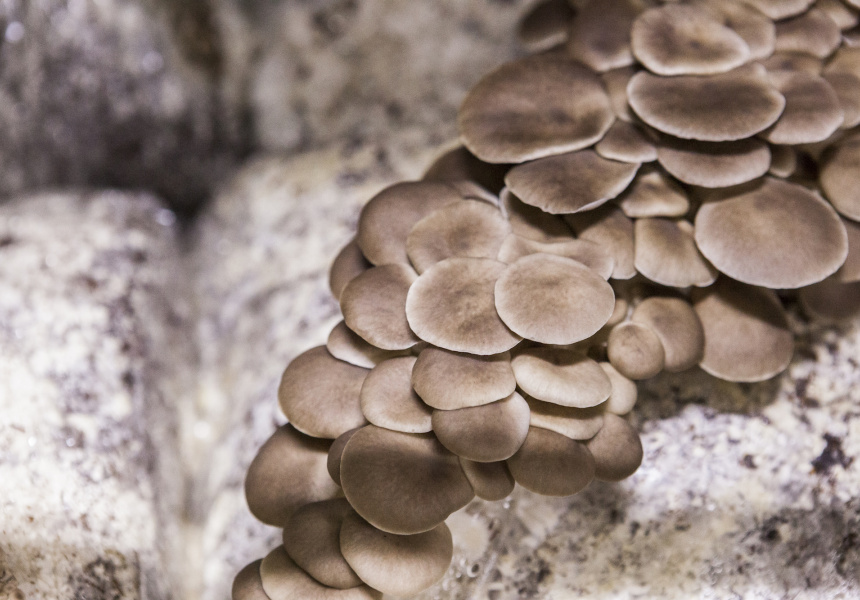 There are mushrooms, and then there are Mushroom Guys mushrooms.

Mushrooms such as pink and yellow oysters, a colourful tangle of bright, coral-like lobes. Or fresh shiitakes, a slow burn of earthy savour and second-wave forest floor funk. Or the lion’s mane, aka Mother Nature’s own edible pom-pom. From both a taste and texture perspective, these mushrooms are a cut above what you’ll find in most supermarket fruit and veg aisles.

Just as surprising as the qualities of these mushies is the setting in which they’re grown: an urban farm hidden in the lush surrounds of Kardinya’s industrial estate. Save for a doorbell with “The Mushroom Guys” scribbled beneath it in pen, the farm is unsignposted, unassuming and out of sight – much like its owners, Adrian Acquado and Derek Novak.

Although Acquado and Novak prefer to keep a low profile, their handiwork is front and centre at key West Australian restaurants including Lulu La Delizia, Young George, Fleur, Mummucc and Bib & Tucker, among (many) others. Considering the Mushroom Guys started trading in December 2018, this market cut through is impressive. Part of their success – at least if dish shots on Instagram are anything to go by – is offering customers something different. When was the last time you saw swordbelt mushrooms down at the shops? The other part of the equation: freshness. Mushrooms are harvested and delivered on the same day, sometimes even on the same day they’re ordered.

“It’s common to get [same-day orders by text] message at midnight and 1am,” says Acquado. “But that’s no problem. That’s the industry, and I wouldn’t have it any other way. I love working with passionate chefs.”

The farm itself is a series of temperature- and pressure-controlled rooms. Each five-kilo block of mushrooms begins life as a substrate: a combination of local jarrah sawdust and soybean hulls that are mixed twice a week in-house. This growing medium is then packed in plastic bags, sterilised in what’s best described as a substrate sauna, left to cool, then taken to a sterilised lab where they’re inoculated with mushroom spores and sealed. (Novak: “When it’s all running, sealed and positively pressured, it’s probably cleaner than a surgical room.”) From there, the bags of inoculated substrate go into a temperature-controlled incubation room where the mycelium – the part of the fungus that produces mushrooms – is allowed to develop and multiply before going into a humidity-controlled fruiting room where the mushrooms appear.

Of the 11 varieties grown by the Mushroom Guys, pink and yellow oysters are the fastest growing, ready in as little as a month. At the other end of the spectrum, shiitakes and chestnuts can take up to four months from start to finish – and this extended production time reflected in their price. (Maintaining the various rooms at the correct temperature, according to Acquado and Novak, is one of the bigger costs involved with running the farms).

Dig a little and you’ll find much to like about the story of the Mushroom Guys. No-waste advocates will be pleased to hear that the jarrah sawdust and soybean hull used to grow mushrooms are both by-products, and that the substrate, once harvested, is turned into compost. (Excess mushrooms, meanwhile, are donated to Ozharvest). The farm’s metropolitan address makes for a smaller carbon footprint when making deliveries, and there’s an endearing DIY aspect to the whole outfit – starting when the owners used the internet to teach themselves the fundamentals of mushroom farming. The duo also spent two months building the facilities. They assembled the flatpack coolrooms, hung the air conditioners and designed their urban farm from scratch. A 55-kilogram cement mixer is used to combine the substrate the mushrooms are grown in.

But the most compelling argument of all remains the mushrooms themselves. Although chefs around town might grill, roast and sauté the contents of their regular Mushroom Guys order, these mushrooms are delicious enough to eat raw, as is. To taste these shrooms straight off the growing block is to experience mushrooms anew.

In addition to supplying your mushroom fix to restaurants around town, the Mushroom Guys also sell fresh and dried mushrooms direct (pick-up and limited delivery are available). And mushroom growing blocks are available for budding fungiculturalists, with kits taken straight from the farm’s production line. 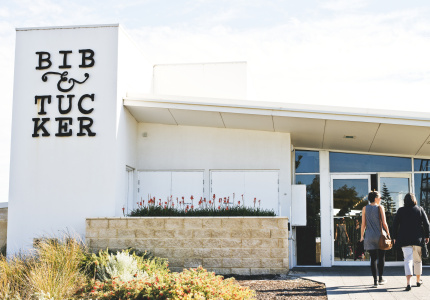