A turntable will play hip-hop and rock records, a vending machine will dispense tinnies of craft beer, and twin stone-base ovens will turn out, well, pretty good pizza. And yup, there’s going to be a ham and pineapple offering. 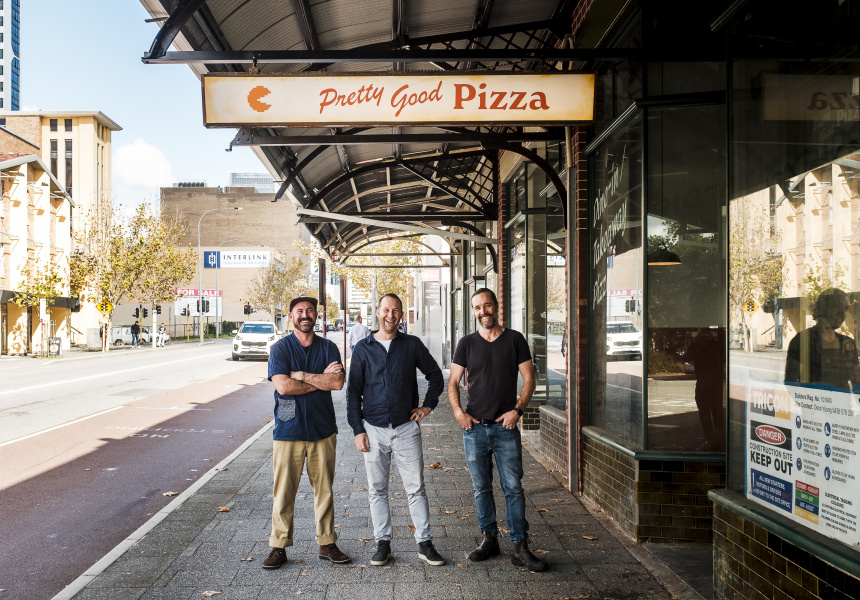 As a kid that grew up in Kalamunda in the ’80s, Miles Hull ate a lot of Matteo’s Pizza.

“My brother, dad and I would always order a meat lover’s or some sort of meat-heavy pizza,” says Hull. “Bacon, ham, bad pepperoni, olives.”

Taking over a 1903-built shopfront next to Ruinbar, Pretty Good Pizza is a compact affair that looks a lot like a takeaway pizza shop you’d find at the local shops. The shiny new kitchen, with its twin Morretti stone-based pizza ovens, occupies most of the space. A pair of vintage speakers and a turntable supply the vinyl-based soundtrack that goes big on hip-hop and rock. A Pac-Man-esque decal hugs one of the walls: a nod to ’80s video game nostalgia that happens to look like a pizza pie missing a slice.

A couple of benches and stools sit in the windows. Along with some milk crates out on the street, that’s pretty much the extent of your dine-in options. (Having said that, Pretty Good Pizza can also be accessed from the bar and via a standalone entrance on Beaufort Street, meaning guests can buy a pizza here and enjoy it at Ruinbar.) Another benefit of being a takeaway pizzeria attached to a bar is that customers can enjoy a drink with their food, and while it’s cooking. A vending machine will supply tinnies of craft beer and canned wines for this purpose, although customers can also bring in drinks purchased from the main bar.

The ‘za, meanwhile, has been developed by Marcello Segalina, head chef of Jetty and an avid pizza fan. According to Hull, the pizza will be crisp of base and thin of lip: something that’s closer to a New York- or Roman-style pie than the puffy, soupy Neapolitan pizzas.

“They [Naples-style pizzas] are great for dine-in, but you have to eat them straightaway when they’re hot, so they’re not as good takeaway,” says Hull.

The menu of 10-ish toppings keeps things classic with pizzas named after well-known hip-hop songs and albums. There’s a five-cheese pizza dubbed C.R.E.A.M. (we’re assuming, in this instance, it’s cheese rather than cash that rules everything around Miles). California Love is the codeword for the glorious wonder that is ham and pineapple. The 13-inch pizzas are sold whole and by the slice, with al taglio tray pizzas available for groups and functions.

Pretty Good Pizza is slated to open the first weekend of August.