A Potted History of Women in Bars

A not-so-fun fact: it wasn’t until 1970 that women in Queensland could drink in public bars. While society is finally catching up to the idea that bartending is an actual profession, we still have a long way to go before women gain the same level of respect working behind the bar as men. But women have played pivotal roles in the story of alcohol. Here in Perth, we have a strong female presence that is worth raising a glass to this International Women’s Day.

Historically, women have been both deified and persecuted for their relationship to alcohol. In ancient Mesopotamia, goddesses were believed to be the inventors of beer and helped sustain life and culture. By contrast, women and slaves in Rome could be executed for drinking wine. During the Middle Ages, ale wives who brewed beer were sometimes accused of witchcraft, whereas their male counterparts identified themselves as professional artisans. The fate of the woman was often exile. The man? Fame and fortune.

America has a particularly challenging history of women and alcohol. In the 1800s and early 1900s, some states forbade women to work in – let alone enter – saloons that served alcohol. Yet during Prohibition and World War II (while the men were away fighting), it became more socially acceptable for women to tend bars and drink in underground speakeasies. But when the men returned they wanted their jobs back, and were willing to fight another dirty battle. Groups were lobbied and laws were passed that dictated, quite literally, that bartending was a male profession. Women couldn’t tend bar because they were not “emotionally” or “temperamentally” suited for the job.

Things were slightly different across the pond in the UK. In early 20th-century London, women made up slightly less than half of the bartending workforce (in America, the figure was just 0.3 per cent). Among these was Ada “Coley” Coleman, arguably history’s best-known female bartender. “Coley” took up bartending at the age of 24 after her father died and was soon promoted to head bartender of the American Bar at the Savoy Hotel in 1903. Here she quickly developed a reputation for being a talented bartender – or “barmaid”, as they were then known – and hostess to the hotel’s notable and affluent clientele. According to cocktail historian Ted Hughes, “not only was Coley … a woman in the world of male bartenders, it was she who made the bar famous.” Her most famous cocktail is undoubtedly the Hanky Panky, a drink created for a comic actor named Charles Hawtrey when he requested something with “a bit of punch”.

It’s been far from smooth sailing for female bartenders down under. Till the late 1960s, purists called for ban on all barmaids – a symptom of sexualisation and discrimination in our drinking culture. On the topic of private bars being run by women, a correspondent in The Adelaide Advertiser reported in 1884 on “the fearful injury wrought young men, by the seductive influence of young and exquisitely dressed barmaids in the saloons and back bars of several Adelaide hotels”.

But, as in England, barmaids held a special place in the hearts of Australians. “Once they were legends,” writes Diane Kirkby in Barmaids: A History of Women's Work in Pubs. “They could make a pub, or break it. They could stop a fight, mend a broken heart, then pull another beer.” According to Kirkby, over the course of the 20th century the barmaid took on a cultural and political significance in Australian pub life that went beyond the economic importance of their work. Women may have been able to work in bars, but in some states, like Queensland, they were only permitted to drink in a separate “ladies lounge”.

On March 31, 1965, an iconic pub protest took place at Brisbane's Regatta hotel, where Mrs Thornton and Mrs Bogner chained themselves to the foot rail, demanding equal admission to the premises. Both received death threats and were accused of neglecting their children. Many male parliamentary leaders were horrified at the prospect of women in public bars, and Labor MP Harold Sandgate reportedly said “the prestige of womanhood is too high and too valuable and too precious to be destroyed by a vulgarism”. In March 1970, five years after that famous protest, a section of the Liquor Act was repealed, finally allowing women in Queensland the right to drink in a public bar.

1970 was a benchmark year in America too, as laws restricting the ability of women to work in bars were finally overturned. (It was also the year The Beatles released Let It Be. Yes, America, let women be damn bartenders.) As Dale DeGroff (frequently referred to as the King of Cocktails) remembers, “You did not see women behind the bar in the 1970s and ’80s in big cities. You just didn’t. It was considered a man’s world.” In 1986, when DeGroff opened New York’s famous Rainbow Room, he hired four women to tend bar: “That’s probably four more women than anyone else around had hired.”

Not only did DeGroff give women a chance, he pioneered a craft approach to classic cocktails and has been credited with reinventing the bartending profession. One of his protegees was Audrey Saunders. Today, she’s one of the most notable figures in the cocktail world and paved the way for a new generation of female bartenders in New York in the 1990s. In 2004, Saunders opened the Pegu Club in New York, where she created one of her most iconic cocktails, The Old Cuban. A fine variation on the Mojito, the cocktail is recognised internationally as a modern classic.

In Australia today, bartending (and hospitality in general) remains a male-dominated industry. Although it may be normal to see at least one woman behind the bar, the old challenges are still present. Women often have to deal with discrimination and sexual harassment. “Some customers still do not want my opinion or advice on whisky and beer because I’m ‘girly’ and drinks still get gendered,” says Claudia Morgan, bartender at Mechanics Institute in Perth. Many bartenders know the request for a “manly glass” all too well.

Times are changing though, and diversity in the workplace is being recognised as positive for everyone. “Women bring different perspectives and ideas to help us thrive in this lucrative and ever-changing industry,” says Louise Richardson from The Flour Factory. Perth’s bar scene is a tight-knit, co-ed crew and some of WA’s best bartenders, managers, and owners are women. Bree Rayner, a partner at Perth venues El Grotto and Si Paradiso, is one of many women employed across the two venues: “We have a really strong group of talented women, with 13 across both venues, which includes a head chef, chefs, an assistant manager, bartenders, waitstaff and myself in the ownership group covering finance and business.”

At Tiny’s, superstars like Jessica Arnott (Masterchef finalist and former Diageo representative) and Emma Crisp (Bartender Magazine’s 2018 rookie of the year) hold court in the liquor emporium and bar, respectively. At the State Buildings, Emma Farrelly – reigning Australian Gourmet Traveller sommelier of the year – oversees the wine lists for seven venues in the precinct including Wildflower, Long Chim and Petition. With so much female talent in WA’s bartending ranks, things look like they’re heading in the right direction, but that doesn’t mean we can be complacent.

After realising there wasn’t a platform for women to network, support each other and discuss issues relating to our industry in Western Australia, I co-founded LOLLA (Ladies of Liquor and Larder Australia) with three of my peers – Claudia Morgan, Dhiva Thangathurai and Maria Marter. Since its inception in early 2018, LOLLA has attracted more than 200 members, including bartenders, chefs, distillers, brewers and baristas. We discuss issues in the workplace and provide support both online and offline through events, masterclasses and regular meet-ups. In a male-dominated industry, it’s so important that female bartenders are supportive of one another.

Whatever your industry or location, International Women’s Day is a focal point in the women’s rights movement. It’s a day to acknowledge the hurdles that have been overcome, recognise the hard work and dedication of the women who preceded us, and celebrate what it means to be a woman in the world today. Women have come a long way in the hospitality industry, and we’re now seeing a rise not just in the number of women working in bars, but those holding managerial positions and being recognised for their work as successful businesspeople. But don’t just take my word for it. Next time you’re at the bar, strike up a conversation with one of the women on shift. There’s a good chance she’s worked very hard to fill your cup.

Elise Godwin is bar manager at Fremantle's Strange Company and was the sole woman top 20 finalist in the Australian leg of the 2018 Diageo World Class Cocktail Competition. 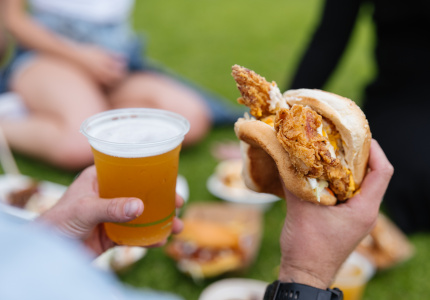